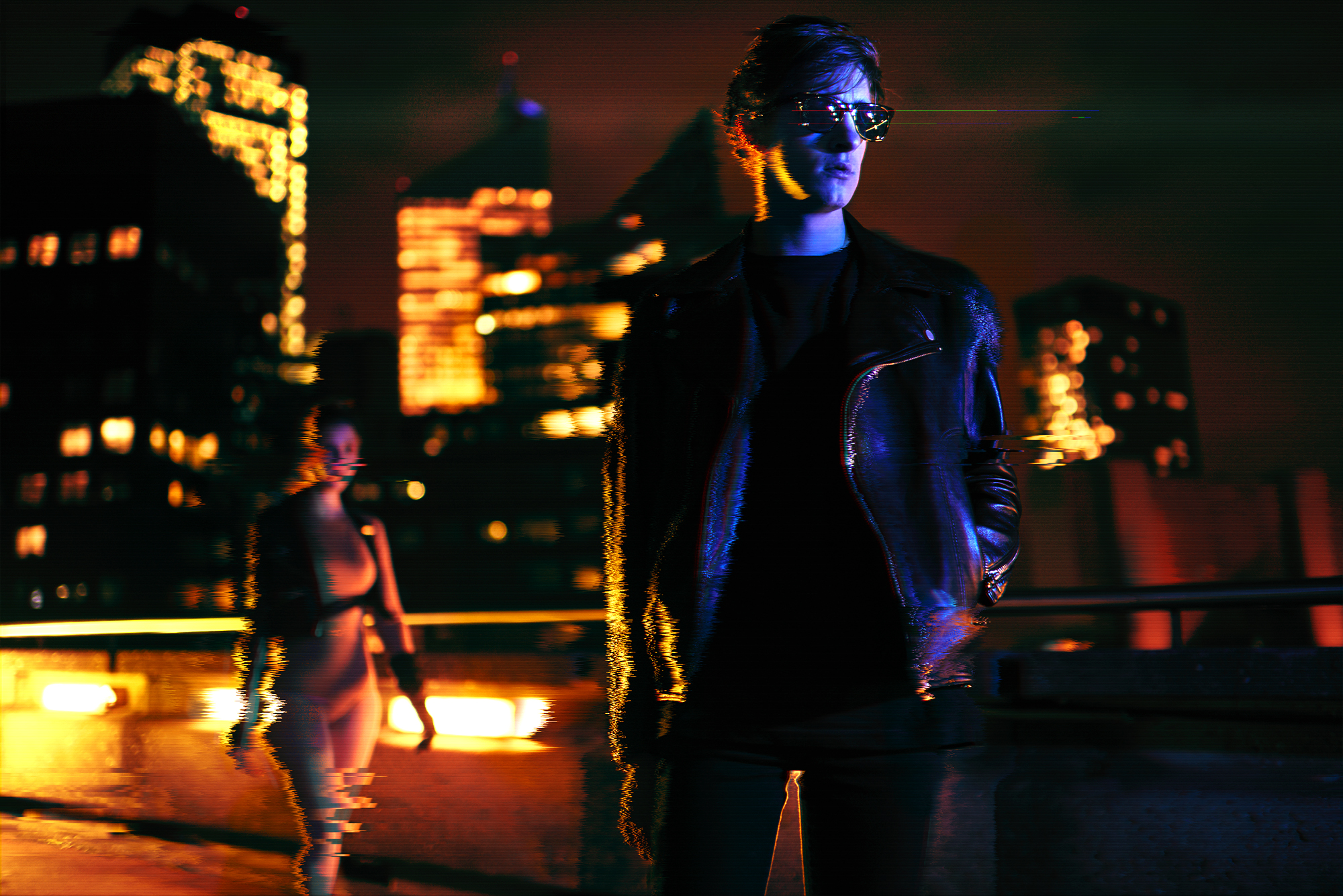 French electronic visionary James Kent began his career in black metal bands to significant struggle. Imparting his love of darkness, he set out experimenting with synthesizers and, in 2012, birthed cyberpunk-inspired synth music under the moniker Perturbator. His music steps directly out of post-apocalyptic anime, horror and dystopian narrative with a particular bend toward ’80s sci-fi horror. It would be a wonder if John Carpenter and Paul Verhoeven were not already massive Kent fanboys. A smoke-laden and heftily packed Metro Music Hall stage donned the spacey and stygian trappings of Kent’s production via imposing light towers pulled straight from Tron. The crowd was unmistakably metal as were the opening acts, which apparently had been a specific request of Kent. Way to tip your hat to your origins, Perturbator! Local three-piece band Darklord was fronted by raucous female vocals and the obligatory, onstage, topless-demon acolyte with a strapped-on sex accessory. I was pleasantly shocked by the bravado of Darklord to bring a delightfully gender-queer goat creature cosplayer to the presentation of their sacrilegious set. Fellow homegrown heavy metal band Visigoth brought driving guitars and grand, fantastical lyrics juxtaposed somewhat appropriately with the frontman Jake Rogers’ crutches from an unfortunate (yet very metal) recent motorcycle accident. For a moment, I expected a tiny replica henge to float down from skyward and land near the lead guitarist’s feet. Instead, the audience were thankfully regaled with said crutches being creatively used for air guitar towards the end of Visigoth’s impressively bombastic set.

A near blinding waveform of LED towers hovered over clustered synths and a drum machine for Perturbator’s turn, which began late in the evening to a yet unfatigued crowd. Immediately, Metro was overcome by intense, sometimes ambient EDM driven by a single hooded character behind a spaceship-like stage prop. From appearances, Kent seems barely seasoned enough to get through the venue’s 21-and-older age restriction, yet his craftwork is unstoppably sophisticated and informed by the methods of veteran synth predecessors. Kent’s music wanders hypnotically through electronic landscapes fitting of the most cryptic corners of The Grid or The Matrix. The live performance of his multiple albums and EPs leaves out the majority of vocally assisted tracks and opts for the methodology of his house and dubstep cohorts. The light display would not be recommended for audiences prone to epilepsy to say the least, yet the use of frantic illumination seemed fitting for the frenetics of the music. One might go so far as to say the light show veers toward perturbing at times, if one is interested in terrible jokes.

Kent’s crowd engagement is fairly minimal, as he bobs wildly behind his stage props and his impressive array of delightful noise-making machines. Occasionally, Kent would gesture to the crowd in encouragement, who was never left wanting. As a recent follower of Perturbator, I was challenged to distinguish familiar tunes as the set list linked together forming an extended wall of synthetic sound that sometimes felt unceasingly blurred. Upon allowing myself to absorb more fully in the sonic intoxication, I found the boundlessness of Kent’s live performance more enjoyable. If they’ve not already, ’80s synth, new wave, house and vapor wave fans would do well to get on board the Perturbator train alongside the willing ilk of the metalheads. The audience remained rapt for the duration of the set, including the more elaborately costumed and bedecked goth kids. I would have enjoyed hearing Kent translate some of my favorite tracks, which were left from the list, yet overall, the performance of Perturbator was a worthy expenditure of a late Wednesday night. From the feel of the eyeliner and spiked crowd, James Kent via Perturbator has already earned a solid following from several darkness-loving communities. The show Kent provides is an energizing blend of madness and melodic trance worth the ringing ears and mechanized nightmares.