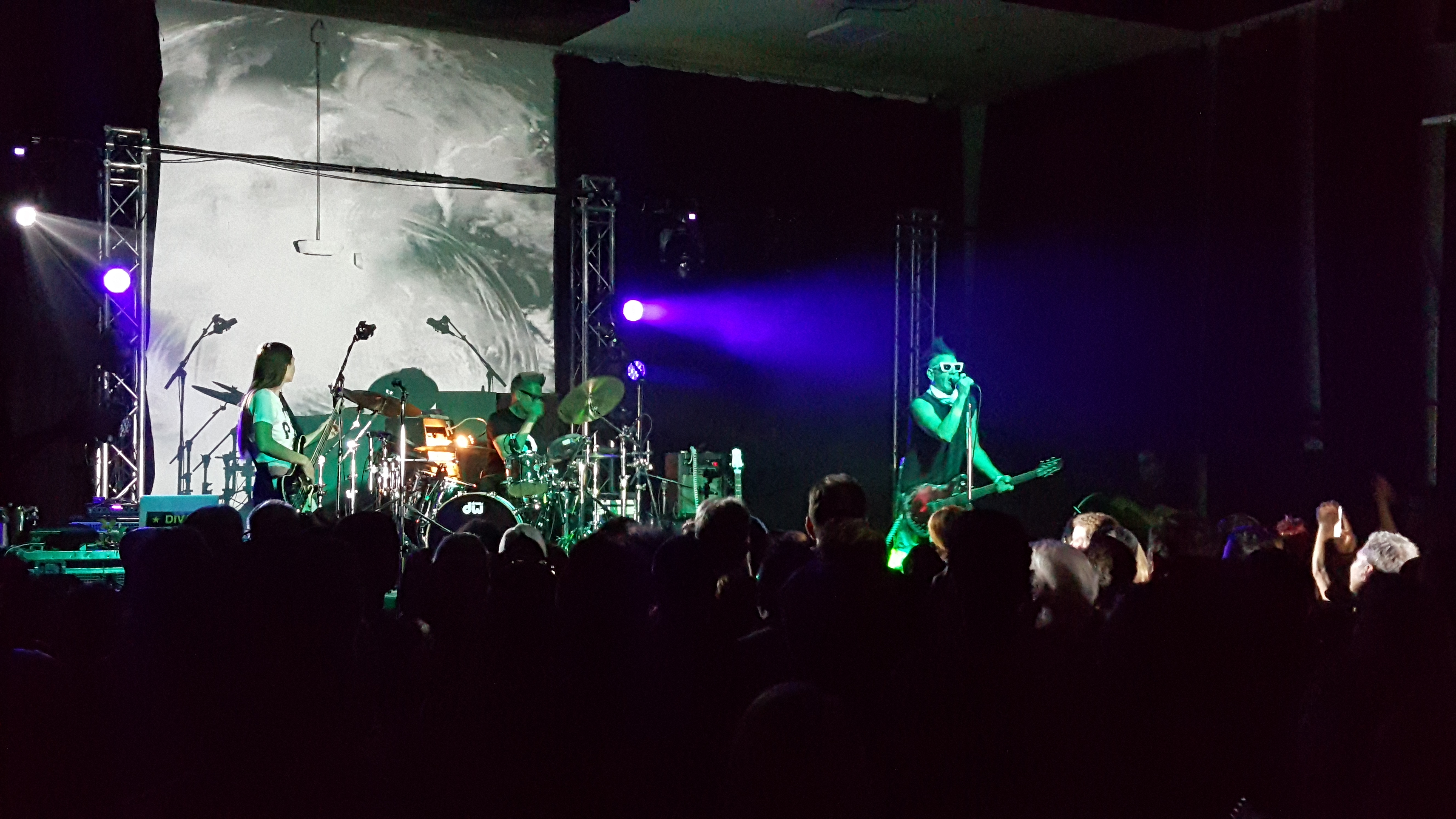 “Mirror People,” “Love Me,” “Christian Says,” Slice of Life”—how many times have I and many of (gross) my generation heard these songs during the past 30-plus years?

Since, like, 1988, I have literally watched—with my eyeballs—variations on this theme, from a Bauhaus reunion tour to Love and Rockets (many times), Ash and Murphy solo, Murphy as Dalis [sic] Car, J with The Jazz Butcher, at living room shows and as a producer on some friends’ album (I had the opportunity to have him coach me on Theremin and bowed cymbal work on said record—yay for me).

These guys keep coming back from film jobs, solo stuff and seeming retirement because, I would hope, they still enjoy playing this old music. Sure, the money is a driving factor, but that paycheck is only there because of their jump-in-front-of-a-train, diehard fans. I guess audience interest is why any musician gets work, duh. But with bands born during the spikes, combat boots, feral hair, clove-cigarette cultish era of teen angst, the relationship is a different type of cemented bond. Why? Blanket statement:

(And, for me, Tones on Tail, the most peculiar of the fold, is the reason I purchased a four-track and started making music.)

Unlike whatever current pop flavor is filling stadiums full of people who have no qualms stealing the flavor’s shit before it’s out, we Bauhaus fans will spend extra on exclusive vinyl, the Japanese import, the Argentine remix and whatever merch we can(not) afford. We are reverent, do not talk over the band, and might seem a bit bored because we are putting each note in a mental catalog to later compare and contrast with previous shows. We will cough up $100 plus airfare plus sleep-deprivation to see an incarnation of this 39-year-old outfit.

Four-hundred and ninety-nine people and I recently did some variety of the latter.

Poptone is a collective of Haskins, Ash and Haskins’s daughter, Diva Dompe, replacing L&R’s’ J (and one-time collaborator Glenn Campling) on bass. The group came together based on an early-morning “I need to play my body of work again” epiphany from Ash. With seeds in place, they practiced and quietly advertised two shows at Los Angeles’ (circa Glendale) Swing House, a well-equipped studio with a soundstage largely utilized as a practice space for bands prepping to go on tour. The promise of these gigs was “songs from Bauhaus, Tones on Tail, Love and Rockets and Daniel Ash”—and a rumor of The Bubblemen stopping by.

Those two shows sold out in a matter of hours.* No one who purchased this $100 ticket (accompanied with a shirt and sticker) knew how this facelift would sound. Ash has had an obsession with dubstep over the past few years, Dompe runs the gamut—from work with partner Matthewdavid to bedroom project twee to dark jangly stuff with her sister to ambient meditation—and Haskins is involved in commercial work. This isn’t the same experience as seeing the Rolling Stones who wheel out hits that sound exactly how they have since the ’60s (no offense, Rolling Stones). You get the point: We took a leap of faith based on our passion for these songs and our idols. And we never, ever want to have our hearts broken by some weird interpretation or otherwise fucked-up version of the gems we guard in our hearts.

From the first few engulfing tremolo strums by Ash on the cover of “Heartbreak Hotel,” it became evident that his loud style will always be a murderous dragon of augmenting proportions. Haskins, behind his hybrid kit of acoustic drums, electronic pads and mid-’90s samplers, still hits hard, manages a precise 16th-note cymbal ostinato while juggling the punctuated blips and sound effects (he snuck in a guitar lick from Bauhaus’ “The Three Shadows” on “Movement of Fear,” which made me smile and think “I heard that!”).

All good so far, but how will young Diva Dompe fit in?! There are many haunted shoes to fill. Looking over the floor, I saw and heard—and felt—a communal, emotional exhale of the breath we had all held before she hit the first notes of her fuzz-tone fueled Rickenbacker. Hands slowly raised, whoops and hollers of “Diva” happened.

The sight and sound is an amazing dichotomy. Dompe is tall, lanky, graceful, blonde hair down her back, thoughts focused, meditative stare (she is an expert in that field) while owning the same look of innocence her dad still sports. She isn’t moving much while her fingers gently pluck like a jazz player, but the sound …

It is huge. She has her own dragon (and she has definitely been wood shedding these songs).

After a few tracks it was clear that Dompe is the fresh coat of paint that 1) helps these latter-’50s fuckers still want to play this stuff, and 2) now gives us middle-aged fuckers a new God in the Bauhaus mythology to stew over. For the fifth song, Tones on Tail’s “Happiness,” Ash played bass while Dompe stood at a floor tom, pounding out the timpani hits at the cadences of the original. On the record, there is a sexy little synth line that breaks up the verses. Instead, Dompe and Ash imitated that gesture with a tongue-twisting vocal scat. The only word that comes to mind is “cute,” but not in a maudlin way. Fresh paint.

And that aesthetic continued throughout the night. You could see proud papa Kevin smiling at his daughter when she nailed difficult cues. To Ash’s glam star, T-Rex-inspired growl, Dompe offers a fairy-like complement to vocal harmonies—even on the over-sexed cover of Adam Ant’s “Physical.” For “Lions” and “Twist,” two of the more intimate and odd offerings from the Tones on Tail library, Dompe fired up her laptop and MIDI controller and hunkered down on organ sounds and driving drum machine. I know I’ve already belabored the point, but having my aloof expectations fulfilled with “Oh, that’s how you’re going to pull off that sound” made me glad I didn’t dismiss this gig as an “open the coffin, dig out the music, let’s do it again” moment. We already do that plenty with Mozart, Brahms, Santana, Journey, AC/DC etc.

The other fun experience was watching my friend Oliver react. Though steeped in the Bauhaus oeuvre, he never had the opportunity to see more than Daniel Ash in concert. At any pause, he would smile and whisper, “This is so good.” From a middle-aged, jaded, saw-this-before, I’m-here-for-music-grafted-into- my-bones fucker, that’s all I ask. It was so good.

*A bunch of North America dates are happening, including June 21 at The Depot in Salt Lake City.