At the end of the night, every band—whether strictly psych or loosely psych-related—gave killer performances that words couldn’t do more justice explaining than eyes and ears. But those who missed tonight had a chance of redemption at catching the second half of Psych Lake City tomorrow. And for those of us who did go tonight, we have every reason to be fucking stoked. 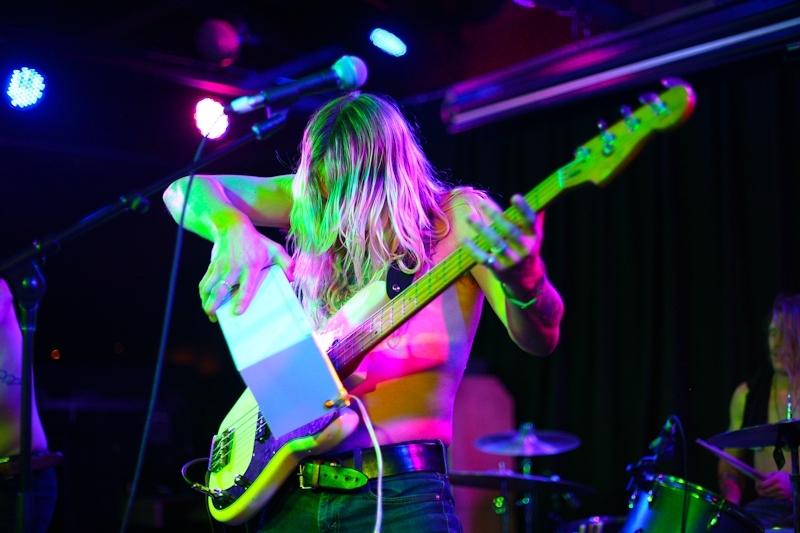 As a short disclaimer, this was my first time attending an all-psych (or psych-related) show comprised of local bands. At multiple points throughout the night, I was surprised and felt like certain expectations were never going to be met, only to stand corrected at the most bizarre and arbitrary moments. However, I promise you up front that I will never use the idiom of being “psyched out” to emphasize this throughout this review. But seriously, it really was surprising how fucking well everything turned out.

An hour after the doors first opened at the Urban Lounge, clientele was still a bit sparse once the opening act, Season of the Witch, took the stage. Singlehandedly, these guys were the most to-the-letter incarnation of the psych genre—at least when it comes to appearances. They sported the ‘60s Haight-Ashbury look and (assumedly) listened to a lot of Ravi Shankar—or whichever the modern day equivalent may be. Even with the few number of bodies to play to, they managed to gather mostly all of them upfront by covering Spell Talk as their opener. From there on, they churned out abstractedly mind-melting tracks that would’ve been strong enough to throw any sober thinking person into a distrusting relationship with reality.

One of the most off-putting yet notable aspects of this band was the two female miscellaneous instrumentalists (which is fancy-talk for people who play the tambourine). These two Manson girls would sway insipidly to the music while giving vacant glances out to the venue’s back wall and, on occasion, fetch instruments for the guitarists between tracks. Based solely on explanation, this part seems a bit too novelty and forced, but in person the dynamic looked too natural and thoughtless. But this is psych music—I believe there is an unspoken law about thinking too much about anything in particular while it is playing at any time.

After Season of the Witch’s set, the night slowly segued from purebred psych to the hybrids and the moderate influences. From this moment on, the smell of sagebrush was replaced by the stench of sweat and beer. Colorful dashikis were replaced by dudes not wearing shirts at all. Season of the Witch’s leftover residual ambiance was cleaved in half by the paunchy and thrashy atmosphere by the succeeding act, Breakers.

Breakers produced a conflux of surf rock riffs entwined with Brit Rock punk melodies and insane amounts of vocal howling that slapped any listeners still narcotized from the previous set back into the harsh reality. In comparison to other bands, every single song seemed to clock in at shorter lengths—but this probably works to their advantage since I quickly developed a potato chip hunger for more. These dudes definitely had the kinetic wherewithal to whip every dormant molecule within the venue into an explosive frenzy.

Soon after Breakers ripped through their set, The North Valley saddled onto the stage. I haven’t personally heard them live before, and I quickly derided myself for it. The North Valley’s style seemed to burrow head-on into classic roots rock. They doled out shimmering ‘70s AM guitar hooks only to glaze back over them with blooming vocal harmonies. I pulled out my cellphone and fat-fingered a partially illegible note to remind myself to check out more of their latest album during my next available window of sobriety. Portable notation technology is a godsend like that for anybody who prefers live music and beer in combination.

There seemed to be a little bit more of a pregnant wait in between sets before the upcoming act, but nobody looked the least bit scathed, since in a short while the entire venue floor was going to soon rally together to shout their cathartic excitement long-time Salt Lake beloveds, Max Pain and the Groovies.

If you’re reading this—or if you’re even living in Salt Lake at all—then chances are that you know who the Groovies are, or have had least heard them. They really need no introduction, as they’ve probably been written about at least once at some time or another by every music writer within the state.

Being as tired as I was at this point and having seen the Groovies before, I wasn’t sure if I would’ve been able to muster enough strength to lend focus to their entire set. However, this all quickly became a non-issue since the first twenty seconds of their rock-solid set became an epinephrine to the thigh. This is the kind of effect they have on all of us. This is why we love them.

Vocalist/keyboardist/everything-ist, David Johnson, quickly lured the crowd instantly in a Svengali display of stage presence, movements, gestures and spot-on singing. It’s ostensible why these guys are colloquially termed as “Salt Lake’s Growlers,” and the way they handled themselves on stage thinned any margins of contrast in terms of talent. Also, their merch guy was selling their shirts and CDs like he was selling them from door to door, which is always respectable.

At the end of the night, every band—whether strictly psych or loosely psych-related—gave killer performances that words couldn’t do more justice explaining than eyes and ears. But those who missed tonight had a chance of redemption at catching the second half of Psych Lake City tomorrow. And for those of us who did go tonight, we have every reason to be fucking stoked.

Check out photos from the night here.