The lineup and show from the previous night was pretty solid, and I was all too eager to see how tonight was going to play off in contrast. And the fact that Spell Talk’s name was on the marquee stood out in my mind as a proverbial safety net if, for whatever reasons, the other bands didn’t deliver. Of course—again—this didn’t turn out to be the case. 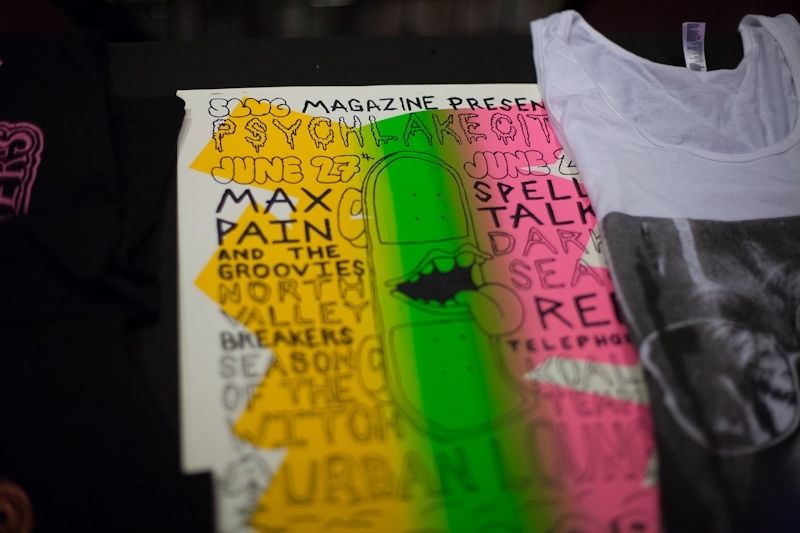 Alright, here we go with round two of Psych Lake City. The lineup and show from the previous night was pretty solid, and I was all too eager to see how tonight was going to play off in contrast. And the fact that Spell Talk’s name was on the marquee stood out in my mind as a proverbial safety net if, for whatever reasons, the other bands didn’t deliver. Of course—again—this didn’t turn out to be the case.

While glancing over the night’s lineup again, the divide between the two nights became a little bit less transparent. Being somewhat more familiar with tonight’s lineup, it was obvious that this show was going to be more so comprised of the laidback and mellow as opposed to last night’s raucous and gritty. So since last night was The Seeds then it’s reasonable that tonight is Strawberry Alarm Clock—figuratively speaking, of course.

Tonight’s psych block was opened by the three-piece Koala Temple. I had the pleasure of reviewing their recent release within the past month (which was fairly good) so I was already familiar with a sizable chunk of the songs they performed. Their performance was packed to the brim with pop hooks buried under cascading layers of guitar distortion and intermediately-placed oscillating crescendos—the bread and butter for the ears of your average psych aficionado. For just being three dudes, they were able to keep the music thick and constant, but I cannot even fathom the intensity if these dudes ever decide to pick up an organist and a horn player in the near future.

A short while after Koala Temple exited the stage, Red Telephone donned their about faces and shoehorned their hazy, AM gold riffs throughout every pocket of the venue while producing a similar atmospheric disposition as the previous band. Koala Temple looked like stoners that would inadvertently get into half-baked existential discussions, whereas Red Telephone looked like stoners who’d respond with “Whatever, man” before eating cinnamon buns out of a pan with a grilling fork. The band’s navel-gazing set shuffled into the night’s mix perfectly, providing an adequate bridge onto the next band.

As an agreeing nod to fellow fans, I could attest that Dark Seas’ psych-surf guitar work and slurring croon vocalizations are very reminiscent of The Doors, before Jim Morrison became heavily involved in shitty poetry and carbohydrates. With their train-like percussion, simplistically uptempo bass lines and torrential jangly guitar riffs, Dark Seas had people off their asses and swaying side to side. It was quite difficult not to rhythmically move some muscle in response, like trying to ignore an itch that grew with intensity over time. Also, beer definitely helps.

Once Dark Seas put their performance to rest, hordes of show-goers started to pour into the Urban Lounge like agoraphobic refugees. Preemptively closing my bar tab was not only a wise decision, but a time-consuming one, as the bartender had so many open tabs that the stack of credit cards looked like a casino dealer’s deck from afar. It’s times like these where I become a bit more appreciative of my uniquely grotesque Slavic surname. I made it back in time a few seconds after Spell Talk started. Suffice to say, shit exploded and mayhem ensued.

Not only is Spell Talk one of the few bands that will always be personas-grata among local circles, but it’s been a long time since they’ve played a live show. They are a band that SLUG has solely written in literal volumes about and has a well-seated place in every local rock band’s lexicon. Although I can’t bring anything new to the table about Spell Talk that hasn’t been covered before, some things just bear repeating—these guys really fucking rock. Everyone who was not at that set at that time was henceforth properly deemed as “suckers.”

If all of this year’s Psych Lake City was tantamount to a hallucinogenic drug trip (because, it’s psych) then this final act would be the equivalent of the drug trip’s peak. The sound of the guitar riffs, from the more abstract tracks, were powerful and solid enough to make the average person believe that they had synesthesia, and the southern and gritty tracks carried the force of a freight train that was capable of bulldozing any drunk back into sobriety. To have such a stellar band put the kibosh on an already awesome night was too much to handle.

Not until right after the end of the last set had I realized how much I was pining to hear all of the music that I did tonight. As I mentioned earlier, comparing tonight with last night wasn’t exactly comparing apples to apples, but the entire marquee of tonight was like a second wind that’s incredibly awesome in its own regard. It was definitely more practical that they separated the two line-ups into two separate nights instead of attempting to do a redeye marathon show—getting the rest and energy in between was definitely needed since every ounce of it was spent on both occasions.

Whether as a writer or an attendee, you bet your ass I’m going to catch the next Psych Lake City. And it’s in your best interest that you do too.