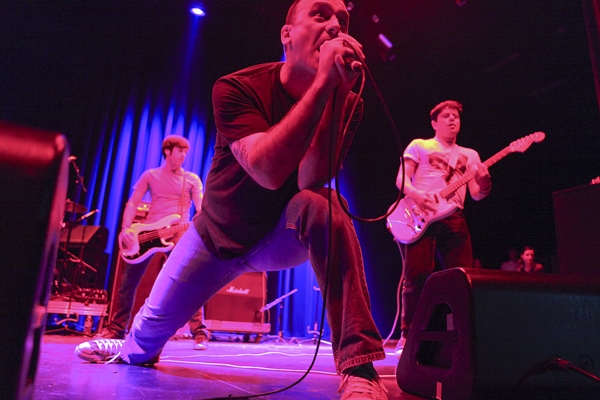 Punk’s Dead Concert Shoot With Indiegogo Fans @ The Complex 06.20 with Screeching Weasel, The...

Opening up tonight’s festivities, Gwendolyn Giles (Dog Party) shouts out “We are Dog Party from California and we are here to party!” This is perhaps the most appropriate thing to say to the hundreds (with still many more piling in) of punk rockers, many of whom have braved long journeys and the intense Utah heat to come be a part of movie history. The popularity of director James Merendino’s cult classic SLC Punk! is more than evident, as more than three quarters of the crowd appears to be from out of town. The filming of this new movie is not without some criticism. Local punk rocker and concert-goer who goes under the name Goblin says “It’s cool seeing this many people at the show, but it’s a bummer because of the circumstances. I’d say that 70% here are not from here and they’re supporting a movie about our town, our home.”

Others have similar points of few. Local concert-goer who uses the moniker Hot Kitty From Hell says, “Unfortunately, this is not a punk show, it’s a film production. But I love that my friends are playing. So I had to come support.” Despite some contest to this concerts authenticity, it is safe to say that many do not mind. As the raw, poppy sound of Dog Party’s “Jet Black” blares over the audience, it is almost easy to forget the camera hovering over the moshing crowd of punks.

Dog Party’s set is quite simply brilliant. Their combination of heavy guitar riffs with intense drumming courtesy of Lucy Giles gave their act the much needed edgy feel. Their performance kind of reminds me a bit of the White Stripes with some Wanda Jackson styled vocals. Though the set is short and sweet, the set up for Ulteriors is even shorter. This local Salt Lake group blasts out a forceful street-punk style attack onto their eager audience, giving the out-of-towners a taste of what SLC has to offer. The Ulteriors invoke a passionate response from their captivated audience, who begin moshing about. This act of brutal thrashing is perhaps one of the better ways to show you are enjoying a punk gig, letting out your aggression and angst in a circle pit filled with like-minded individuals. This is a constant throughout the gig.

The next act, Eight Bucks Experiment (Extreme Corporal Punishment) takes to the stage. This time though, the set is a bit more scripted. During the bands set up, the actor who plays Heroin Bobs son jumps onto the stage to give a speech to egg on the punks. While the cast and crew get things ready for this segment of the concert I make my way toward the merch area to peruse the records and get some insight regarding tonight’s event. Catching Ulteriors’ Eric Morris Anderson manning their merch table along with his wife, I ask him for his take on the film. “Based on my experience,” he says, “it was very much accurate in a funny way.” Though he takes care to point out that the original is not a documentary, but it inspires kids to get into punk. This thought is furthered by Giles (Gwendolyn) who says Dog Party’s reason for being here is “Getting people about punk, bringing it back.”

Walking back to observe the Eight Buck Experiment segment of the show, one cannot help but notice the over enthusiastic participation of the audience. This is perhaps due to this group being the most featured part of the new film, as well as being from the original. Eight Buck Experiment brings forth a powerful blend of street-punk meets hardcore into the fold. Their heavy numbers invoke the full monty of moshing and crowd surfing. Their performance gives the show a certain passion that remains a standard through the rest of the gig.

After what seems like a lengthy break after the Eight Buck Experiment performance, the Dwarves bring on the brutality of raw hardcore punk rock. Their presence is commanding and the studded jock strapped, luchador masked guitarist definitely adds to the effect. Blag Dahlia’s words, “We are your politically correct band for the evening,” sets the tone for their segment, since it is clear they are not anything near politically correct. Wasting little time for meaningless pleasantries, they launch into classic numbers like “Let’s Get High and Fuck Some Sluts,” and “You Gotta Burn.” Their performance on stage seems to inspire a certain captive obedience from the thrashing audience. This is obvious from the constant cheering on from the crowd, which serves to egg on the Dwarves savage show.

In comparison to the hard core of the Dwarves, Screeching Weasel lashes out with a snotty pop punk barrage. Their dramatic intro has everyone and their mother rushing back into the room to catch the last act of the evening. Theirs is a very impressive performance. Their sound is catchy and easy to get behind. But it retains a certain amount of edge to make it worthwhile. Ben Weasel takes time to banter with his audience, bringing controversies like that surrounding the Washington Redskins into light. He laments that white people knowing what’s best of Native Americans is silly.

It is clear that not all in the audience appreciate Weasel’s point of view or provocative nature. While this kind of contentious banter makes things a little more lively. Weasel takes time to offer a sort of kumbaya advice to those flipping him off. He suggests for those to turn their middle fingers into thumbs up instead. It ended up killing the heated moment, perhaps good for the shoot. Although the other bands performed well, Screeching Weasel was the only one with interactive entertainment. The banter and provocations made the last bit more interesting. It gave their brand of pop-punk more edge, thus making it more fun. This is of course led by their upbeat numbers like “The First Day of Summer” and “Cool Kids.”

The conclusion of the much anticipated gig leaves many with a feeling of satisfaction. Many have traveled from all over the states and even internationally to take part in something inspirational for punks. If anything, the showing of support proves that punk is not dead. Not even close. The camaraderie around this event is impressive to say the least. Even if this film is controversial for some, this gig helped put Salt Lake City back on the map for punk rockers. Exactly where it should and always be.