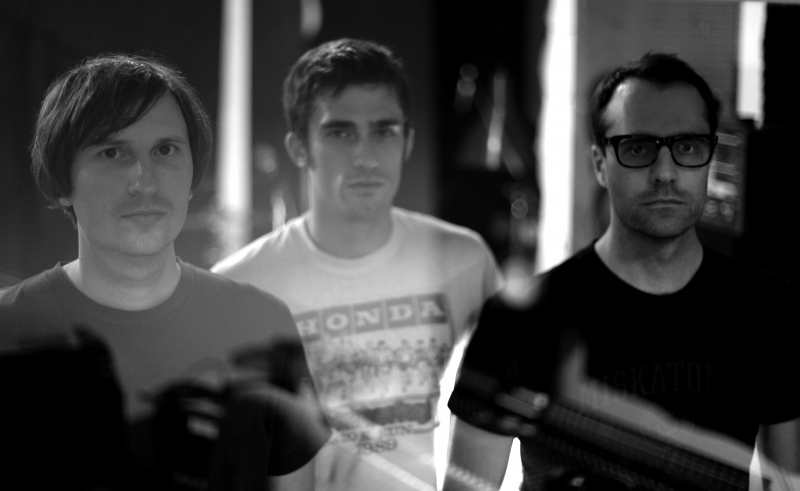 Radioactivity resolves any rock n' roll doubts.
Piercing through my consciousness like nails on a chalk board, the feedback from Murder Mystery Party’s amps brings my focus onto the band. Now, fully aware of my surroundings, I realize that I have been to this particular place before. I have again found myself at Diabolical/ Albatross Records. Again I am here to check out some of the coolest rock n’ roll gigs Salt Lake has to offer, as well as to tempt the lightening of my wallet. This place usually attracts a steady contingent of regulars, and tonight is no different. Scattered around the store are some of Salt Lake’s hip weirdo population. Some are checking out records, while most have their attention toward the makeshift stage. Though, it is at this moment that I notice the audience seems a bit smaller in size. Something I find odd, considering that tonight I am told something awesome is going to take place.Upon the conclusion of setting up their equipment, David (Murder Mystery Party) invites the audience closer on the threat of having a panic attack if they do not. The attending contingent inches forward in response. Seemingly content with their spectator’s compliance, Murder Mystery Party launches into their set, blasting through with furious fun filled fuzz-rock tunes. Adding to their distorted mayhem, someone turns on a party light toward the back of the shop. This gives the gig a sort of brightly multi-colored warped feeling. Despite the intensity of their performance, they are constantly plagued with drowned out vocals, making it near impossible to make out what they are singing.However, the onlookers appear not to mind as they were well received after concluding each number. In-between songs, David and Steve (Murder Mystery Party) crack jokes and banter with the attentive crowd. This back and forth seems to take up a sizable chunk of their act. I was warned via the Facebook event invite that I might end up pissing myself due to laughter. This doesn’t happen. Though I find the jests to be somewhat clever in nature, they were a bit awkward upon delivery. Kind of like a punk rock n’ roll version of The Smothers Brothers, but with tattoos.Murder Mystery Party concluded their short and sweet set, leaving their audience in good spirits. Not previously familiar with Suspicious Beasts, I am not sure what to expect. But to put it in few words, I was completely blown away. Blasting into their set with a furious intensity, they knocked out psych-garage like numbers with awe-inspiring energy. They overtake their captivated audience with an incredibly powerful sound, inspiring an infectious outbreak of head and knee bopping syndrome. I was severely infected too, as I found myself nearly bouncing up and down. Going through their numbers, they keep building up the energy, keeping it on a steady incline, leaving me on what would figuratively have been the edge of my seat. While I couldn’t exactly say I understood what Suspicious Beasts’ vocalist was belting out, it sounded catchy and uniquely nostalgic. Sort of giving their sound a very ‘60s psych/garage rock feel. That, in conjunction to the flashing multi-colored lights, added a certain definition. Their conclusion leaves me in a sort of daze, as the there is a sort of weird silence, where there should have been more rock n’ roll. I think their set ended too soon as I was still wanting more. It was probably a good thing, as I’m sure I had worn down the tiling below my feet due to my constant pogoing. Certainly Suspicious Beasts would be a tough act to follow, but Radioactivity by all means held their own. They immediately captivated their audience upon arrival the scene. Providing an all-out, distort your senses assault, they explode into a high energy power-pop frenzy. Initially they keep up the momentum that was started by Suspicious Beasts, but they soon exceed it, playing through their set almost non-stop. Radioactivity’s growing intensity seems to rip through their spellbound spectators, like a wave of radioactive heat that instigates severe cases of twisting and shaking. This electrifying current of inspiration is no doubt excelled by Radioactivity’s constant upbeat and hook filled numbers. By this time the audience has grown into a throbbing mass. Eagerly they feed off the bands aurora, which seems to glow off them like a multi-colored spectrum. Although, this may have been the party lights dancing off the walls of the store. Radioactivity conclusion leaves a noticeable fuzzy ringing in my ears combined with a slight numbing sensation. This is probably something that may lead hearing loss in the future. However, as I float out of the shop clutching my Suspicious Beasts 7”, I am content with my Monday evening. It is nights like this that serve to stimulate the soul and assure me that my faith in rock n’ roll is secure. Not that it was ever in doubt, but it certainly helps to have inspiration for a life motivated by teenage vice.
Photos: