Red Fang walked onstage, dressed in their finest tuxedo T-shirts, the occasion being the release date of their new album, Whales & Leeches. These guys look like the epitome of metal heads: Everyone has tattoos, long hair and glorious beards. 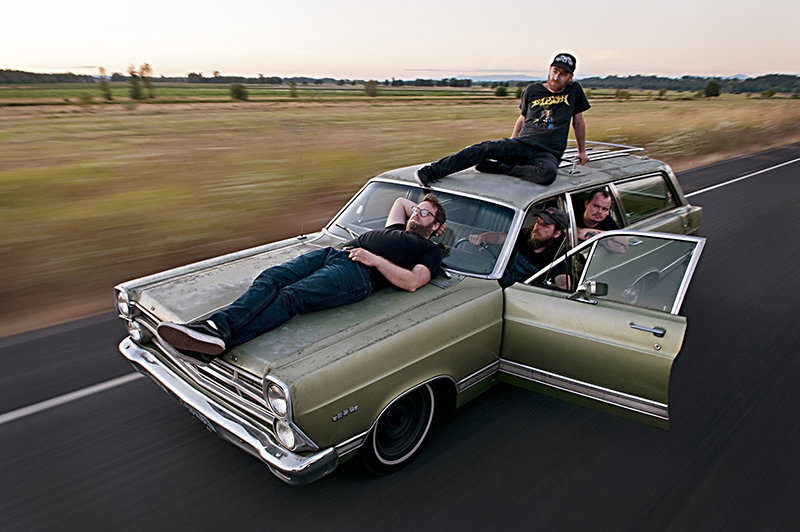 This is a shot of how Red Fang took an edge off before their hot date with Urban Lounge, during which they sonically ravaged us. Photo: James Rexroad

I stood in line for what felt like an hour. It was apparent that October had come and all I could think about was the fact that within the month, I’d be shoveling snow just to get the mail. I hate snow almost as much as I hate dry heat. Once I got into the Urban Lounge, the first thing I noticed is that they’ve done some work to refurnish the place. The back patio is lit up nicely and the booths no longer looked like they’d been transplanted from a dead restaurant. The room was packed with bearded bike-Vikings. I felt emasculated just being in their shadow.

Gaytheist kicked the show off and didn’t disappoint. First, let me announce a small bias: I freaking love Gaytheist—love them like good whiskey, love them like a campfire-scented jacket. There is something in the way they layer their sound that makes me want to drive to Portland and kiss them on the mouth. The only way I can describe Gaytheist is to take the aggressive fills and tightness exhibited by Death From Above 1979, the driving aggression that lies at the core of At The Drive-In, along with the vocal range and style of Cedric Bixler. Finally, take some pop punk, grind it up, then dust the stage with flecks of major progressions, self deprecating humor and speed. That is Gaytheist. The best thing coming out of Portland. Don’t believe me? Check out their new music video.
Enough waxing—back to the face melting. Gaytheist played a lot from last year’s Stealth Beats: Most of my favorites were played, like “Post Apocalyptic Lawsuit” that (I’m not certain because I don’t have a copy of the lyrics on hand) tells the tale of a world where there is “no one left to sue.” When I hear this song, I imagine cage-match courtrooms with gas torches at the corners. They went into some of their new album Hold Me, But Not So Tight, playing “Spread ’em,” which has a fat, fuzzy bassline supported by animistic drum beating with an uncountable amount of crunchy fills. They played a song called “I Quit!” which is about quitting your job, making a scene, but pussing out in the end. It’s an older song of theirs, but it is my new favorite.
I could go on about Gaytheist, but I’ve gotta tell you about the next band. Helms Alee, a nautical term apparently, are pretty bitchin’. A three-person band, the group is a fuzzy, melodic sludge mess that immediately grabs your attention. I had never heard them before Tuesday, and I was not disappointed in the slightest. Lead guitarist Ben Verellen has a barking/roaring quality to his voice, which is soothed by the melodic Veruca Salt–like croons of Dana James (bass) and Hozoji Matheson-Margullis (drummer). When they sing in concert, I was immediately reminded of the L.A. punk band X, which is an odd comparison, seeing that this band is as sludgy as The Melvins at times. Their song “Pretty as Pie” best summarizes the band: It begins with a starry hammer-on and pull-off sequence, which decays into a minor-key fleece metal breakdown reminiscent of Sabbath. The vocals are grungy—you can almost hear Alice In Chains if you squint your ears hard enough. Helms Alee are like mixing your cake and ice cream into a gray slurry—it doesn’t look appetizing at first, but then you take a bite and, somehow, it all works out.
Red Fang walked onstage, dressed in their finest tuxedo T-shirts, the occasion being the release date of their new album, Whales & Leeches. These guys look like the epitome of metal heads: Everyone has tattoos, long hair and glorious beards. They played quite a few songs from their last album, Mountain of Murder and some from their previous self-titled album. Hair was flying everywhere. Bennie and flannel-garbed bros bobbed in unison. Everyone lost their shit when they played “Prehistoric Dog”—the guitars in that song forces you to want to climb the tops of their amps and jump off when they sing “Nowwwwww kiss your ass goodbyeeeeee!” Red Fang’s crystalline stoner metal is tinged with Motörhead speed and Josh Homme’s song structure. I’m assuming they played some of their new stuff, because there were songs I didn’t recognize, with the exception of “Blood Like Cream.” Singing in harmonic unison with downbeat hammer chords, this song drives like a Jeep Cherokees soaked in Natural Light climbing the hills of Moab on a hot August day. It’s so good—I connected it to memories that have nothing to do with it.
Photos: