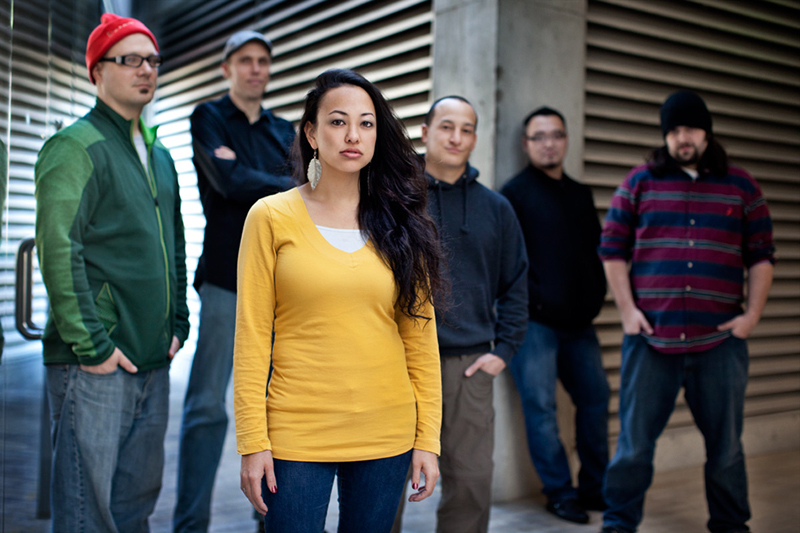 (L–R) Dan Nelson, Shaun Thomas, Sarah B, Aaron Okura, Kenji Aihara, and Josh Francis are some of the members of the Sarah B band who played The Woodshed’s Reggae Night. Photo: Jake Garn
Not to be deterred by the foreboding clouds hanging over Salt Lake City, I arrive at the Woodshed to observe the beginning of this summer’s Reggae Thursdays. Inside the atmosphere is joyful—everyone seems to know each other. Although I arrive early, the already present (and filing in) audience represents a somewhat diverse crowd. Tonight seems to bring out Salt Lake’s devoted reggae enthusiasts, the curious regulars and everyone in-between. Since the entertainment starts late, the patrons get loose and comfortable with steins, shots and other means of leisure, all perfect for easy listening in a loose atmosphere. When he noticed that I had my notebook in hand with pen hovering over a blank page, Drew Zayach (Tribe of I) approached me to offer some background regarding tonight’s festivities.The purpose of Reggae Thursdays is to bring back a sense of community to the reggae scene while also removing the perceived taboo associated with reggae music. He notes that even though reggae has been a part of Utah culture for over fifteen years, the mainstream doesn’t support the music. Rather, bands that offer quality music are subject to being replaced by cheaper DJs. Furthermore, he wants to get back to the roots of reggae. According to Zayach, the music “represents the people.” He emphasizes that because of this, it promotes a positive aggression that is delivered via an uplifting sound. In practice, this means supporting everything local, if possible. This is done through promoting and playing a music style that doesn’t bash anyone, doesn’t seem threatening and is, overall, inviting.Tribe of I takes to the makeshift stage on the back patio of the Woodshed. When they kick off, Tribe of I is well received—they play with a Cali-rock influenced reggae style. Their sound is consistent and easy to groove to, providing a heavy, cool intensity. There are some fans in the audience. Their set is appealing to the ears and easy to jive to, due to the poppy element combined with the offbeat. This is reflected by the fact that those not dancing are the minority throughout the set. After a while, Tribe of I spices things up by mixing a funk element with heavy breakdowns. This is heard through numbers like “Nanna Bird,” which carries a clear hip-hop influence, Evident in Zayach’s vocals.In contrast to Tribe of I, Sarah B Band blends a soul-filled groove that brings the audience into a captive state. The vocalist, Sarah Okura, provides harmonies that are worthy of being on a Trojan Sisters compilation. I am lured toward the front by this melodic aura, much like everyone else here. Okura delivers soothing, soul-filled lyrics that inspire the euphoria of love straight from the heart—similar to what one feels when experiencing a spiritual encounter and being inspired into feeling an intense empathy for those around you. It is soothing and reassuring in a way, and apart from the beer, I’m relatively sober. Overall, it is an exciting sound that invokes a strong nostalgia for the roots reggae of the ‘60s and ‘70s. Their presence on stage is very unassuming—humble, yet powerful.On the second day, I arrive early enough to grab a drink and collect myself before the fun begins. Tonight’s gig utilizes the Woodshed’s interior stage. The bar seems more crowded than it did the night before. Catching a few familiar faces, I choose a good place close to the dance floor to catch the first act, Patwa. Their set up is lengthy—something I’ve grown accustomed to. After a while of observing various members pluck strings and twist knobs, my patience pays off. Patwa has a solid, commanding stage presence. This is not an authoritative presence, but one that is charismatic, with a relaxed feel. They remind me of The Melodeons combined with the vocals of Barrington Levi. Consistent and pleasant, it reminds me of ‘60s roots reggae, giving it an air of authenticity. Going through each number, they dish out beats to satisfy the soul. The audience responds by grooving to each tune, as if caught in a trance.

The Green Leaves’ stage presence provides a very different feel than that of the other bands that have played so far. Initially playing a sort of jazz-reggae fusion, they move on through other genres, like hip-hop, to complete their sound. Much like Tribe of I, they have a more globalized influence to their style. This constantly upbeat performance causes the audience to break out into sporadic dancing. I think this may be something you simply do by letting go and allowing the tune to carry you. This is not hard—the entire event offers an inviting environment, allowing for a true feeling of comfort and being at ease. After playing both covers and originals, their closing number is a Ska version of “Stand By Me,” which inspires a break out of bouncing around and singing along from a devoted audience, to which yours truly cannot resist.

The last group The Rocksteadys blast into something that is not quite rock steady. Rather it is progressive rock combined with funk that has a clear reggae offbeat. They are perhaps a perfect example of how far the term “reggae” can be stretched. The Rocksteadys’ set is easy on the ears and leads one onto the dance floor via the colorful stage lights. Their first number carries the listener through a borderline psychedelic sound. However, switching gears in their second tune, they dish out more reggae-influenced songs. Throughout their set they explore various types of reggae, though their rock style is more defined. Their breakdowns keep me hooked—like diving into cold water to stay alert. They knock out feel-good numbers that allow one to walk away one a positive note. This is clear, as by the end of their set there are shouts for an encore.

In my humble opinion, Sarah B Band is easily the best that Utah’s reggae scene has to offer. That being said, all of the bands mentioned provided good entertainment that had their audiences leaving the bar in good spirits. Then again, that seems to be the nature of this music. It is easy to walk away happy and somewhat content with life after a gig like this. Each band that played represents a part of the globalized aspect of this genre. This gave the performances a certain level of diversity that complemented and built on each other. Simply put, this event was well done, as those setting it up provided an inviting and friendly atmosphere for any wishing to attend. I’d recommend readers find time this summer to enjoy a Reggae Thursday. You won’t be disappointed. Though I am a rock n’ roller till the day I’m six feet deep, I agree with what concertgoer Alisi said about the music here, “you can tell it’s from the soul.”