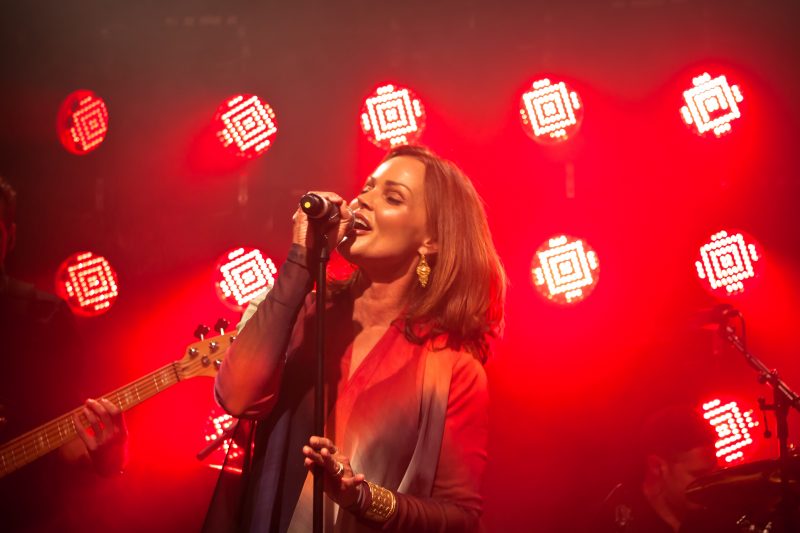 Festivals are strange entities with their own distinct personalities. In early July, I spent 12 hours standing in Hyde Park under an uncommonly hot sun to watch six bands. Friday night, I saw six bands in less than four hours at the Red Butte Garden Amphitheatre. The sun was still uncommonly hot. At least this time I’ve been allowed an umbrella and a small stretch of grass to sit.

At both shows the opening acts played for a similar amount of time. The major difference in format was that Friday’s Retro Futura traveling new wave festival was able to blow through the first three acts without having a stage changeover. Annabella Lwin, Limhal and Tony Lewis used the same backing band with only the slightest of lineup variation.

It’s an unusual but economical setup that allows artists who might not be able to book a national tour on their own to visit cities they wouldn’t typically play. In fact, all three of the early acts reference the fact that this is the first time that they’ve played in Salt Lake City. Let that sink in: The lead singers of Bow Wow Wow, Kajagoogoo and The Outfield have never played in Salt Lake City, a place where the longevity of first-wave new wave lasted into the late ’90s.

The evening begins with a five-song set from Annabella Lwin, the former singer for Bow Wow Wow. We’re given the hits “Aphrodisiac,” “Do You Wanna Hold Me?” and “I Want Candy” with a pair of lesser known tracks, “Baby, Oh No!” and “The Man Mountain.”

The audience isn’t nearly as lively as I’d expect. Maybe it’s the heat or the fact that many of them had been standing in a line for numerous hours in hopes of getting a prime spot near the front of the stage.

Next is Limahl, the incredibly fit former singer for Kajagoogoo in a tight sleeveless T-shirt. He struts his way around the stage, pausing only to vogue provocatively.

I like a fair amount of the New Romantic bands, but I never really explored Kajagoogoo’s catalog. I didn’t see the appeal in their singles “Ooh to Be Aah” and “Hang on Now” or “Too Shy.” However, I do absolutely love Limahl’s  pairing with Giorgio Moroder on the title track for the film The NeverEnding Story. Limahl played those four songs, plus a track I didn’t recognize.

Of the six bands that would play on Friday, Tony Lewis of The Outfield was the one that I knew little to nothing about. Of the five songs played, I only recognize the closing track “Your Love.” Everything else is passable AOR that would be a better fit at a Journey concert.

Lewis was annoyed by the inattentive crowd and expressed his displeasure at the general lack of energy and the numerous people who can’t seem to take their eyes off of their phones. He’s not wrong—this is the most languid audience that I’ve been a part of.

The first proper changeover comes at the halfway point as Modern English prepare to take the stage.

Like many, my affinity with Modern English revolves around their first two albums, Mesh & Lace and After the Snow, and thankfully their set is culled mostly from those two releases. They do throw in a new track from their latest release, Take Me to the Trees, that fits in nicely with the older material. The set closes with “I Melt With You” and suddenly, the crowd finds its legs and a willingness to sing along.

The first cassette tape that I ever bought all on my own was Belinda Carlisle’s “Heaven is a Place on Earth,” and while my taste in music has strayed considerably away from mainstream pop, Carlisle was the act I was looking forward to the most.

The only thing remotely disappointing about Carlisle’s performance is that it lasts for only nine songs. The set includes solo material like “Mad About You,” “I Get Weak,” Circle in the Sand” and “Leave a Light On” alongside Go-Go’s hits “Head Over Heels,” “Vacation,” “Our Lips Are Sealed” and “We Got the Beat.” She finishes her performance with “Heaven is a Place on Earth.”

The night ends with a greatest-hits set from ABC, which these days is essentially vocalist Martin Fry with a backing band. Fry oozes charisma, offering a commanding performance that is far more engaging that I was expecting. His brand of New Romantic Northern Soul is better live than it is on record. Again, it’s a fairly short set, but it includes everything that I’d hope to hear, like “The Look of Love,” “Be Near Me,” “(How to Be a) Millionaire,” “When Smokey Sings” and “Poison Arrow,” along with a handful of other tracks like “Viva Love” and “All of My Heart.”