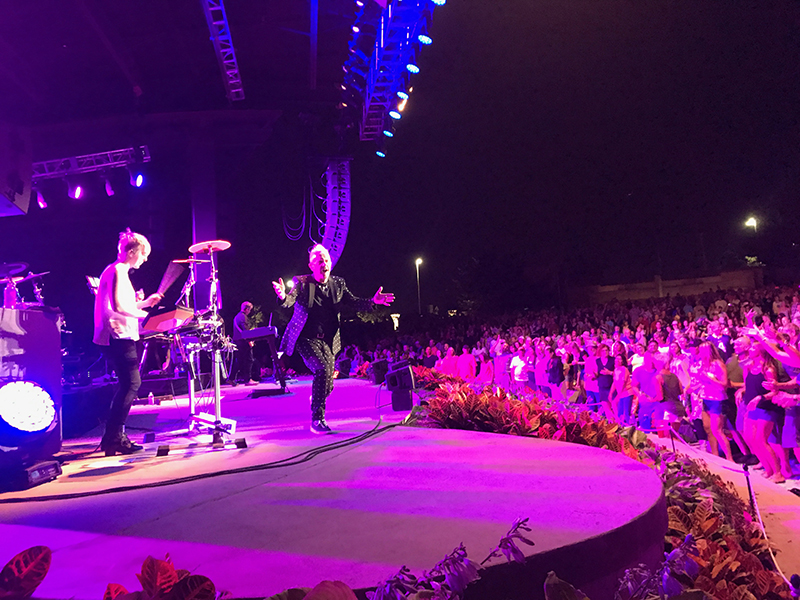 That hopeless feeling of being stranded in an airport waiting for a flight that has been delayed for four hours. Eyes on the clock, nervously texting tour managers and editors as the window to arrive in Salt Lake City and make your way to the Retro Futura Tour at the Red Butte Outdoor Concert Series begins to close.

For the tour’s stop at Red Butte, the lineup had been pared back to only three acts: Men Without Hats, The English Beat and Howard Jones. The likes of Paul Young, Katrina and Modern English were left to their own devices.

It was to be the first time I’d see Men Without Hats. I’ll admit that I only own the Oglio Entertainment Collection release, but I was still looking forward to reveling in the nostalgia of “Safety Dance” and the possibility of hearing “Pop Goes the World.” It wasn’t meant to be.

When Ivan Doroschuk, the vocalist and only original member of the group, took the stage with his band, I was floating somewhere above Nevada. The concept of teleporters, being in two places at once and other sci-fi tropes were racing through my mind.

I had been careful to plan out my day. Maybe too careful. What was it that the poet Robert Burns said? “The best laid schemes o’mice an’ men, Gang aft a-gley.” Which is to say that our best plans tend to be those that end up going astray. The universe was against me.

Wheels down on the runway, a rush to the venue. It’s sticky hot, a good 10 degrees warmer than it was in Los Angeles. The crowd is on its feet dancing and the unmistakable tone of Dave Wakeling, lead singer of The English Beat, serenades the crowd.

I saw Wakeling and his band, of which only Wakeling is an original member (Ranking Roger fronts The Beat in the U.K. with his own collection of touring musicians), in December of 2015 at The State Room. It had been an energetic show featuring hits from Wakeling’s stints with The English Beat and General Public. The crowd responded in kind that night, but it was nothing compared to what I was witnessing this time around. The majority of the Red Butte crowd were on their feet. To stage right was a throng of people dancing. It was the kind of enthusiasm that is typically saved for the night’s headliner.

Unfortunately for me, the next song, “Mirror in the Bathroom,” was the band’s last. A malfunctioning computer had kept me from enjoying almost the entirety of the set. Still, the buzz lingered in the crowd as various members of the band walked among the audience. They were easy to spot in their matching polo shirts.

I made my way down to the front as the dancers vacated their positions next to the stage.

I’ve seen Howard Jones countless times over the years. I’ve interviewed him once and even talked his tour manager into letting me meet him when he played a small show at The Jazz Café in London. All I had to do was say, “I’m from Salt Lake City.” Instant access.

Over the past couple of years, I saw Jones at the Sandy Amphitheater, The Egyptian in Park City, at Red Butte when he opened with O.M.D. for the Barenaked Ladies last year, and the headlining show that happened the night after at The Complex. They’ve all been enjoyable, but the Egyptian show remains the highlight of the lot, as it featured Jones and a keyboard backed by an amateur choir (aka the audience).

For this appearance, Jones had his usual array of keyboards and a backing band consisting of a keyboardist, two drummers and a guitarist.

Jones and Utah have a longstanding understanding of each other. It’s something of a love affair that only requires Jones to appear onstage and the audience to sing along with whatever song catches their fancy.

The plus side of this equation is that communal feeling that you can only get at a live gig. The downside, at least in this case, is that Jones is not rewarded for playing lesser-known tracks. This is evident early in the set when Jones introduces “Equality” from his debut album, Human’s Lib, and the audience responds with disinterest. The crowd reacts slightly more positively to “The Human Touch,” a particularly danceable track from his 2015 release, Engage.

No, this audience wants to take a nostalgia trip, and Jones is willing to oblige, as the set includes numerous hits including “The Prisoner,” “Like to Get to Know You Well,” “New Song,” “You Know I Love You, Don’t You?,” “Hide and Seek,” “No One is to Blame” and “Things Can Only Get Better” with its now-familiar techno reprise.

The performance is solid, packed with reminiscing about Park West and the relationship that Jones has felt with Utah. I’ve heard most of the stories before at some point over the years. I don’t mind hearing them again, and I certainly appreciate the opportunity to sing along to a few classics. Nonetheless, I have to rank the show well behind last year’s appearance at The Complex. For that show, Jones managed to sneak in new and lesser-known tracks alongside the hits. That’s the tradeoff when you’re seeing an artist as part of a festival, even if they are the headliners.

Still, it is hard to be too critical when the audience is clearly pleased with what they’ve been given. I’m still waiting for him to play “Last Supper” or “You Can Say It’s All Over,” but I do still keep coming back for more. Yes, there is something magical about seeing Jones in Utah.