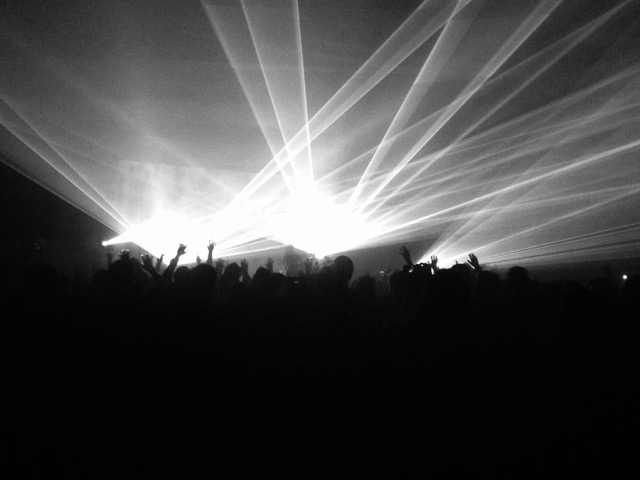 Review: Ratatat @ The Complex 04.06 with Despot

A thick fog like a San Francisco morning hung in the dance hall at The Complex. Goths, punks, club rats, hipsters and a lone man reading under a wall light half-filled the dance floor. Security guards meticulously surveyed from the no-man’s-land of the prison-esque fences dividing the dance floor and bar. Loyal Ratatat fans showed one another their custom-made T-shirts. Anticipation for the show grew as the diverse motley of Salt Lake City subcultures began to blend.
A lackadaisical cheer wafted through the air as Despot took the stage. He talked briefly about being from Queens, then began his set. He rapped about money, cars, sad feelings and then about money again. His beats were loud and a bit more original than his generic lyrics. In each song, he used the same metaphor of something small being so high/big. The upturned bass and his enunciation made it hard to understand anything beyond the first and last word. His performance was reminiscent of ’90s rap as he jumped around the stage. As Despot left, he received the same half-hearted cheer as he was greeted with.
There was a long intermission. The show started late and Despot ran over his time. The small outdoor smoking area became an oasis for bored patrons under 21. They huddled together, occasionally being infiltrated by older concert-goers—some asking for a lighter or attempting to bond over jokes about pussy. A loud, shrill yell screeched its way past the cracked doorway. Cigarettes were hastily thrown to ground as the recently bored made sure they didn’t miss a thing.
Ratatat took the stage and a roaring cheer resonated throughout the Complex. The two men sauntered onstage and took their guitars. Throughout the show, their keyboard, drums and guitar work were exceptional. The guitar riffs were punctuated with laser lights that refracted off the fog. The lights changed from single straight lines to long waves. Each song had its own colors. The large TV screen behind Ratatat displayed repeating images of chickens, shapes and statues. These images were repeated in an eerie, acid trip way—they made no sense and defied reality, yet the mad circus was completely alluring. Bodies moved to the high-powered rhythm of reminiscence as “Loud Pipes” and “Wild Cat” vibrated through their bodies. Ratatat seldom tours, so hearing them live was a real treat. They are also one of the few bands that sound just as good or better than their CD recording. Ratatat played a two-song encore and ended with the instrumental version of the Notorious B.I.G. remix “Party and Bullshit.”
The disjointed crowded lost their unity as the house lights were turned back on. Each small clique clung together as they talked about the show. The mutual feeling of satisfaction and widely broadcasted smiles was the only unifier. The well-worked guitar riffs, crisp sound and alluring beats leaves no doubt why Ratatat is sampled in so many remixes. The only downside is that, after this tour, they won’t be playing for another couple years—except for their annual Coachella appearance…
Take in the psychedelic visuals of Ratatat’s set in Talyn Sherer’s photo gallery!
Photos: