00:00 / 18:49
Spotify Stitcher
RSS Feed
Share
Link
Embed
Revolver Magazine’s Hottest Chicks in Hard Rock Tour made a quick stop in Salt Lake City to demolish The Complex with sonic sound waves of guitar and aphrodisiacal female vocals. Firstly, let me say as hot as the women were, the focus should be on their talent because that is what stood out during the show. Looks are fleeting, but talent is everlasting. 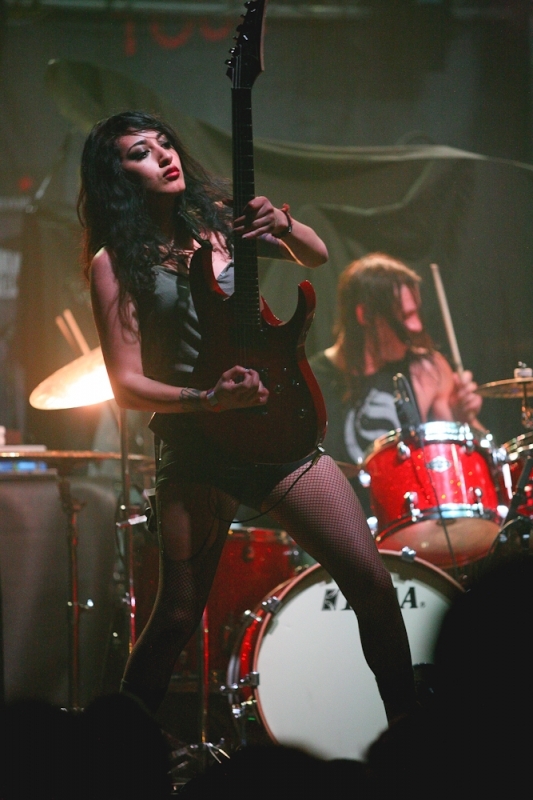 Alexia of Eyes Set to Kill takes her turn at a guitar solo. Photo: Garrett Allen

Revolver Magazine’s Hottest Chicks in Hard Rock Tour made a quick stop in Salt Lake City to demolish The Complex with sonic sound waves of guitar and aphrodisiacal female vocals. Firstly, let me say as hot as the women were, the focus should be on their talent because that is what stood out during the show. Looks are fleeting, but talent is everlasting. At first glance, The Complex seemed like a fire marshal’s nightmare with wall-to-wall sweaty bodies waiting to tear the place apart. Upon closer inspection, everyone had grouped so close to the stage that the entire rear of The Complex had ample room, which is where I cozied in and waited for the show to begin. Taking notice of the crowd, I saw there were shredded jeans, black T-shirts and boots as far as the eye could see; basically, the same dress code as the Utah State Fair.

The first band to grace the stage was Utah’s own female-fronted rock band, Never Before. I was impressed with not only their stage presence, but the lead singer Chandra Marie’s vocals. She had great control over her voice. It would have been great to see a larger set up for Never Before, but with four other bands equipment already onstage, that would have been impossible. I recommend checking out their ReverbNation page, which is loaded with song downloads and a live performance video; support your local rock bands by spreading the word.

The opener for Revolver Magazine’s Hottest Chicks in Hard Rock Tour was the band Cilver. During the set up I was incredibly impressed that Cilver’s guitarist, Leon Lyazidi, [https://twitter.com/LeonLyazidi] made every effort to make sure the sound was perfect, and once the show began, his efforts truly showed through. I was not familiar with this band, but did look them up prior to the show. After looking them up online, I was already a fan of their hard rock, “Joan Jett meets Bush” style of music. During the show, what added to their sound was the performance: keep in mind they were performing on a stage with three other bands’ equipment, but still had the ability to make use of the stage and entertain the audience. During the song “Pain is Like a Drug,” Cilver’s singer, Uliana, created such an amazing atmosphere that I gained new appreciation for this song. Cilver’s single, “In My Head,” was the last song they performed live. The song did not disappoint, especially since right after the song finished, Uliana crowd surfed to the merchandise booth. From what I have read, this has become her signature move during the tour. One thing I really need to mention is the fact that after their performance, both Uliana and Lyazidi were at the merchandise booth signing autographs, answering questions, and shaking their fans’ hands. They were truly grateful, which was refreshing. I grabbed a copy of their CD and had Uliana sign it and highly recommend it to anyone who is a fan of hard rock. Uliana and Lyazidi both commented on what a great crowd Salt Lake was and I was glad to hear they had a warm welcome; like many others, I look forward to their return to this salty desert.

Next on the docket was Eyes Set to Kill. The Rodriguez sisters, Alexia and Anissa, have gone away from their more metalcore beginnings and really turned into a heavy rock band. This was extremely apparent during their song “Infected”. This song was amazing live and really showcased Alexia’s vocals. Alexia was joined by Cilver’s Uliana for a damn cool duet during this song. In this day and age where every phone has a recording device, online video can often be misleading. Sometimes there is a gem among the garbage, but it takes a lot of research. This is why concert reviews are vital. I write this because the videos I saw of this band did not do them justice. I highly suggest the live experience. Regardless of the high definition you may find, Eyes Set to Kill roused the audience into a frenzy and that is an experience you can only have in person. After the show, Alexia and Anissa where answering questions, taking photos, and more than willing to exchange a few words with me. They are really down to earth, gracious individuals. Alexia said that they played Salt Lake a few times before and would be back, but for now they are focusing on finishing up the current tour.

The next band to play was Sick Puppies, who sound like a mixture of Blue October and Three Days Grace. Now, I must first say Sick Puppies have some of the most die hard, excitable fans I have ever seen. They have an entire world-wide fan communication website known as Sick Puppies World Crew. The Revolver woman in this band was Emma Anzai. She is an insanely talented bass player, and when she did backing vocals, really showcased her amazing voice. That can be heard on their track “Under A Very Black Sky,” which they unfortunately did not play live. Sick Puppies’ crowd interaction was amazing: they had everyone clapping, stomping and moshing to the point that someone lost a shoe. I know this because I saw the shoe flying gracefully across the crowd as they played the song “Gunfight.” It was an interesting experience. Sick Puppies had so much energy on stage I became tired just watching them. One word of warning, when they yell out how they want to meet everyone, they mean it. Unfortunately, after their set the insane fans, uncontrollable crowd and pissy crowd controller rushed everyone through the line so fast it was hard to say one word to the band. I did, however, receive a warm welcome from them when I managed to fight my way through the chaotic line. They seemed to be very appreciative people, but I cannot say for sure due to the pushing and utter chaos that was their merchandise booth after their performance. I seriously have seen upset hyenas at the zoo behave better than some of the people in that line.

The piece de resistance for Revolvers Hottest Chicks in Hard Rock Tour was none other than Lacuna Coil. The band sampled some of Salt Lake’s local brews the night prior, according to singer Cristina Scabbia’s Instagram. They were headlining tonight, possibly due to their large following here in Salt Lake City. I have been a long-time Lacuna Coil fan, but had never had the chance to see them live. I was not sure what to expect because, as I wrote earlier, video can, but rarely does, capture the true live experience. Lacuna Coil opened with “Trip the Darkness,” one of my favorite songs. The sound quality and vocals were actually more than what I expected. However, the energy was somewhat subdued. It is hard to explain; there was just an air of either depression or exhaustion among the band. This may be because during a recent interview, Lacuna Coil discussed losing two of their band members. The band did, however, hit every note and chord with amazing accuracy. I kept noticing the lack of energy during this tour when compared to their performance of “Spellbound” in 2009 during Wacken, where there was an air of palpable excitement, according to the attendees. On this tour, “Spellbound” was especially subdued. Overall, I enjoyed the show, but wished there had been more energy and crowd interaction on stage. There is no doubt in my mind that I will see Lacuna Coil live again, though.

I did not bother to try and stick around to see Lacuna Coil after the show because I did not feel like fighting my way through a crowd that did not know what a line was. A line is straight, not an MC Escher acid trip. For Revolver Magazine’s Hottest Chicks in Hard Rock Tour, this was an interesting lineup. Cilver is very much a rock band, while Sick Puppies is more alternative, and Lacuna Coil is borderline metal, but somehow it worked. There was a nice flow to the lineup and I didn’t find myself bored once. It was a good show with only a couple minor irritations that were fixed very quickly by The Complex’s bar. If ever given the opportunity to see these acts live, take it; they were great and with any luck will get even better with time.