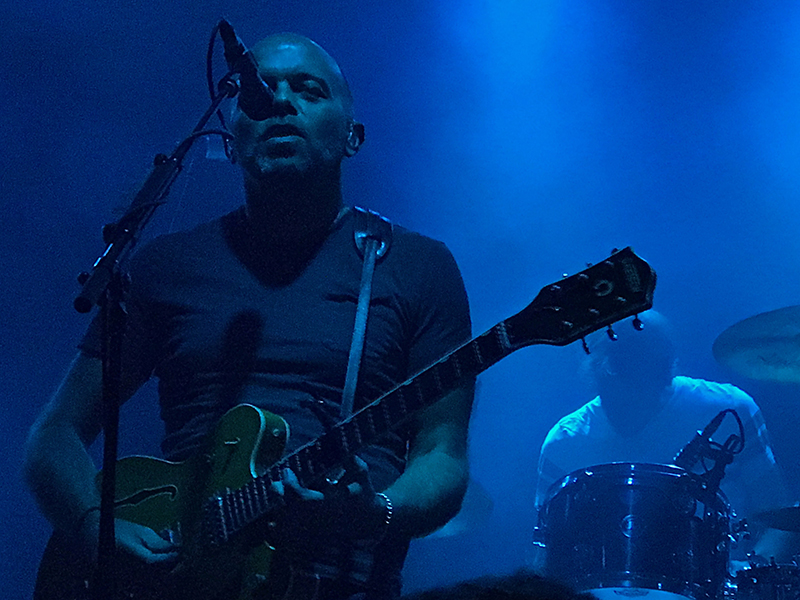 There’s a heavy rain and the weather has turned cold. The Metro Music Hall offers relief for a strange mix of fashions. Soggy punters, a handful of lads, indie fans, post-punk denizens and the odd goth or two crowd the front of the house, waiting impatiently. We’ve gathered for what feels like a surprise party to celebrate Ride, a four-headed Lazarus of shoegaze origin that seduced crowds in the early ’90s before sputtering out in the middle of the decade—the group’s fatal flaw: a brilliant debut album, 1990’s Nowhere, that forced the group to chase their own tail. Certainly 1992’s Going Blank Again was a noble effort, but the following releases saw the band going down a path that I wasn’t interested in following. It was an amicable parting. “Vapour Trail” would remain one of my favorite songs ever written, and the band was free to indulge in their classic rock influences.

I’d occasionally check in on Mark Gardener‘s and Andy Bell‘s various projects, but it wasn’t until 2017’s Weather Diaries, Ride’s first release of new material in some 20 years, that I really started to feel nostalgic.

So, there I was, no longer the schoolboy of 1990, but a road-weary traveler who never thought he’d find himself in a club waiting to hear the likes of “Twisterella” and “Chelsea Girl” live for the first time.

Traditionally, this is the place in a concert review where the opening band is referenced in passing—an obligatory mention to keep the dance moms at bay. Lo Moon, however, are not your traditional opening act. With a sound that feels like the love child of early Talk Talk and the psychedelia of The Church, Lo Moon channel a pop tone that also nods to Glasgow’s Prides, but is uniquely their own. I’m instantly fond of them. Only later would I discover that guitarist Samuel Stewart is the son of Eurhythmics‘ Dave Stewart. This is one of those rare occasions where the openers could have played a bit longer I wouldn’t have become the least bit impatient.

With the stage cleared of Lo Moon’s equipment, Bell, Gardner, Steve Queralt and Laurence Colbert took the stage and launched into “White Sands,” the slow-burning closer to Weather Diaries. It’s instantly clear that even the group’s more atmospheric tracks have considerably more bite in the live setting as the distorted wall of sound comes crashing down around us.

They play another two new tracks, album opener “Lannoy Point” and lead single “Charm Assault,” followed by the classic track “Like a Daydream” from the group’s Play EP and “Unfamiliar” from the Today Forever EP, the group’s only release in 1991 following an extremely busy 1990.

It was around this point when the otherwise brilliant show became complicated by an entangled pair of lovers who decided that it was an appropriate time to make out, film themselves, then watch the video and repeat the process over and over again. I’ve witnessed my share of self-absorbed concert behavior, but this was a new low.

New tracks “Rocket Silver Symphony” and “Cali” became the score to an incredibly bad film that featured cinematography as sloppy as the kisses and had all the eroticism of two dying trout flopping together in a fisherman’s boat. Unimpressed by their performance art, those around the couple asked them to take their two-ring circus elsewhere, prompting the alpha male to puff out his chest and assert his right to be a prat.

Fortunately, the entwined annoyance shifted to stage left as the drums announced Nowhere‘s “Dreams Burn Down.” The rawness of the guitars drowned in the backlash of distortion, pushing the song to a height that the excellent studio version could never match.

“Twisterella,” a coy pop song dressed in jangled guitars from Going Blank Again, goes down like a warm elixir to vanish the lingering resentment for the show’s unwanted guests.

Ride returned to Nowhere for “In a Different Place,” a somewhat unexpected surprise that has me realizing that the band has ignored their third and fourth albums entirely.

“Taste” from the Fall EP is followed by Bell explaining that a sore throat would have him passing vocal duties on the next track to Gardener—and then came the strum of “Vapour Trail.” The swapping of vocal duties doesn’t keep the song from reaching its zenith. A glorious, transcendent moment that I had waited 27 years for.

The set closes out with the gloomy “Drive Blind” from the group’s self-titled debut.

The appreciative shouts of the crowd draw the band back out for “Leave Them All Behind,” the second single from Gone Blank Again before sending us home happy with the distorted pop bliss of “Chelsea Girl.”

I imagine those who came with hopes of hearing “Birdman,” “Black Night Crash,” “I Don’t Know Where It Comes From” or any of the group’s other mid-career releases left feeling a little disappointed. For me, it was the perfect mix of new material and classic tracks from the 1990–1992 period. There’s no fat on this set—just a lean selection of noise pop.