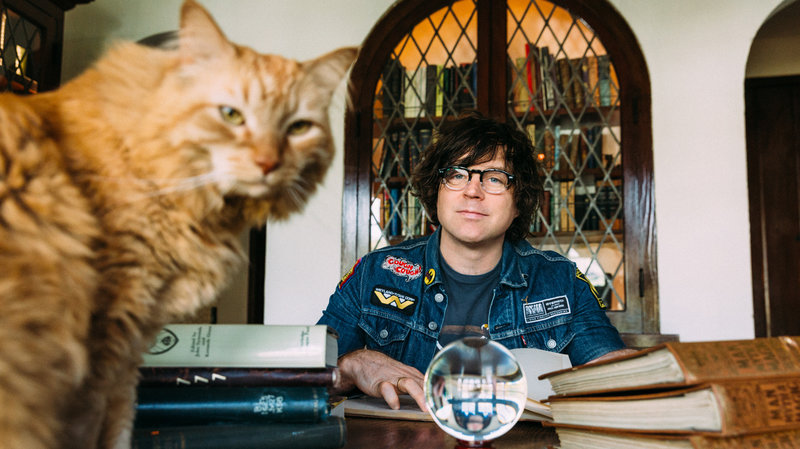 I was ecstatic at the chance to see Ryan Adams on tour in the wake of his new album, Prisoner, knowing what a serious songwriter and musician can throw out onstage. Prisoner, the followup to Adams’ cover album of Taylor Swift’s 1989, can be seen as one of the driving factors, among other life events, that led up to Adams’ current sound. The 16th studio album takes advantage of Adams’ Strat guitar combined with pedals, giving the album a larger electronic sound, hitting higher-end notes, departing from the sound of earlier albums, which were filled with low-end notes that created an alt-country feeling. The new album has a pop-rock element added, which is easy to see from the trajectory of 1989. Entering the Eccles Theater, I was greeted by an open-air foyer full of people as sunlight poured in, washing over the dispersed, melancholic crowd. Tickets in hand, I was eager to see what Adams was offering for his tour-only merchandise. All spread out, the merch included images of bright ’70s cartoon cats and Pax-Am record patches. The recent tour imagery looked to be taken from Adams’ jean jacket or one of the many pinball machines he owns. His goofball side was fully embraced in his merchandise, and only five minutes later, I realized that same concept found itself onstage.

Inside the auditorium, blue light cascaded down on the stage as billowing smoke rose up behind a triptych of stacks of electronics arranged in large sets. A pyramid of old tube televisions, rising 12 feet high, stood directly in the middle of the stage, visually hissing at the crowd. Sandwiched between that and the television tower was a mixture of real and overly fake Fender guitar amplifiers, all aglow with a single red light. More groups of televisions, all turned on, were spread around the stage, along with an adornment of stuffed tigers placed about.

Model and singer Karen Elson—a surprise opener—took the stage with a treble three-piece band of harp, violin and swaying guitar. Diving into “wonder blind,” followed by four other songs from her new album, Double Roses, Elson swept me away with the gentle echo of her vocals, which reminded one of the softer vocals by Sinead O’ Connor. As the set drew out, the vocals picked up right where the violin left off, switching back and forth alongside Elson’s out-of-tune guitar and whaling on up through to their final song, “Why Am I Waiting.”

Once the set was clear of musicians, more smoke was added in the form of burning sage, a further attempt to ritually clear the area of any other entities before the lights dimmed. Adams came on board, along with his new band, opening up the music hall by instantly filling it with “Let It Ride.” It’s a somewhat softer song pulled from the album Cold Roses, except this live version hits harder and louder, replacing the twang of the guitar with the faster tempo and punch of AC/DC that Adams has referenced in the new album.

Moving back to “Magnolia Mountain” from the first disk of Cold Roses, Adams played with the same determination he did in the previous songs, all while every TV simultaneously streamed repeating images of small film clips. The lit-up red amps and energy had pushed all the burned sage into the crowd at this point.

Adams played “To Be Young (is to Be Sad, Is to Be High)” at twice the tempo, turning the song into a borderline post-punk sound.

The Grammy Award–winning “Gimme Something Good” (2014), when played live, helps remind us why Adams has become such a magnificent songwriter (often compared to Dylan) and stage performer. The ability to change the tempo and core feeling of a song from sad to happy with a new band should be just one of many indications of the dedication and love Adams has for writing music.

“Prisoner,” off of the eponymous new album, brought down the tone of the show as all the lights were turned off, except for one dramatic light and a small set of white Christmas lights coiled around a microphone, reminiscent of the lit backdrop of 2007’s Easy Tiger recording session. Adams’ acoustic guitar appeared for the first time during the show like a magnet pulling us back to some of his earlier albums, the lyrics and melody. Drawing from similar techniques, “Prisoner” has a strong link and feeling to “Within Your Reach” by The Replacements. “Peaceful Valley” begins simply enough, sounding close to the original song found on Jacksonville City Nights with the beloved Cardinals. The song kicks off out slowly and calmly, moving through a large part of the lyrics until around the last part of the third chorus, when everything starts to change. The band starts a trance-inducing instrumental sound that swells with reverb and psych, and the song derails into a prolonged, five-minute jam session, reaching into Grateful Dead territory.

“Dear John” brings us back down to earth as the show slows to a crawl. The lyrics, “Two silvers rings / One’s on my finger and the other one’s gone / Went underground with you,” help reaffirm that Adams’ emotion and sad tone is still a part of the artist, evoking the same feeling you get from listening to John Prine‘s  “Angel From Montgomery.”

Adams addresses the audience with song requests while a gentleman in the first few rows repeatedly yells out for “Jacksonville Skyline.” The request could have been a whole lot worse, but Adams responds to the man’s request with an oddball, offhand comment—“When I make, you a special lasagna, you don’t ask for a ham sandwich”—alluding to the fact that this man’s request is for a song by a now-extinct band that Adams was a part of, called Whiskeytown.

“Doomsday,” another song from the new album, starts out strong, giving off the vibe of being a followup single to any number of Bruce Springsteen’s early albums. Less than a minute into the song, with an atomic bomb lit up on the televisions Adams waved his hand in a circular motion over his head, signaling the band to quit playing. “Doomsday” flipped from hard electric rock to a solo acoustic set, adding the signature harmonic riffs found at the beginning of the song heard on the album.

Adams ended the night with “Wonderwall” by Oasis, a cover of the mid-’90s song that helped to keep the shoegaze sounds of Jesus and Mary Chain, Slowdive and many more bands in the genre alive. Adams’ version takes the song and strips out what Oasis had built, adopting it completely as his own. As the song ended, and the band left the stage, Adams flashed a peace sign— his signature, followed by, “Peace, we love you.”