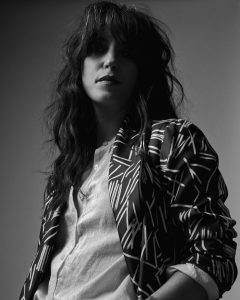 Shame on me. Shame on me for claiming to be a fan of Sharon Van Etten but being utterly clueless as to how much of a rock star she actually is. I am not referring to the type of rock star who lives lavishly while riding whatever bolt of lightning they got lucky enough to catch onto a scene only to leave it, namelessly, shortly thereafter. No, I am talking about the term in the classic sense. You know, someone with charisma, pouring themselves out entirely onto a record or on a stage, moving a crowd of people with their passion and natural sense of style and purpose. Van Etten is very much the latter type of rock star, and I think nearly everyone at Metro on Feb. 19 would be quick to join me in that assessment.

The buzz was high throughout the venue prior to Van Etten taking the stage and it had nothing whatsoever to do with drinks being served. Well, maybe not nothing, but very little. People were talking Van Etten, her albums and impactful songs, and their anticipation was mounting by the minute. There were a lot of eager folks in attendance, including myself. I was lucky enough to find a little gap to camp out in for a good view, but it was fitted almost like a jigsaw puzzle—one had to move with the flow or risk losing their vantage point to someone more in tune with the vibe.

When Van Etten stepped in front of the mic, touring for her month old release, Remind Me Tomorrow, fans cheered, whistled and whooped just long enough to let her know they were happy to see her before becoming completely engulfed by the eclipsing light show and heavy baseline of “Our Love,” from 2014’s Are We There. It was a perfect starting point for the performance—a point that ultimately laid down the tone and pace for the entire set. She seamlessly went from one track to the next for several minutes, diving into material that matched the tempo of the opener like “Comeback Kid,” and “No One’s Easy to Love,” both from the new album. When she picked up a guitar, she paused to address all of us, acknowledging the aforementioned vibe. She liked the energy, it was reciprocal, and the give and take only added to everyone’s overall enjoyment.

Van Etten played a few older tracks in the middle of the set, beginning with “One Day,” from 2010’s Epic. It was a beautiful rendition, one that longtime fans clapped a bit louder for—showing their dedication and appreciation. In addition to the guitar, Van Etten played the piano and even broke out a wind chime. Her varied musical abilities, along with the outstanding light effects and fog machines, made the whole thing a spectacle to behold. She managed to squeeze most of the new album onto the set list, from which the lead single, “Seventeen,” was a crowd favorite for both new and longtime Van Etten followers. It was made obvious by the amount of movement and sing along most people actually partook in.

Another trait that makes Etten less like the superficial rock star I mentioned earlier, is her humble nature. I don’t know her, of course, but she seems to be the type of person who would have a meaningful cup of coffee with anyone and genuinely get something out of it. She most certainly comes across as an everyday sort of woman—not the kind to pat herself on the back for doing something she loves doing. This showed very much as she began to transition into the finale.

Van Etten paused a moment to recognize everyone in her ensemble. Most artists will give kudos to the people playing instruments in the background, which Van Etten did, but few, if any, throw props to the folks running the sound, the lights, the manager and even the person selling merch. It was a very impressive moment of character, however trivial it may have seemed. To me it simply indicates that the songs she writes come from real places and have real meaning.

She gave us a wrenching performance of “Every Time the Sun Comes Up” that was stunning and powerful. I expected this due to her performance up to that point and the honesty the song required of her to begin with, but I was still blown away by her presence and the way she inserted herself at the end of the tunnel we were all watching her through. She was captivating.

There were points during the show in which Van Etten screamed into the microphone with an ache that begged that the messages sent be received, and at other times, she commanded the room quietly, with soothing lullaby vocals backed by sweet harmonies. I have always liked her recordings, and have wanted to see her live for a long time. She played some songs I wasn’t too familiar with at Metro, but I’m pretty sure I’m going to become better friends with most of her catalog starting tomorrow. I love shows like this one. I head in liking an artist, a fan for sure, but leave with a deeper impression, something that sticks for far longer than what was there before could have. I had an experience like that with Sharon Van Etten, which doesn’t happen often, but am always glad when it does. –Billy Swartzfager