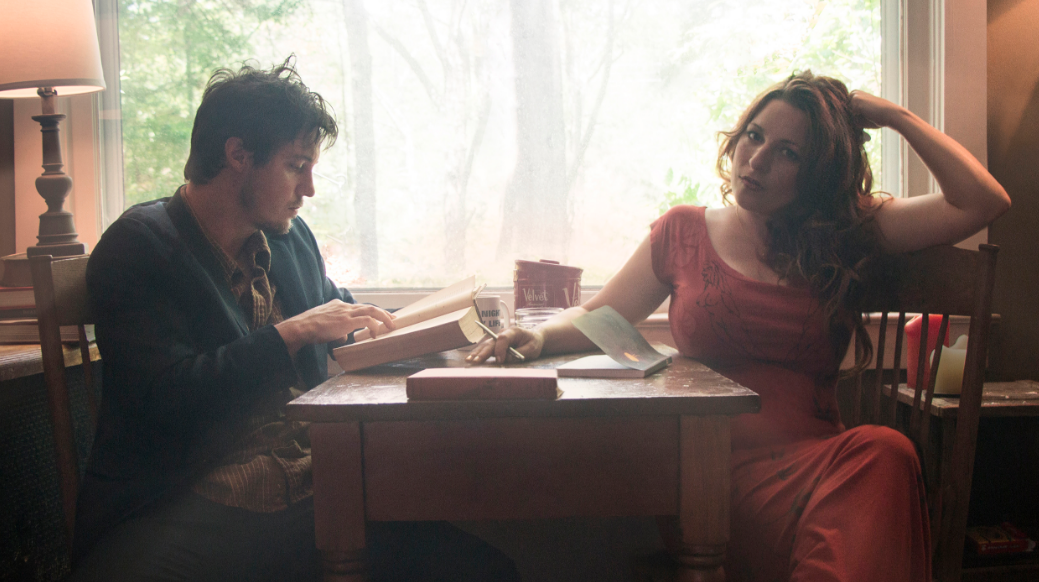 Shovels and Rope. Photo courtesy of Curtis Wayne Millard and All Eyes Media

There are so many things I want to say about my time at An Evening with Shovels & Rope on March 6 at The State Room, but I’m sure I won’t be able to properly convey the complete experience here. I’m not sure I ever do, not really—there are always forgotten aspects. But Shovels & Rope brought so many striking details and one-of-a-kind visuals that I was completely overwhelmed by the impressions left upon me by the end of the night.

There is a certain magnetism surrounding South Carolina–based country blues rock duo Shovels & Rope. Once you’ve discovered a small slice of their Americana Pie, you’re hooked and can easily lose yourself in their harmonies, spectacularly crafted lyrics and overall ability to garner fans that don’t typically listen to country music, the blues, roots rock or anything close. Their charm is overpowering on studio albums. I was mesmerized by them live.

Cary Ann Hearst and Michael Trent are wife-and-husband bandmates and each an equal half of Shovels & Rope. I don’t know them personally, of course, but I’d wager to say that they love each other more than most couples do. Anyone watching them perform can see they are singing and playing for one another, coming together seamlessly in high-vitality moments as well as intimate ones, always on the same page, and always complementary. It was inspiring to witness.

They began their set with “This Ride” and “St. Anne’s Parade” from 2016’s Little Seeds, a good, well-produced album that exhibits all of their propensities for creating music with themes that are accessible and applicable to the everyman while being eye-opening at the same time. The pair took a moment to play a tune the crowd could shake a leg to with “Evil,” from Swimmin’ Time, an album that they turned to a lot before Hearst addressed the attentive audience to say hello and hint at what was to come. We were informed that we would hear old songs and new, never-before-played songs and songs that they didn’t even know. It was apparent that they were in town to have a little fun, and like their contagious chemistry, the fun spread to every patron in the building.

Next, they gave us “Carnival.” I could have left right then and been content. But the set wasn’t finished by half, maybe less. “Carnival” is deep, it touches profoundly, and Hearst handed us a beautiful performance only matched by Trent’s exquisite harmonica play.

Up to this point, I had been enamored so thoroughly with the music that I had sort of missed a bit of the scenery. Shovels & Rope brought a set for their set. I’ve seen a ton of acts put on a good light show, or something on screens behind the stage to help set moods and hammer points of emphasis, but I had never seen a constructed set like the one they played in front of. It was almost like a living room set up in an old barn. There were pallet wood panels in the very back with sporadically placed lamps, all antique-looking throughout. Add to that a couple of old Southern homestead relics, and you get the idea. The lamps were all on timers and worked just like the aforementioned light shows, going on and off, dim and bright along with the sounds, but they were subtle, a perfect addition without taking the focus from the musicians, like that was even possible.

The couple doled out a bunch of tracks from more recent releases before playing something brand new called “Come to Utah,” a fitting entry considering. The song is about a horse named Utah that helps people find their loved ones in a future where Trump’s wall was erected and destroyed in subsequent years. The crowd absolutely loved it—I think they loved all of it, but people always get giddy over hearing the name of where they live sung out loud.

Shovels & Rope went old school after that with “Boxcar,” the first song they ever wrote together, released a decade ago. It seemed as if the song contained their wedding vows, the way they went back and forth on the mic, ultimately sharing it without an inch of space between them. Their give and take was so natural, I feel something so synchronized could never be fully rehearsed or faked.

Their following crescendo was full of harder songs, though still embodying the country-style, simple life the duet embodies so damn well. They were sweaty, the music radiated soul, and their vibes saturated the mob of fans who were so spellbound by both gifted musicians that they hardly sung along, even though they all knew the words.

I don’t know that I have been a part of an audience like that. I’ve watched bands that nobody had ever heard of, I’ve watched bands that played like garbage and lost the crowd, but I can’t recall ever being among spectators so adoring that they simply watched, open-mouthed, bewildered. I wish every show was like this one was. They can’t be, though—that would make it so Shovels & Rope were just like everyone else. And that could never be the case! –Billy Swartzfager