00:00 / 16:39
Spotify Stitcher
RSS Feed
Share
Link
Embed
Outside the Lo-Fi Café there was a line to end all lines. Skinny Puppy and Army of the Universe were about hold a crowd in their hand before they crushed them with pulsating industrial rock

Skinny Puppy @ Lo-Fi Cafe 02.26 with Army of the Universe 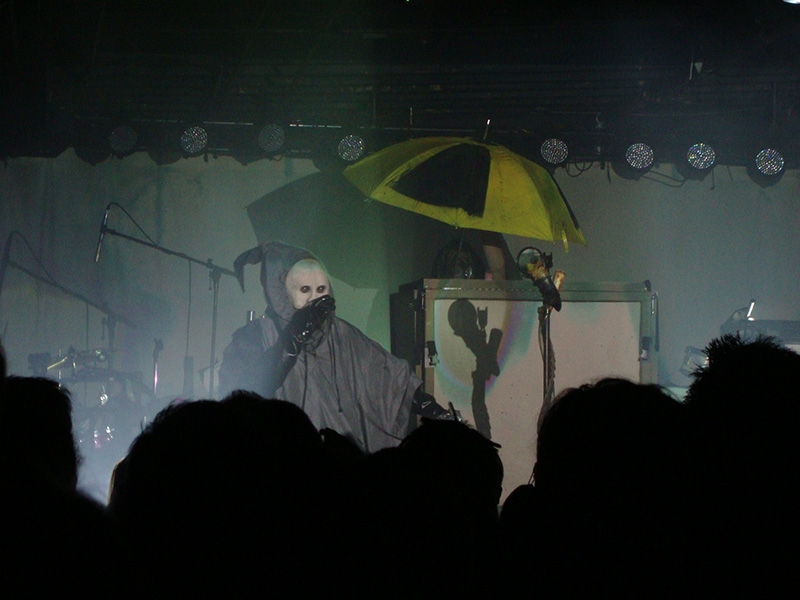 Outside the Lo-Fi Café there was a line to end all lines. Skinny Puppy and Army of the Universe were about hold a crowd in their hand before they crushed them with pulsating industrial rock. Lo-Fi Café use to be Club Vegas, and while outside, I struck up a conversation with a fellow Skinny Puppy fan who gave one of the best comparisons of the old Club Vegas and the new Lo-Fi Café: to paraphrase, “Yeah, the club is much more of a chill rock venue and a lot less of a ‘Hell yeah, let’s drink and see Pantera tonight at the dive bar.’” This is an absolutely solid description of Lo-Fi Café: a decent venue, decent bar, and a good upgrade from what it once was.

Before Army of the Universe took the stage, I took notice of the crowd and let me tell you, regardless of whether your preference is leather, vinyl, PVC or multi-colored cyber-goth, it was all there waiting to warm the blood with raw electronic industrial and beer.

Army of the Universe, took the stage at 9 p.m. and did so with an amazing amount of energy. The amazing thing about this band is their ability to advance their synth sounds while maintaining a classic texture of ’90s-era rock industrial, in the vein of Gravity Kills. For the best example, I would suggest listening to “Until the End” featuring Chibi of the Birthday Massacre. The only downside of seeing Army of the Universe live is the fact that the sound operator had the bass turned up loud enough to drown out the vocals of Lord K, which is unfortunate because K has a true mastery of his voice and is flawlessly able to bridge the gap between singing, screaming and distorted vocals. The parts of his vocals you could hear above the bass were impressive.

Army of the Universe did not disappoint in their set list. “Kill the F* DJ” really showed how this band can interact with the crowd while maintaining complete control of the stage. One of the best songs of the night was “Hollywood Drama.” The stage presence and performance aspect of this song convinced me to mark my calendar next time these gentlemen are in town. A must mention is the song “Love Dead.” I love this song, and its raw electronic elements created an atmosphere that made this song even more enjoyable live than on their EP of the same name. Before Army of the Universe left the stage, they introduced their drummer, on loan from KMFDM, Andy Selway.

A half an hour later, chaotic imagery of war and pollution filled the screens onstage and out from behind, a masked man wearing a hood and carrying an umbrella with a hazard symbol emerged. The crowd went wild, and a band that has been at it since 1982 had just shown that they can still take the stage in an unexpected manner with a captivating force.

Skinny Puppy created electronic industrial rock and have not forgotten their roots. Their new album, Weapon. has the consistent experimental Skinny Puppy sound that mixes in some more advanced electronics. This was apparent when they played the song “illisiT,” a mechanical vortex of cybernetic sound, which let us all know we were living in a criminal age. The message was present from the start of the concert; the lights, the costumes and the music all opened up a door to a world hell-bent on destruction, and Skinny Puppy had something to say about it. The introduction was absolutely amazing, but not nearly as amazing as the rest of their set.

“Worlock” live was truly an experience to be had. Ogre walked onstage wearing animal skins and brandishing a knife. It was not long until that knife ran elegantly across his hand and blood flowed from his knuckles, down his arm, to the stage beneath him. Screaming into the microphone he continued to cut, he continued to bleed, the lights continued glow and all around everyone awestruck stood there knowing it was stage blood and a fake knife, but it was played so well it felt real, even if it wasn’t.

I was more and more impressed as the show went on. After 31 years, Skinny Puppy showed no signs of releasing the throttle and applying the brakes. One thing that has to be mentioned is that in a day and age when so many bands expect you to show up to their shows just because they are there, it was refreshing to see a show that obviously took several months to plan, choreograph and orchestrate. It truly was a twisted avant-garde, science-fiction inspired journey into the mind of someone who cannot and will not hold it all in any longer. It was if The Phantom of the Opera was hurtled into the world of Mad Max, and the only thing left was a decision to try and make sense of this strange situation. You didn’t just get a live show; you got a well-constructed story that held a very strong message about the destruction of the environment, political oppression, and the continued state of war.

Eventually all good things come to an end; Ogre was once again locked into a box that made up part of the stage screen performance. He was slowly wheeled away as people wearing lab coats and gas masks took the stage and started cleaning up. The word “Assimilate” was said again and again, but would they play a song from the very beginning of their career in 2014? Of course they would. Ogre came back onto the stage in a hood which he removed. He no longer was wearing a mask or a costume, it was just him. He mentioned the toxic environment, Fukushima, and living in similar times. Then the stage exploded into light and sound, the stage lit up like a fuzzy television trying to get reception and “Assimilate” was played live for an audience in 2014, some of whom had never heard that song live. It was a joy and greatly appreciated.