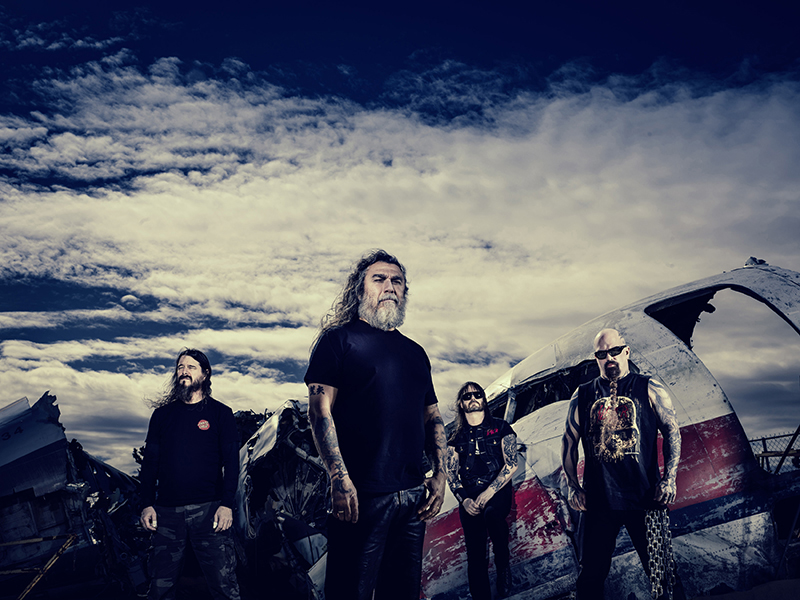 The cynic and elitist mentality in me wants to gripe about every damn thing I found wrong about the headlining show from the thrash stalwarts Slayer. I’ve come to determine that the older and grumpier I get, it’s so much easier to complain or throw negativity around like the ole pigskin. My desire to even go to the show came from wanting to see the mighty Anthrax again. That said, I had a great time by staying positive about something I could go on and on about in a negative way.

Opening for Slayer is never an easy task—many bands have been booed relentlessly. I remember hearing horror stories for when a very young System of a Down opened up for Slayer. This package lineup fit really well together. If it were the early to mid-’80s, this lineup would have that era clamoring for tickets. Death Angel got the thrash rolling. Right out of the opening riffs I figured in where Death Angel’s heads are right now, and it’s not their new tunes. The first song was “The Ultra-Violence” where many would say is an outright classic from the album title of the same name. The song felt flat, and the band didn’t seem to enjoy playing it as much as their new stuff. I’m not super familiar with all of the band’s material, and on record, I don’t like the new stuff. That said, the surprise from Death Angel for me came by way of “Caster of Shame” from their 2013 album, The Dream Calls for Blood. It was played tight—the thrash riffing was the speediest the band sounded. While the crowd wasn’t ready to get into full steam, the cheers and horns were raised in praise.

I have had the pleasure to see Anthrax live, both with John Bush on vocals and with Joey Belladonna on vocals. Both have different sounds, obviously, but both frontmen are truly warriors of metal. I expected to hear a few new songs from For All Kings, which came out this year. Anthrax began their set with the first song from that album, “You Gotta Believe,” and it’s proof positive that Anthrax have not passed their prime. It was the first time the heavily packed house started surging and moving in the largest room at The Complex, the “Rockwell.” All the while, every band member paced the stage grinning from ear to ear with Belladonna constantly engaging the audience to sing a long or give a simple “Hey! Hey! Hey!” Thankfully, Belladonna does not have the moves like Jagger, but he moved around giving every angle of the crowd his attention. The set was roughly eight songs, which is eight songs too few. I wanted more, but hey, they’re an opening act. I can’t complain with what I got, though. I rolled through the pit on the 21-plus side of the venue reverting my age back a decade or so screaming along with the lyrics, new songs and old. For any band live, that is the prime goal, to make your songs far better than they sound on record. I don’t want to go to a show hear the songs played exactly like they do on record. You’ve got to have the volume at 11 and the energy from the band at 110 percent. Anthrax played tight and mighty, their sound was dialed in perfectly in every aspect that needed to be heard—ear-plugged or not you could hear it. Granted, I’m talking up Anthrax a lot here probably because I started listening to them before I started listening to Slayer. Also, in my adventures in music journalism, guitarist Scott Ian was my first in-person interview with a band that wasn’t from Utah. I loved doing the interview. Ian was all class despite mentioning that when the interview started, he had a hell of a hangover. This was over a decade ago—it seems like another lifetime for me. So much changes from age 24 to 35.

After Anthrax, a bangover and bruises already started to form from a bit of mild moshing. It took me like 10–15 minutes to grab a water and head outside to feed my dirty habit, smoking. My mind started going back to the past and to more of those older, fond memories, nostalgia—thinking about the main event, Slayer, which for a ton of people, is exactly that a nostalgia band. When Slayer kicked off their set on a fine fall evening here in Salt Lake City, the crowd was smaller and they opened with “Repentless,” the title track from Slayer’s latest record released last year. And damn did things feel stale and tedious.This was my first time seeing the band without the late Jeff Hanneman, whose legendary position was filled by another legend, Gary Holt—you know, that guy from that one Exodus band.

The beginning of the band’s set, I was standing and watching like many of the fine folks at the gig. I primarily judge a show from the feeling I get and the energy the band puts forth. Kerry King and Gary Holt looked bored. Tom Araya had a grin that looked more like a sarcastic smile. Through the first few songs, his vocals felt soft in volume, but with the crowd’s intensity, the energy did pipe up a bit. Needless to say after a few songs, I got bored. I went outside to smoke and stared up at the partial moon, while I could hear Slayer playing “War Ensemble.” I thought about my bad habit and my prior attempts to quit: “Damn, I really need to quit—I don’t want to not be able to do things I love or just have a hell of a hard time, like going to a concert.” I told myself that if I just stand there, watching the show, I’m going to over-analyze the hell out of things, get grumpy think about how “Slayer should have called it quits when Hanneman died or well before that.” I took a moment thinking about standing there and being that elitist dick bag, but I went with a good friend Chris Porter who still absolutely loves Slayer, and while I was separated from him at this point, I knew I had to step into his shoes and the shoes of the diehards and have some fucking fun. So hell, I jumped back in the pit mostly full of drunkards randomly shoving people, and if you got near the edge of the pit, the person standing there was guaranteed to shove you hard. I fell down a few times, but eh. The pit wasn’t brutal by any means. But it let me revert to my younger self again and have fun, let out aggression and rock out like I was 16, ignoring that inner voice telling me I wish I was at a better show. Then things got fun. I tried to get the pit of drunkards—I was probably only the sober guy in the damn thing—to turn into a circle pit. The dangers of the drunks and angry tough guy “Slayer, brah” dudes in the pit were there, but so were the happy “high-five” drunks. Although, I did managed to get … slapped in the face out of complete randomness, not punched slapped by some drunken glob of sweat.

I don’t think Slayer are going to quit anytime soon, a packed house with a roughly $60 ticket, and shirts from $35 up to over $100 selling fast. My moment of clarity came standing there, waiting for my friend to buy a shirt. I observed some young teens just talking about their awe of the show, especially Slayer—them talking about the songs and me hearing bits of fun or random, weird experiences that they had, compared that to my night. Yeah, my back hurts, and my body is bruised, which I inflicted upon myself so I could have fun during Slayer. Age may be a number, but the higher it gets, the less our bodies bounce back and the more grumpy we get. But viewing the show through my friend’s eyes and what he had to say (he’s 21) and just observing the crowd—which, during “Raining Blood” was at maximum violence—if I came home and wrote some cynical, bitching review about the validity of Slayer now and then and every other piece of bullshit in between, it would really be a shitty review that I wouldn’t want to read.