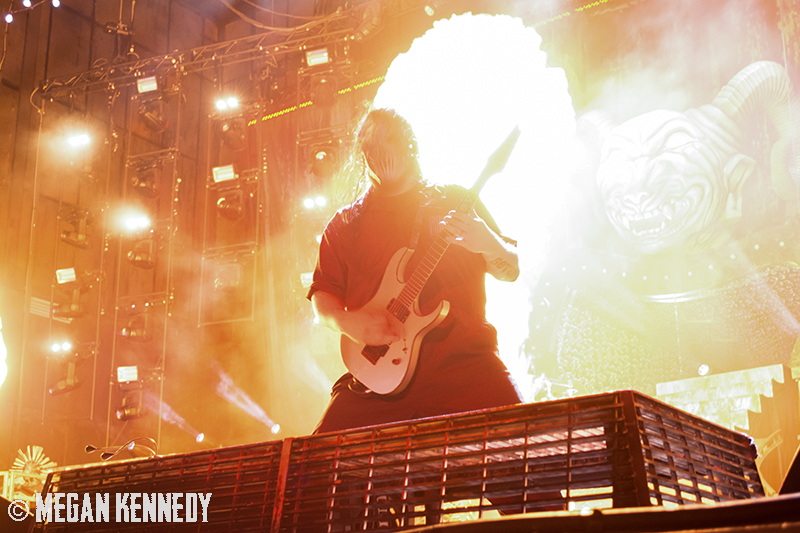 Slipknot @ USANA 08.21 with Lamb of God, Bullet For My Valentine It seems like only yesterday I was a wee lass of 20-something, deep in the throes of the New Wave of American Heavy Metal, stoked on what was supposed to be a massive tour date featuring Slipknot, Lamb of God and Shadows Fall. One of the Slipknot dudes got sick and had to cancel the day of, but their openers decided to carry on and arranged a much, much smaller show at Lo-Fi. My friends and I scrambled to SmithTix to exchange our tickets and spent the entire fucking day standing in the intermittent spring rain to make sure we were among the lucky few to pack into that venue and get our faces melted off. I’ve seen Lamb of God a trillion times since then, and Slipknot once, but it’s cool to be here, a decade later, getting a re-do on the giant stadium-style showcase we missed out on. More than anything, I’m glad Lamb of God has survived the fate of many of their contemporaries—they’re still going strong, still producing quality work, and kicking through obstacles that would crush lesser bands. The same is true of Slipknot, to be fair, but Slipknot never got to me the way Lamb of God did. Regardless, these are two heavyweights who have withstood the storm and earned their keep, and I honestly hadn’t seen USANA Amphitheater so packed in a very long time.

After Bullet for My Valentine’s set, I had just enough time to chug a beer and head to the photo pit before Lamb of God went onstage, and that was the first time I really got a good look at the crowd and realized how fucking packed the place was. The sun was still glowing in the western sky when they finally took the stage, emerging to chants of “Lamb of God!” They opened up with “Walk With Me In Hell” (always a strong choice) and launched into a set that was basically aimed at their longtime fans, touching on albums all the way back to As The Palaces Burn. I couldn’t believe they put “Vigil” on the set list—it’s one of my all-time faves and such an older song that I feel lucky to hear it. Even though they just put out their highly-acclaimed seventh album VII: Sturm und Drang, they only hit up two songs from that newer work, including first single “Still Echoes” and the orgasmic riff-liciousness of “512.” Despite doing this for twenty fucking years, these dudes still have an immense amount of energy. Randy tore around the stage in his typical predator fashion like he hasn’t aged a day. As a fan who has seen them so many times live, the set list was a bit tired, but I imagine that is a shitty consequence of being deep in the scene—for other fans with less frequent show attendance, it was an encompassing and awesome performance.

As I have disclosed before when I covered Mayhem Fest in 2012, I’ve never been a giant Slipknot fan. For whatever reason, I missed the boat on their work, but this is not to say I dislike or disrespect them. On the contrary, seeing their crowd at Mayhem made me realize that Slipknot is a very strong intersectional band that reaches across demographics and subgenres to bring together a comparatively diverse fanbase. I respect the fuck out of any artist that can affect the emotions of so many different types of minds and hearts. More than that, Slipknot just know how to put on a fucking show in the grand tradition of rock and metal showcases like those performed by KISS and Alice Cooper. They use their characters and the visuals they’ve built to create a world to perform in, instead of just rolling off the bus in their cleanest band shirt and letting the light banks do the work. Their set for this tour was as extravagant as it had been at Mayhem, including ramps, pyrotechnics, an enormous demon head, and of course the ever-present rotating and elevating drum sets for the side percussionists. Corey Taylor is very dominating of his stage space, maybe not in the same predatory way that Randy Blythe is, but in more of an MC/ringmaster sort of way. It was crazy to watch members crawl all over the rising drum kits as they spun through the air, and I found myself glad I was not their record label’s insurance monkey. They went through an enormous set list, including hits like “Wait and Bleed,” “Psychosocial” and “People = Shit,” as well as some tracks like “Purity” that haven’t gotten as much play at live events. The fans were absolutely fucking insane for the band from beginning to end. I was watching children as small as 6 running around, screaming the lyrics to every song one after the other. Calling myself a Slipknot fan isn’t fair to actual Slipknot fans, but let’s say I am definitely a fan of the Slipknot live experience. It’s hard not to be impressed by a killer show and thousands of screaming, satisfied music-lovers.