SLUG Mag Soundwaves
Episode #392 – Homephone
00:00 / 17:29
Spotify Stitcher
RSS Feed
Share
Link
Embed
As the exhaustion of walking around town, non-stop eating and non-stop shows began to hit me, I felt mighty fine about spending my time at the same establishment as the night before. 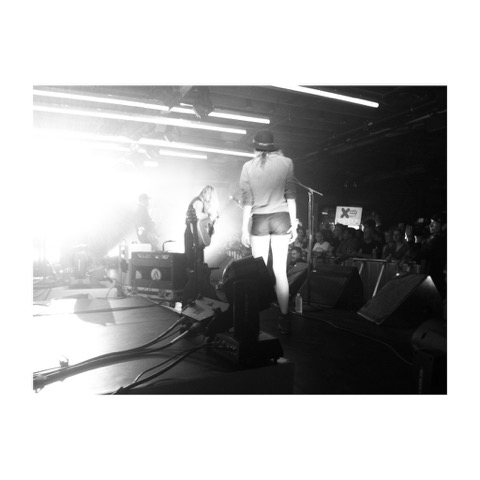 Heartless Bastards played a set that was short, sweet and left the whole crowd wanting more. Photo: Kia McGinnis
As the exhaustion of walking around town, non-stop eating and non-stop shows began to hit me, I felt mighty fine about spending my time at the same establishment as the night before. The Continental Club is in a neighborhood overflowing with people but manages to stay relatively intimate, with a crowd that is just big enough to give the band some feedback and energy without being too rowdy. As it were, I happened across a Salt Lake native who has transplanted to Austin– you can take the girl out of the 801, but it’s damn near impossible to make it anywhere on this earth without finding a little bit of Utah. We nestled in close to the red, velveteen stage and sipped some cold ones as The Stray Birds began to set up their array of gorgeous instruments.
My friend noted, “Stand-up bass is the sexiest,” and I couldn’t agree more. This bluegrass trio leans in around their old-timey microphone in a half moon shape, not in a premeditated way, but because it comes naturally as they create music together. Of course they’ve played these songs before, but it seems that they are tenderly feeling their way through each one, allowing for sweet, undiscovered nuances. The triage of the resonator guitar, vocal harmonies and bass is reverent and travels softly through the crowd, reaching each person at just the right time. As vocalist Maya de Vitry sings, you feel the yearning of being from a small town as she takes you to a place that is simple and slightly somber. One of the essential elements of bluegrass is storytelling, and the Stray Birds have everyone in the room hanging on every word.
I can’t say what sort of fan base Mandolin Orange has, but I’d wager that I may be one of their biggest fans. I’ve been listening to their album so much that I had to begin weaning myself off of it so that it wouldn’t lose its charm. I felt pretty goddamn special to be a few feet away from them as they set up and got right to it. This duo plays folk that is as polished as it is organic, with a gracefulness that speaks for itself. Both members are exceptionally talented at their instruments, but it seems that their fiddle and mandolin are old friends that enjoy nothing more than playing a tune together—and that relationship brings their music intimacy and joy. During a rock concert, it’s easy to tell when the guitarist is shredding hard and the crowd responds accordingly. Mandolinist Andrew Marlin elicits the same sort of reaction as he reaches a peak in his nimble strumming. The duo apologized at one point for the tone of their music by saying, “The good thing about playing sad songs is that you feel good when it’s over.” Indeed, as they closed out the evening with a cover of Bob Dylan’s, “Boots of Spanish Leather,” the audience was left with a satisfaction and pleasantness that comes from truly great music.
At this point, I moved locations and ended up at an exclusive party in a club that seemed very “Turn Down For What,” though I was there awaiting a Western rock band.  I sifted through a crowd of spilled cocktails and 30-year-olds struggling to stand up straight and made it to the front just as Heartless Bastards plugged in for sound check. The long and short of it is that this band rocks—hard. Vocalist and guitarist Erika Wennerstrom has the type of voice you secretly hate her for being blessed with. It could be the love child of Patsy Cline and Joan Jett, equal parts lovely and gravelly. Not to mention that her songwriting and lyrics hit a sweet spot no matter how many times you throw the vinyl on—it’s music that makes you want to have a cigarette and a head full of the past as you drive to the middle of nowhere. She and her bandmates put on my idea of a perfect show in that they nail each song and there are plenty of moments that deserve hootin’ and hollerin’ from the crowd, but they don’t take themselves too seriously. They played a fairly short set, and though it didn’t feel lacking in any way, I found myself wishing they’d play for another hour, even though it was 1 a.m. as they wrapped up.  Cheers to music that leaves you pining for more.
Photos: