SLUG Mag Soundwaves
Episode #392 – Homephone
00:00 / 17:29
Spotify Stitcher
RSS Feed
Share
Link
Embed
The last of my time in Austin called for a hefty dose of local love. Traveling solo is far superior to traveling in a group in many ways, but I didn’t mind coming across the company of some familiar faces to wrap up a week of talking to myself. 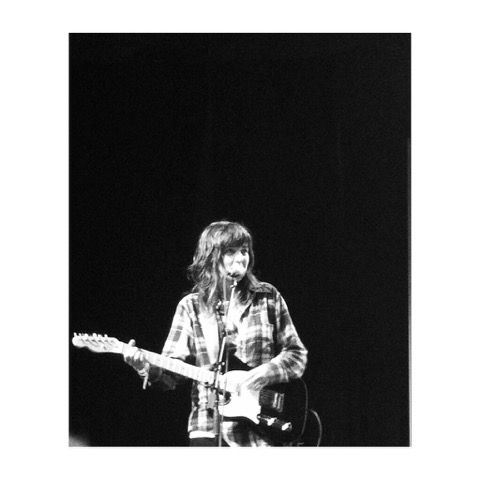 Courtney Barnett’s witty tunes earned her a place in the hearts of many SXSW attendees. Photo: Kia McGinnis
The last of my time in Austin called for a hefty dose of local love. Traveling solo is far superior to traveling in a group in many ways, but I didn’t mind coming across the company of some familiar faces to wrap up a week of talking to myself. I had the pleasure of riding into town with the one and only Bad Brad Wheeler of KRCL in the RV he rented for the week. Though it took us nearly an hour, countless swear words and some swindling to find a place to park the thing, we were able to make it to the Convention Center to check out Flatstock—a gathering of poster art put on by the American Poster Institute. I could feel money falling out of my pocket in helpless heaps as I strolled the rows of music art.  There were stunning pieces in every possible combination of color, aesthetic and band from all over the country, but the prints from Furturtle out of Salt Lake City stood out as especially well-designed and savory. You’ve probably seen Travis Bone’s work around town at Twilight concerts and as the décor at the Park Café—he and his lady Victoria represented our city well and were selling posters left and right—though, let’s be real here—who wouldn’t want to buy a poster from a guy with a beard as grand and fluffy as Bone’s?
It started monsooning outside, raining appropriately big Texas drops, but I was in luck. The next show I wanted to catch was in the same building as Flatstock. I was able to stroll right into the ballroom and get a front and dead center spot for Courtney Barnett’s set. Barnett was a favorite for many at this year’s SXSW, and she should become one of yours. She writes witty, sing-song rock that makes you feel like you’re her best friend and she’s playing especially for you. Some people are good at being onstage because they command your attention, others are so awkward that they magnetize the audience’s attention—Barnett is neither of these things. She’s just a genuine person who is given a well-deserved spotlight and uses it to play her songs and interact with the crowd without pretense or ego. She and her band would rock out whether there were three people in the audience or three thousand. For this set, they played a good mixture of songs from their debut album and some from their upcoming album, Sometimes I Sit And Think And Sometimes I Just Sit. Barnett and her band swing their heads around as they jam, clearly enjoying and savoring the process rather than just running through the motions. “History Eraser,” and “Avant Gardener,” were well-received and familiar to the audience, if you looked around, you saw pleasant smiles on 100 percent of faces. Barnett said at one point, “You all seem like lovely people.” I wouldn’t be surprised if Barnett becomes the most successful act out of SXSW this year—I’m undoubtedly rooting for her, there’s no question she deserves it. I felt like buying her a six-pack, personally wishing her the best, and telling her that she is a lovely person.
For round two of Salt Lake in Austin, I headed downtown to catch Fictionist playing a set in a tiny cowboy bar right on the busiest part of 6th street. I was able to catch the band before the loaded their gear in and we had a chat in the rain while parties raged up and down the block. These are straightforward, nice guys whose music reflects their personality. Though they were given what I would consider a fraction of a stage, they packed in and made use of every inch of it. The venue was packed full and slightly rowdy, perhaps due to the mechanical bull in the adjacent room. Fictionist is a local band that may have escaped you, as they gained critical success and more or less climbed above the 801 scene as they toured and continued to write great, accessible music. Their pop-rock is tight and clean, and these qualities make it readily available for your ears to grab. If solid musicianship is their first achievement in performance, the second is being high-energy and excellent at reading and responding the audience. Singer/guitarist Robbie Connelly was whipping his guitar around like mad and at one point threw it on the ground. Their music reminds me of Yeasayer in that it is electronic and rock in the same breath, making for songs that are endlessly interesting as they use elements from both genres. They had a grip on most everyone in the room as they made their way through the little time they were given on stage and, in fact, had a few people in the front absolutely going wild. I can’t lie, I felt a surge of pride as a band from my town finished up and received praise from a crowd of strangers.
That about did it for my coverage of the festival, as the next day shows got rained out and canceled faster than I could keep up with getting around on foot before catching a flight back to Utah. Let’s hope that Salt Lake continues to crank out killer bands that can gain exposure in situations like SXSW and in turn give our city a glowing reputation. Until next year, Austin, au revoir and thanks for all the above average music and tacos.
Photos: