SLUG Mag Soundwaves
Episode #392 – Homephone
00:00 / 17:29
Spotify Stitcher
RSS Feed
Share
Link
Embed
Being handed a press pass for SXSW made me feel like a 12-year-old in a candy store with an unlimited credit card. Believe me, whatever you’ve heard about Austin being the place to see music is the truth, the whole truth and nothing but the truth. 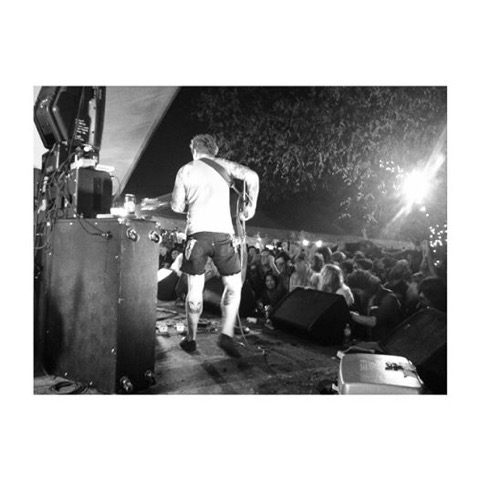 According to Kia McGinnis, SXSW—and Austin in general—is some kind of music Valhalla. Photo: Kia McGinnis
Being handed a press pass for SXSW made me feel like a 12-year-old in a candy store with an unlimited credit card. Believe me, whatever you’ve heard about Austin being the place to see music is the truth, the whole truth and nothing but the truth. If you’re a musician, you should try and build up your good karma so you can die and go to heaven here. This is a place where you can catch jazz and blues legends on a daily basis like it ain’t no thang, and where you can stumble into any bar on any given night and see a band that makes you wonder why you hadn’t heard of them before. This town knows it’s got it going on, but extends an open invite to newbies– even the 50,000 or so of us invading for the festival.
I kicked off my week of music nirvana with a Will Ferrell sighting and some mighty damn fine tacos. Both were over all too soon but left me satisfied and infatuated, and I walked with an embarrassingly ridiculous grin through the warm, slightly wet air to my venue for the day, The Hotel Vegas. The lineup, presented by Strange Brew, included an eclectic group of bands from varying genres. I caught the tail end of Cymbals Eat Guitars and regretted not having gotten there earlier, as their finale was quite stirring. Next up was The OBGM’s (Ohh Baby Gimme More) out of Toronto. Self-described as a “thrash rocking, ass shakin’ party band,” they certainly didn’t disappoint. For being something as a strange as hardcore/soul fusion, their music presented itself charismatically and they got people moving, even if it meant scanning the crowd and pointing at those who weren’t participating. They followed a song called “Loving You All The Time” with one called “Beating Up Children” and somehow made it seem like the most natural transition in the world. Toward the end, they sent one shirtless band member into the relatively small crowd with a cowbell, which was a bold yet intimate choice that succeeded in getting people to respond to the music.
Slothrust from Ba Da Bing Records followed with an entirely different sort of set. Lead singer and guitarist Leah Wellbaum seems like the kind of chick you could eat a slice of pizza and have a real-ass talk about life with. Her vocals and lyrics are striking in that each line sounds like a statement being made directly to someone who did her wrong, but with enough subtlety to make the whole experience alluring rather than aggressive. Her drummer and bassist create heavy, detailed backgrounds that allow the spotlight to be on Wellbaum while still being present enough to draw attention. Slothrust’s music is the type that should be heard, as the words and composition offer something visceral and memorable.
When a threesome of 12-year-olds got on stage, the general vibe of the crowd was confusion. However, Unlocking the Truth quickly and effortlessly demanded respect as they layed down an intricate, absolutely engaging metal set. People literally had their jaws hanging open and their hands in the air while these tweens shredded and shredded hard. Singer Malcolm Brickhouse has a rare voice that is suited for metal, in that it is pleasing harmonically to the ear while still having the raspy texture generally associated with hardcore vocals. The bassist and drummer are tight and flawlessly in sync with one another, while at the same time showing off their individual talents—rightfully so, because it’s not unfair at all to call them prodigies.
As the venue started to get more hoppin’, Austin natives Whiskey Shivers took the stage and kept the crowd at a high standard for energy. A five-piece band, these gentlemen employ an array of instruments—washboard, stand-up bass, banjo, guitar and fiddle. It doesn’t hurt that they’re all handsome, but they have a way with the crowd that makes it difficult to not clap along and put your hips into it a bit—even after they told a bad joke that involved pube hairs. One of their songs was written about a cat, though it had the feel of a good ol’ fashioned country track about pining for a lady. Using sing along–style harmonies and swinging riffs, they swing through their short set, making way for the headliner of the evening.
By now if you haven’t heard of Thee Oh Sees, it’s about time you throw them in your music library. The group is a funnel for John Dwyer’s creativity and, though it has had somewhat of a revolving door as far as members, has nonetheless remained a pinnacle for psych and garage rock. From where I stood, I could see Dwyer’s calf tattoos bouncing up and down in the red and orange light; a line of Jameson on the rocks was at his ready behind the amps. Historically, Dwyer is known to get rowdy, and this was no exception. Crowd surfers beamed as they hopped onstage, some of them bowing at the band and thanking them before taking the plunge. By the end, nearly everyone was swimming in a pool drenched in beer or sweat or a disgusting yet appropriately sweet combination of both. The front row probably all suffered organ damage from being slammed against the stage, but their faces elicited nothing but blissed out concert joy. Using throbbing guitar and drums paired with dreamy, higher pitched vocals and use of reverb and effects, Thee Oh Sees have putting on a legendary set dialed in. It could not have been a more ideal show to wrap up the first night of what is sure to be a kick-ass, jealousy-inducing week.
Photos: