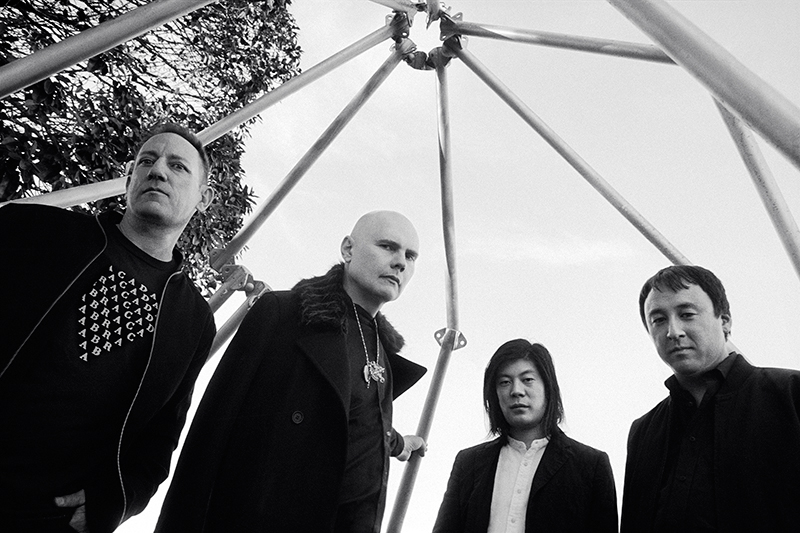 A giant red curtain parts, and Billy Corgan walks to the front of the stage strumming a black acoustic guitar with a white-star inlay—“Disarm me with a smile.” When it comes to my sense of nostalgia, there are only a handful of songs that are specifically tied to one memory: Morrissey’s “Everyday is Like Sunday” takes me back to a rundown hotel in New York in 1991. “Inside of me and such a part of you,” Corgan sings as I remember how U2’s “With or Without You” is tethered to a moment in 1993 where I was sitting in my car with my girlfriend as the rain came down. “Ooh, the years burn / Ooh, the years burn.”  “Disarm” by Smashing Pumpkins sends me back to a hotel room in 1994.  “I used to be a little boy / So old in my shoes.”  I’m on a high-school-drama-club getaway of some sort. Graduation is looming—the world outside is coming ready or not. I’m also suffering through an unrequited crush on a classmate. So, she’s tangled up in the memory, too. “And what I choose is my choice/What’s a boy supposed to do?”

I’d spent the day watching Stranger Things, a love note to my childhood that resonates a bit too much. I’m feeling distant, distracted.

I guess we’re doing this.  “I send this smile over to you.”

The last time I saw the Smashing Pumpkins, there were a hundred or so fans pounding on the glass storefront windows of Tom Tom Music and another hundred or so who were fortunate enough to make it inside. Corgan, who has just acknowledged those outside, is now holding out his hands, waving them wildly. The headline “Dozens of Fans Injured, Store Destroyed During Smashing Pumpkins Appearance” is dangerously close to being written.  The band was peddling Machina/The Machines of God, the last album to feature James Iha and the recently returned Jimmy Chamberlin. Hole’s Melissa Auf der Maur picked up the bass duties that D’arcy Wretzky has recently abandoned.  It wasn’t the classic lineup, but it felt close enough. There was still vigor left in the band.

There is a lot that could be said about the decision to put together a nostalgia tour that doesn’t include Wretzky. For the purpose of this review, I’m not going to offer an opinion or dwell upon the subject. Although, I would have loved to have heard “Daydream,” a fan-favorite song sung by Wretzky from the group’s debut album, Gish. The night feels incomplete without it.

In the early to mid-’90s Smashing Pumpkins were a bridge that connected the classic sounds of ‘80s alternative radio and the post-Nirvana breakthrough that would define what alternative radio would become. For some, Smashing Pumpkins were the strangest band they listened to. For others, like myself, Smashing Pumpkins were about as close to the mainstream as they were willing to go.  A quick look around the arena suggests that either the spooky kids grew up to be the very people they rebelled against in their youth, or maybe the more eccentric members of the band’s original audience jumped off the bandwagon and even the presence of James Iha on guitar wasn’t going to bring them back into the fold.  Fortunately, I wasn’t there for the audience. I came to hear the band.

What followed was a strange evening filled with its share of highlights and derailments. It was the Smashing Pumpkins show that Corgan had always dreamed of putting on. There were costume changes galore; curious covers and a massive stage show that included a variety of archival clips that edited out former band members; a bit of pre-code Hollywood-influenced burlesque; and a whole lot of Corgan ranging from childhood photos, staged scenes and animated sequences. I was fully invested, but that devotion was somewhat fleeting. I expected to be taken to somewhere old with a new perspective. Once “Disarm” ended, that magical, way-back machine stopped working. I was trapped in the present.  I think that Corgan was trying the channel a vaudevillian freak-show but somehow, it became a big top circus act instead. There was no sense of reckless danger in any of it. Corgan is a fantastic musician, but he isn’t the most charismatic showman. The running order of the 30-song set was a little strange as well. It started off strong with “Disarm,” Rocket,” “Siva” and “Rhinoceros.” This was followed by a straightforward cover of David Bowie’s “Space Oddity.” The first act of the show ends with “Drown” from the Singles: Original Motion Picture Soundtrack.

We’re given an interlude of sorts that is more or less Corgan ranting like a snake oil salesman in a prerecorded video that leads into “Zero.” The video segment didn’t completely suck the air out of the building, but it did slow the general momentum that the performance had built to that point. This section of the set, which also includes “The Everlasting Gaze,” “Stand Inside Your Love,” “Thirty-Three,” “Eye” and “Soma,” isn’t quite as good as the opening stretch, but it still entertains.  Then the wheels come off as we’re subjected to a pre-recorded video of Mark McGrath doing his best, golly-gee vaudeville introduction to “Blew Away,” a track sung by Iha. It’s not a particularly interesting song. This is followed by “For Martha” and “To Sheila.” All the energy has now been sucked out of the arena.  I’m happy to hear “Mayonaise,” but “Porcelina of the Vast Oceans” doesn’t exactly set the night sky on fire. Things improve with the group’s strong cover of Fleetwood Mac’s “Landslide” and a rousing performance of “Tonight, Tonight.”  A cover of Led Zeppelin’s “Stairway to Heaven” rears its ugly head. It’s not poorly played, but Corgan isn’t Robert Plant any more than he is David Bowie. The sense of drama, which the song desperately needs, is missing.  “Cherub Rock” closes out this section of the performance.

More pre-recorded Mark McGrath nonsense. He drones on and on and on.  As a reward for our patience, we’re given “1979,” “Ava Adore” and “Try, Try, Try.”  There’s a slight stumble with “The Beginning is the End is the Beginning” and “Hummer,” but the band finishes strong with “Today” and “Bullet with Butterfly Wings.” As the band exits the stage, the audience starts heading for the parking lot. The band returns for an encore that consists of “Solara” (with a drum solo) and a cover of “Baby Mine” that feels incredibly anticlimactic.

I can’t say that I’m disappointed—there were too many highlights for that. I could have done without the pre-recorded sermons from Corgan and McGrath and the Zeppelin cover, but there’s no contract that says that Corgan or any other artist needs to cater to my individual taste. I’m glad I went, but I’m not so sure that I’m in a rush to see them again.