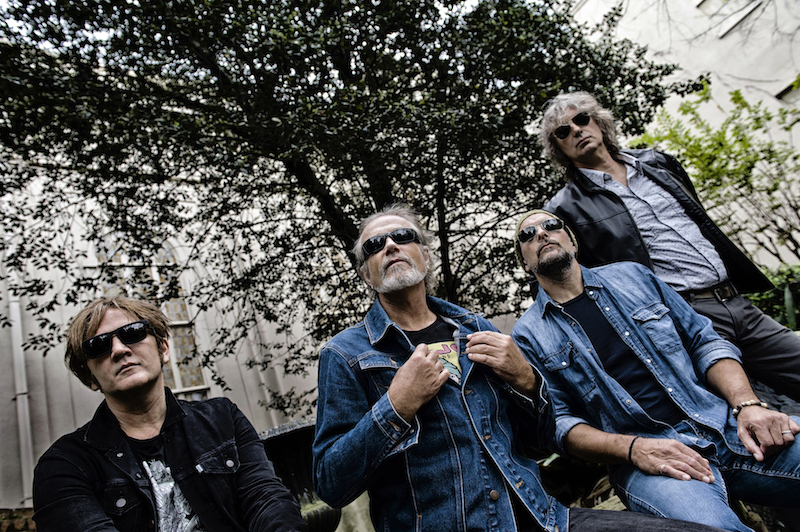 Courtesy of The Church

Somewhere Out in the Dark: The Psychedelic Furs with The Church @ The Complex, 7.29

One of the first shows I ever attended was The Psychedelic Furs at Club DV8 in support of their 1991 album, World Outside. The Furs would split soon after with singer Richard Butler starting Love Spit Love with guitarist Richard Fortus, drummer Frank Ferrer (both now play for Guns N’ Roses) and eventually bassist Tim Butler, Richard’s brother and Furs bandmate. Love Spit Love spawned two albums, a hit single in “Am I Wrong” and a pair of fantastic tours before essentially folding into a Psychedelic Furs reunion with John Ashton returning to guitar duty.

I never did get to see the Furs in this incarnation by the time I caught up with the band in Park City for a tiny gig during the Sundance Film Festival and, if memory serves me correctly, Ferrer had departed. That night, I sat down for a fairly lengthy conversation with Ashton. The one thing I took from our conversation was his disillusionment with any material that the group had recorded after 1982’s Forever Now.

The writing was on the wall—only, I didn’t see it. By the time the Furs returned to Salt Lake City, Ashton had been replaced. I would see the band numerous times over the next few years, with a lineup consisting primarily of the Butler brothers, drummer Paul Garisto, keyboardist Amanda Kramer (Information Society), saxophonist Mars Williams (The Waitresses, Bill Laswell) and Rich Good (The Pleased) on guitars.

Ashton was gone, but his mindset regarding the later material seemed to have stuck as the set lists over the next eight or so years consisted of material primarily pulled from the first three albums and the occasional single from 1984’s Mirror Moves and 1987’s Midnight to Midnight.

I love The Furs, but they hadn’t released new material since the 2004 single “Alive (For Once In My Lifetime)” and had set lists that were dominated by the same material—so, going into Saturday night’s show at The Complex, it was the opening act, The Church, that I was really looking forward to seeing.

The Furs made regular stops in Utah, but The Church, a group that has consistently put out fascinating new material every couple of years, hadn’t been here for who knows how long. Their latest release, 2014’s Further/Deeper, was the first release with guitarist Ian Haug (Powderfinger) as ongoing disagreements between the band and co-founding guitarist Marty Willson-Piper came to a head, leading to Willson-Piper relocating to Sweden and refusing to respond to bassist/vocalist Steve Kilbey’s e-mails.

Further/Deeper is a strong release. It lacks the occasional flourish that Willson-Piper often provided, but it certainly wasn’t a disappointment. So as Kilbey, Haug, co-founding guitarist Peter Koppes and longtime drummer Tim Powles took to the stage, I was expecting the sort of transcendent set that the band had offered up the handful of times I had the opportunity to see them in the past.

Reaching back to 1985, Kilbey and company opened with “Tantalized” before moving on to Gold Afternoon Fix’s “Metropolis.” The mix felt a bit muddy and the performance a little too loose, but Further/Deeper’s “Toy Head” put the band back on course.

As the opening notes of “Reptile”—a fan favorite from the breakthrough album Starfish—played, the audience screamed with delight, but there was something missing. Haug is a solid, perhaps even great guitarist, but he isn’t Willson-Piper. I appreciate the fact that the band was willing to let Haug lend his style to the songs rather than demanding he play the notes exactly as Willson-Piper had, but there was no sense of swagger or danger in his playing.

Anyone who saw Willson-Piper’s solo set at the Zephyr Club years ago witnessed the fiery passion that bubbled beneath the surface as he screamed from the stage at an extremely loud and inattentive woman who apparently thought the crowd had come to listen to her drown out the music with her drunken and completely inane conversation (it was a frequent and unfortunate occurrence at the Zephyr).

“Reptile” lacked bite. “Hotel Womb” wasn’t majestic. “Under the Milky Way” felt lifeless. “Sealine” approached the beautiful chaos of the studio recording, but never quite got it right. “Laurel Canyon” and the set-closing track, “Miami,” both from Further/Deeper, felt solid right up to the point where Powles decided to start dismantling his drum kit, prompting the stage crew to start tearing down the equipment mid-song. It was the second strangest ending to a set I have ever witnessed (the most bizarre being when Jim Reid stormed off the stage at the end of a Jesus and Mary Chain gig while his brother, William Reid, incoherently ranted in the microphone about his sex life).

Maybe it was the confines of being an opening act, but The Church, the greatest Australian band of their generation, came across as disinterested. Maybe it was just one of those nights.

Then came the storm as the Furs took to the stage and ripped through “India” and “Fall” from their self-titled debut. “President Gas,” the sharply appropriate political tirade from Forever Now, came on with Richard’s arm extended as both a mockery of the Nazi salute and a pointed reminder that all that glitters isn’t gold

Whereas The Church had essentially remained stationary and apart, the Furs shadow boxed while roaming the stage with an infectious energy that had the crowd wound into every note. “Love My Way” strolled into “Like a Stranger” and then onto “Mr. Jones.” “The Ghost in You” offered a respite before “Little Miss World,” a new track that the band has been taunting audiences with for the past couple of years.

Then came “All of the Law,” a deep cut from Midnight to Midnight followed by “Angels Don’t Cry.”

It was here that the band took an even more unexpected step by launching into “House,” a late-period single from 1989’s under-appreciated Book of Days. It was also here, as Richard sang, “Shame will shake this house,” that a fight broke out at the front of the audience. A particularly aggressive fan had bodied her way to the front. Tempers boiled over, hair was pulled and punches landed. Security converged and peace was eventually restored. The band, somewhat bewildered by what played out before them, never missed a beat. At the end of the song, Richard paused to make sure everyone was okay before the band closed out their set with hits “Heaven” and “Heartbreak Beat,” sandwiching Forever Now’s “Danger” in between.

The encore kicked off with Talk Talk Talk’s “Into You Like a Train” before unexpectedly giving way to World Outside’s “Until She Comes.

For the night’s closing number, the almost-required “Pretty in Pink,” a special guest, The Killers’ drummer Ronnie Vannucci Jr., walked across the stage, strapped on a guitar and helped bring down the house.

I’m somewhat ashamed to admit that I might have skipped the gig if The Church hadn’t been on the bill—a mistake that I gladly did not make. The Furs are as sharp as I’ve ever seen them. More importantly, they appear to be fully invested and enjoying playing together. After a decade with the band, Good has become a magnetic showman with matinee idol looks and no longer exists within Ashton’s long shadow. I can only hope that Richard seizes the moment, harnesses the raw energy and takes the band into the studio.

As for The Church, I still believe. I sorely miss Willson-Piper, but I’m not about to dismiss them. The possibility of greatness is still there.