I remember seeing her frail body bouncing on the floor in front of green flashing lights. Being shocked again, I asked myself, “Who’s brave enough to close their set with a cover of the rowdiest punk song?” St. Vincent was—she does what she wants. 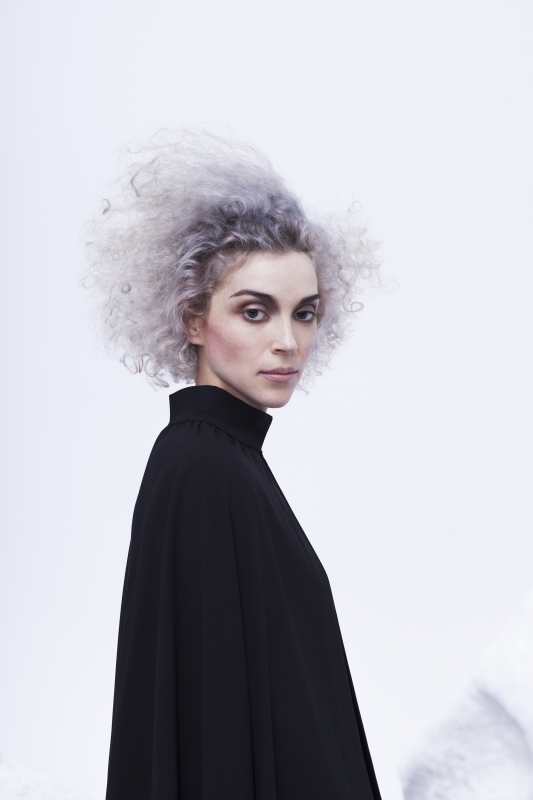 “(She) doesn’t want to be a cheerleader, anymore.” St. Vincent’s Annie Clark is a methodical diva who gives power to the female conscience without any word of feminism. Photo: Renata Raksha

I had recently developed distaste for St. Vincent’s new look and sound, but I knew her show would be theatrical. I knew I couldn’t miss it. I just didn’t know it would be an event that would add to my faith in modern music and musicians.

This show started off in rare form, and I loved it. The Depot was nearly full as Noveller, a solo artist from Brooklyn, took the stage as the night’s only opener. She was alone with her electric guitar, and a few control pads. The feeling was cold, almost Icelandic, and immediately conjured up thoughts of Sigur Ros. Noveller triggered some pre-recorded synth samples with her foot, and then looped live samples she recorded on stage. A few older folks next to me mentioned, “It reminds me of Close Encounters (Of The Third Kind).” There was a thematic feeling suited to sci-fi, visceral experiences. I talked to a few others at the show who also felt the music would be perfect for eerie movie scenes.

At the merchandise booth Noveller told me she attended film school and had no formal training on the guitar. She softly laughed when hearing about the movie comparisons. On stage her presence created a very intimate setting. She would cling to her guitar, and tilt her head back as she played different chords. It was a euphoric experience. Of all her strange moves, pulling out a violin bow to play guitar was the most impressive. When I listened to her play I felt like I was in space, alone, and I could feel the music travel through the chambers of my body. It made sense that an artist as unique as St. Vincent would have something as special as Noveller to open the show.

St. Vincent’s set was by far the most impressive live performance I’ve seen to date. There was never a dull moment. St. Vincent—Annie Clark—is also a babe. By the end of the night I was asking myself, is she Madonna or is she heavy metal? After seeing her perform I believe she could be any type of musician she wants to be. But she made one thing for certain throughout her performance—“(She) doesn’t want to be a cheerleader, anymore.” “Cheerleader” is from her third album Strange Mercy, and she sang it with such force that it echoes in my head as the clearest song of the night. Clark has mentioned her aggression in interviews before, but it literally shocked me to see it in person. As she wailed on her guitar and thrashed her head, I asked myself, is she scared to play this kind of music? And then it hit me, she’s tired of people thinking she’s too dainty to play some of today’s most aggressive music that’s not in any specific genre. You can’t label her sound and that’s exactly how she wants it. Her new album is titled Digital Witness, which is a statement in itself.

To begin the show she and her band mates walked onto an all black stage, and stood still. Through the darkness came a deep computerized voice asking the audience to avoid digitally capturing the show, so as to enhance the experience. Then the funky bounce of “Rattlesnake,” from the new album, began pumping through the speakers. Colored lights began flashing, and Clark stood still behind the microphone with her head tilted, looking like a doll. She then fired off karate chops with a smile before jumping into the first verse.

Next, she moved backwards, in her duck walk fashion, as someone placed a guitar around her neck. It was time for the guitar solo of “Rattlesnake.” If you look at any St. Vincent show review you will most likely see the words, “St. Vincent shreds on guitar.” It’s absolutely true. Out of every calculated move, every doll-like impression, her guitar solos were the true highlight of the show. It’s how she brings her industrial-funk to life; She can play the guitar like Mozart plays the piano. As her fingers danced up and down the strings her quirkiness faded away.

Out of her 23 song setlist, there were two unforgettable moments. These two experiences displayed the polar opposite personalities Clark is capable of—the Madonna and the metal. With her new shoulder length, platinum blonde, frizzy hair she recalls iconic beauty. As “I Prefer Your Love” began, the lights illuminated Clark sitting on a prop with her legs crossed, towards the back of the stage. As Clark sat there she looked like a modern day version of Marilyn Monroe, ready to sing “Happy Birthday Mr. President.” But as she got up, and began moving slowly or even laying down as she sang, her presence channeled Madonna. She’s a methodical diva who gives power to the female conscience without any word of feminism.

The second experience was her last song before she graced us with a three-song encore, including a solo performance of “Strange Mercy.” It was her gutter-punk anthem, “Krokodil.” Clark was a maniac during this song. She’s been known to really let go when performing it. Toward the song’s end, she dropped the microphone so she could literally shake all over the ground, being so electrified by the music. I remember seeing her frail body bouncing on the floor in front of green, flashing lights. I was shocked again, but fascinated with this woman who defies logic and classifications. She’s creating quite the legacy for herself, and I’m just glad I got to see her when I did.

As I drove home that night, I considered the possibility – maybe one day I’ll brag to my kids about having seen St. Vincent live at The Depot.