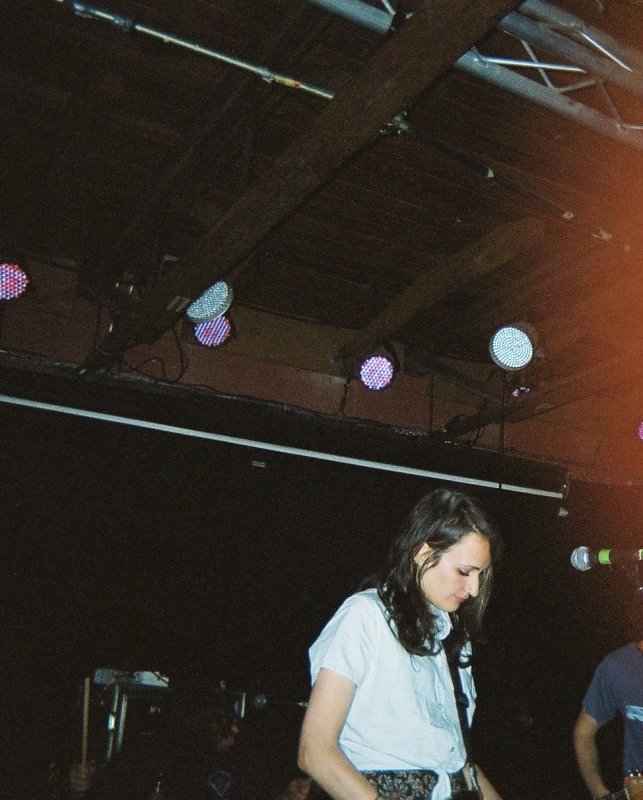 As a ’90s kid, all I ever really wanted was to see my god-like indie rock heroes—Jeff Mangum and Stephen Malkmus—play their alt anthems and now, within a week of each other, I saw ‘em both live. While Neutral Milk Hotel’s Mangum was well-aged, bushy-bearded and graceful, let me hit you with some cold, hard SLUG truth: Stephen Malkmus looks like the lovechild that Peter Murphy and Aaron Carter spawned after a heady night of blazin’, snackin’ and talkin’ sports. Goofiness aside, The Jicks and openers Speedy Ortiz entertained a packed crowd of seasoned slackers and young fans alike at Urban Lounge last Thursday night.

I brought my slacker attitude, and slacker friends in tow, to Urban early to catch Northampton, Mass.’s Speedy Ortiz open the show. Since playing the actually-independent punk circuit for years, Speedy Ortiz has put out a stellar full-length and been pulled to the top of the punk pile by the powers that be. They’ve met minor fame with the same concern as before: “Where’s the best pizza in town?” And though they’ve toured with Thurston Moore, The Breeders and now Stephen Malkmus, and been compared to almost anybody from the ’90s with a guitar, Speedy Ortiz plays indie-noise-punk for right now, right now. (Full disclosure: Singer/Guitarist Sadie Dupuis once fronted an all-female Pavement cover band called Babement, so yeah, don’t discount the ’90s label entirely).

After milling about and catching up with the young-ish band (they’ve played here before and befriended some Salt Lake locals, they prefer The Pie or Pie Hole, they banter about Gilgal Gardens), they get on stage and proceed with a modest and casual set. Beginning with two tracks off of their newest release, Real Hair, “Everything’s Bigger” and “American Horror,” the band slunk into a comfortable rapport with the audience. Minus a few aging Pavement fanboys, the crowd was respectful and attentive. Dupuis led the band into tracks from earlier singles, Sports EP and their Pitchfork BNM’d 2013 record Major Arcana. Dupuis’s banter about Google’s latest Pokémon-themed April Fool’s joke fell flat but the group continued, mixing more contemplative, down-tempo tracks like “Curling” and “No Below” with stop-start Pavementy-grunge ones like “Taylor Swift,” “Tiger Tank” and “Plough.” Judging by the reverence of the Urban crowd, Speedy Ortiz pleased their fans and managed to subdue Pavement-fanboys.

After an anticipatory waiting time, Stephen and The Jicks ambled up to the stage. While the guy behind me was soberly shouting for the band to “HURRY THE FUCK UP ALREADY,” (I could only imagine the boring-ass mid-life he’s rushing to get home to), the band snuck in from stage right, settled into their instruments and got started, ’90s-style. Malkmus got real close with his guitar from the get-go, as if to let everyone know that he ain’t no slacker, he’s a goddamn guitar god. Warming up with “Mama,” then hitting stride with new tracks “The Janitor Revealed” and “Lariat,” the group caught the crowd’s attention quick and carried an intense energy for the next hour-and-a-half.

The thing about Jicks tunes are that they’re tighter than the average Pavement track, but they still carry a certain amount of loose tension, as if they could still burst apart any moment. Six albums in, with various drummers, the Jicks have outlived Pavement. The Jicks played heavily from their most recent album, Wig Out At Jagbags, the group’s sixth record since forming in 2000. Their vintage radio rock n’ roll era inclinations seeped through the ’90s alternative for nearly the entire set, but especially when Jake Morris sang lead vocals on ’70s smooth-rock tune “Chartjunk.” The more meandering guitar stretches were grounded by the solid bass playing of Quasi’s Joanna Bolme. During a break, Malkmus thanked “The Coach” for watching over the presidings, bantering about jazz, the Jazz and sports and rehashing their previous performance here.

After about an hour, despite being about 12 songs-or-so in, the set felt bloated with guitar jamming, before ending with “Senator.” I was craving classic Pavement tracks, and none would be delivered until “Speak, See, Remember” in The Jicks’ encore, which actually roused a tepid reaction since it followed a fucking great cover of Rush’s “Fly By Night,” sung Geddy Lee-style by Morris.

Overall the show was a slacker riot success, and I’m richer for having seen my slacker idol in all his slackity, slack, slack, slackin’ glory.