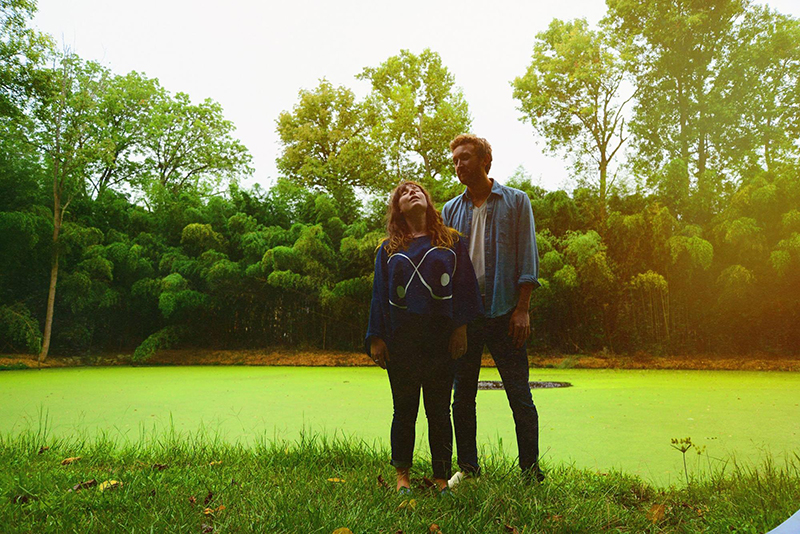 Durham, North Carolina’s, electro pop duo Sylvan Esso became an especially compelling cohort among the stellar 2018 Ogden Twilight Concert Series lineup Tuesday night. This marked only the second show of the season to sell out entirely—and on the day of—much to the elation of the crowd and the artists themselves. Vocalist Amelia Meath slid onstage with a clever challenge to the crowd: “Are you ready to feel your feelings?!”

A glowing, geometric-faceted stage setup with an array of synchronized rotating spotlights spun like a hive mind and lit alongside Meath’s vocal entreaties. The slight size of the venue made for a more engaging interaction, an especially enjoyable aspect of the Ogden Amphitheater. Sylvan Esso is an all-electro complement manned by only the duo Meath and Nick Sanborn, a talented producer and sound wizard. No additional stage accompaniment was included, leaving the audience to interact solely with Sanborn and Meath in all their skill and oddity. A properly sizeable crowd of eclectic indie consumers mingled with a jumbled haze of fruity vape and stanky smoke in the air. With a few hefty whiffs, one could easily develop a pleasant and emotional “contact high” from the ambience and the sounds emanating from Ogden’s emerald gem in the heart of town. Meath’s challenge to the audience to connect to themselves through the set seemed to be manifesting itself rather swiftly.

Straight away, Sanborn began twisting knobs voraciously to the clicks of his Tempest drum machine. His engaged electronic ministrations are a joy to behold and a representation of the challenge to keep viewers engaged when the instrumentation is purely buttons, dials, laptops and trigger pads. Meath’s unique voice was not betrayed by a live setting especially during hits such as “Signal”. Sanborn and Meath clearly love their “day jobs” as evidenced by their strange dyadic energy, which imports an odd intimacy. Such a performance could easily become flat-footed and tedious, yet this dynamic duo manage to maintain the vibrations through the entirety of their set. A small sea of voices sang along excitedly during several hits, including “Die Young”, with Meath’s strange gyrations as awkward and charming as her soulful vocal talent. Both display an unexpected athleticism in their onstage performances, something others such as their 2015 Tiny Desk set somewhat fail to capture. Any skeptics of their live execution would likely be mummed by their Ogden Twilight set.

Sylvan Esso’s music made for a lovely soundtrack to a warm, relatively humid midsummer night’s-midweek eve. Their bright, demi-pop electronica and house beats brought the historic Downtown alive in proper fashion. Ushering in the twilight with mellow hit “Coffee” served as a perfect choice for the second half of the act. An overall enthralling and joyful set came to a close with popular early hit “Slave To The Radio”. Perhaps the most memorable moment of Sylvan Esso’s resoundingly successful, sold-out Ogden Twilight set came as Meath summoned the crowd to a collective howl at the moon as the final threads of daylight drew bare. There was a sense the droves were indeed letting forth a primal wail of both glee and sorrow, something rather reflective of exactly what live music ought to be about—the limitless liberation of the inner voice.