00:00 / 16:39
Spotify Stitcher
RSS Feed
Share
Link
Embed
Very few times in my career have I had my expectations blown out of the water. Usually I’m happy if they are met because they are quite lofty in the first place. Temples owned Urban Lounge that evening in a way those walls could barely hold them. 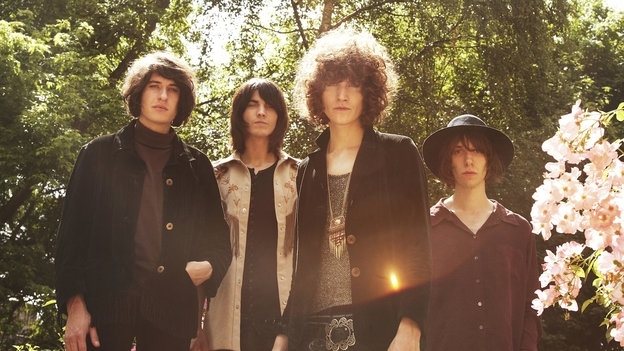 Temples have created one of the most entertaining and unique albums to cross the pond in some time. Photo: James Loveday

Bring a change of clothes. That was the advice Temples’ lead singer James Bagshaw told me, a few weeks before the show when I asked him what to prepare for. At the time I thought he was crazy because I couldn’t imagine psychedelic rock being rambunctious at all. I was picturing a mosh pit at a Moody Blues show and thought to myself, “You silly Englishman, Americans only mosh to heavy alternative and beyond.” Well, all that changed Monday, April 21. Salt Lake City was sufficiently rocked that evening and I write this feeling like a very silly American.

The Urban Lounge features an incredible sound system that also functions as a back massage if you happen to be leaning on something. Even Katy Perry sounds rockin’ under this beast of musical awesomeness. The crowd was the eclectic sort you’d expect from the Indie scene and the fashion forefront. The gentlemen were extremely presentable and the women seemed to have a leg tattoo prerequisite that was extremely apparent. As I’ve mentioned in prior articles, Utah loves to dance, and Urban Lounge has always been the premiere spot to let that inner funk loose. The pre-concert tunes were thumping away and the line for the bar was also substantial, meaning that this was gonna be quite the night.

Drowners came out to open up the event as their charismatic lead singer welcomed the crowd between massive swigs of beer. Drowners played extremely fast and did not break from that routine the entire set. In the bathroom I was speaking to an older gentlemen who complained, “Even their romantic song was fast. Geez, have they ever heard of diversity?” My date for the evening even commented that their songs were really, really short. Having grown up a punker I really didn’t mind, but the audience had a terrible time keeping up with the high speed tunes—most didn’t know how to react to the musical enthusiasm. Drowners left to polite, scattered applause but could easily be found the rest of the evening making beer runs back and forth.

What happened next could only properly be explained by the actual experience. When the Temples came on stage and started playing, every jaw at the Urban Lounge dropped. Nobody, including myself, had any idea how incredibly awesome this band was live. They played dance songs, they played thrash songs and they played songs that would have been very well accompanied with psilocybin. The dance moves displayed that evening were beyond comprehension and I sat in a trance with my eyes locked on nothing but the stage.

When I had spoke to Bagshaw a few weeks earlier I had asked him to play a B-side called “Prisms” that they usually don’t play in concert. I said I’d actually dance if he played it. He chuckled at the time and said he’d see what he could do. Well, the second song they played that night was “Prisms” and my clumsy old ass wandered out and did some type of geriatric twitch for the entire song as promised. I received several thumbs up from various patrons and I settle on the notion that they must be drunk or suffering from some type of visual discrepancy.

After the twitching had subsided, I retired to my booth and sat in wonder for the rest of the show. I kept thinking to myself, “This will be the last tour this band plays in the smaller venues.” The music played hard and the band stood poised amidst all the chaos like soldiers with shrapnel exploding all around. Temples do not come across as a one album band—they played with the maturity of seasoned vets. Between songs they spoke like the most polite hard rockers I had ever heard and I half expected them to apologize for the extreme amounts of ruckus their wonderful tunes were causing.

The crowd was so enthralled that they started cheering and clapping even before the songs were over. The crowd did not expect this type of performance—people were walking around saying, “What the fuck.” and “This is blowing my mind.” Very few times in my career have I had my expectations blown out of the water. Usually I’m happy if they are met because they are quite lofty in the first place. Temples owned Urban Lounge that evening in a way those walls could barely hold them. I finally understood what Bagshaw told me about the change of clothes and I cannot wait to see how this band grows into the phenomenal rockers they will certainly become. It’s no wonder Noel Gallagher praises this band. They deserve all that praise and more. There will always be a place for these U.K. rockers in Salt Lake City and we were honored by their first visit. Please come back soon Temples. Next time, we’ll be ready for you.