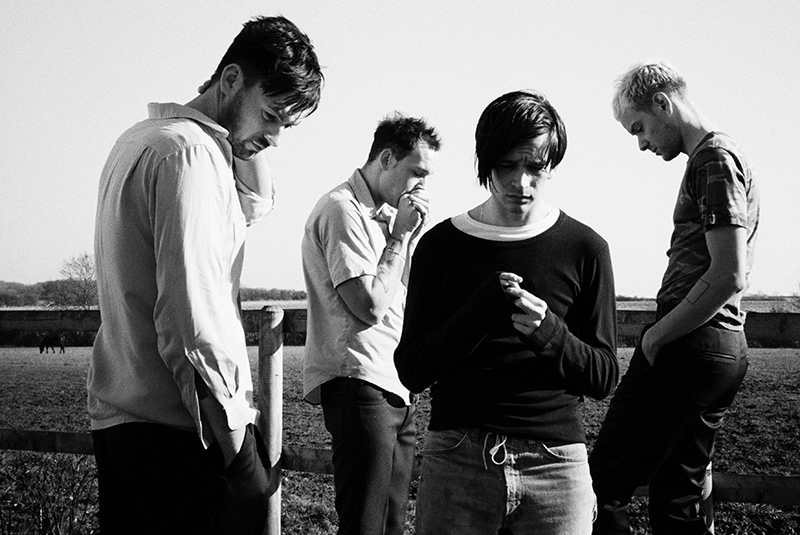 On their fourth coming to Utah, British darlings The 1975 surprised us with an unusually intimate venue visit. Since their teensy first SLC set at Kilby Court in fall of 2016 and their rise in the indie alt-pop scene that began in 2013, these four lads have been on a gradual yet steady lift into the upper echelon of the music industry. The band’s fairly hefty local fandom was spoiled with this pre-festivus feast, only publicized some two months ahead of showtime. Said fans arrived in the usual droves, even amidst the post-winter-storm frigid debacles and full-blown holiday hangovers.

Opener I Don’t Know How But They Found Me was a feisty pop-rock duo that included a festively gritty Christmas tune and a valiant attempt to rouse the crowd to a coordinated sing along. Hamming aside, the twosome was humorous and engaging, warming-up the demographically eclectic crowd.

The standard sonic preamble accompanied the headliner’s entrance, this time a soft, twinkling piano à la Brian Eno that faded into a low hum and eventually the band’s now-canonical self-titled track. Newer single “People,” from their upcoming album Notes On A Conditional Form thrilled the audience with its deliciously punk origins, followed by the similarly old-school and gritty “Give Yourself A Try.” The crowd kept pace with singing along as the band veered into their more poppy offerings for a moment before taking longtime lovers of the Mancunian lads through a short stint of catalog history with “Heart Out” from their meteoric debut album.

“Although he may be (on many levels) a consummate ego of the spotlight, Matthew Healy is undoubtedly authentic, compassionate and conscious, a brilliant figurehead for a modern rock band.”

The semblant persona of The 1975 is embodied in frontman Matthew Healy, an always oddly floppy mascot of postmodern British millennial angst. His mincing about with a dichotomy of crassness and innocence feeds the audiences falling in love with his eccentric charm at every venue. Healy paused the show mid-track for some crowd control as the barricade got a bit too bombastic, a move he’s engaged in at nearly every SLC gig to quell the libidinous aggression of the young’uns in the pit. It’s in moments like this that Healy displays his honest and unrehearsed conjuration skills. Although he may be (on many levels) a consummate ego of the spotlight, Healy is undoubtedly authentic, compassionate and conscious, a brilliant figurehead for a modern rock band.

Healy is known for pontifical and vociferous gabbing sprinkled amid the setlist. This time around, he regaled the amorous crowd with a specific show of gratitude for their increasingly nostalgic body of work and the ever-committed fan base thus far, followed by the ballad “I Couldn’t Be More In Love” and beloved epic pop-rock anthem “Robbers.” Another token Healy vulnerability moment followed after older favorite “Falling For You,” wherein he acknowledged the strangeness of his place in life and the varnished facade it necessitates. In something of an incomplete cogitation-turned-vocal stream of consciousness, Healy then served up the stunningly beautiful and moving track “Me,” a deeply personal treatise on the tension between self-love and self-destruction.

“On a cold night of an ostensibly cold year in a nearly untenably chilling era, The 1975 warmed hearts and threw a string of shimmering lights across the darkness.”

As on-brand as can be, The 1975 completed their set with Healy’s typical brief political treatise asserted before the autotune earworm “I Like America And America Likes Me.” followed by the über-hit “Somebody Else” from their acclaimed sophomore album, I Like It When You Sleep, for You Are So Beautiful yet So Unaware of It. Healy then treated the crowd to one of his personal favorites, the sweet strawberry sonic pop-tart “Paris.” In an equally delicious albeit more savory joy, rallying cry “Love It If We Made It” was mixed with a tuneful melange of the guitar riffs from the funky Love Me, specifically during the jaunty bridge of the song. Perhaps not a trick less dyed-in-the-wool fans would have noticed, it was a clever nod to the more hardcore followers in the crowd.

The 1975 concluded their early Christmas gift to us with original the breakout singles “Chocolate” and “Sex,” with the bands forever fervor in full force onstage. Now a tradition to their setlist, they closed the rousing night with equally exhilarating “The Sound,” where once again Healy & Co. commanded the joyful crowd to “fucking jump” for the latter half of the song. The sea of gleeful bodies obeyed in another stunning display of collective and synchronized exultation. It’s in moments like that one is reminded what music and live performance accomplishes—gathering a wide swath of mostly strangers in a precious moment of unity. On a cold night of an ostensibly cold year in a nearly untenably chilling era, The 1975 warmed hearts and threw a string of shimmering lights across the darkness. I know I will be glad to have them back again very soon. –Paige Zuckerman