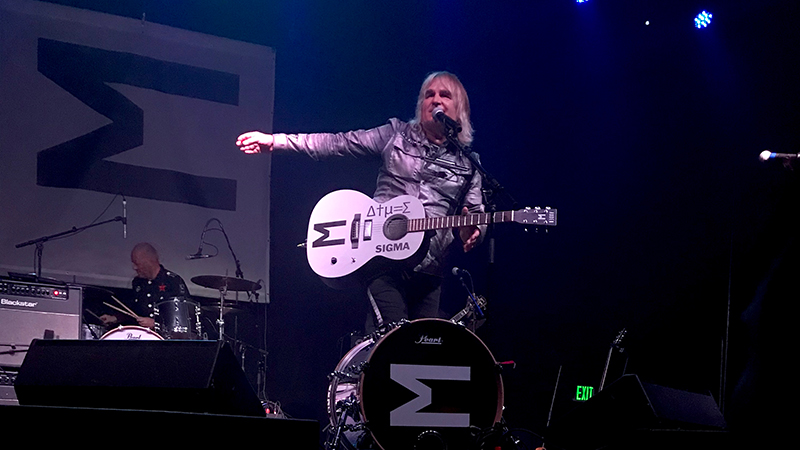 It’s a muggy summer evening and the rain has just started to fall on the dozens of early-arriving punters waiting impatiently for The Alarm and Jay Aston’s Gene Loves Jezebel.

“So let it thunder, let the heavens open…”

The last time Aston and the Jezebels were in Salt Lake City was an unusual impromptu acoustic performance at Rye Dinner and Drinks in September of 2018. It was an unforgettable evening that nearly didn’t happen due to a miscalculation of distance and time between the previous night’s gig.

“Sweet, Sweet rain. Feel the rain on your face…”

It had been a decade or so since Aston, guitarist James Stevenson, bassist Peter Rizzo and drummer Joel Patterson had toured America.

In their absence, Michael Aston, Jay’s brother who left the band during the House of Dolls era, has been known to tour under the Gene Loves Jezebel banner with a rotating cast of characters, including guitarist Michael Ciravolo (Beauty in Chaos, Human Drama). But, with all respect to Ciravolo, it wasn’t Gene Loves Jezebel.

“Behind the clouds, the sun is always shining…”

The set begins with “Twenty Killer Hurts,” a joyous slice of non sensical sing-a-long pop from 1988 that finds Aston shrieking and bouncing as he stalks the stage. His frantic energy exudes a certain confidence that demands your attention. He’s not awkward— there’s too much Mick Jagger in his moves for that— but he’s unconventional. No one showed him how to be a frontman; he just did it.

Where some performers lose a certain amount of their charisma when strapped behind a guitar, Aston prances and struts unhindered with Daphne (his new coral-blue guitar) during “Sweet Sweet Rain” from the group’s 1993 overlooked release Heavenly Bodies.

All the while, Stevenson, Rizzo and Patterson sit back and paint a background for Aston. Occasionally, Stevenson throws in a windmill strum as he moves to the front of the stage or Rizzo drifts from his stage-right position to interact with his bandmates.

“Heartache” speeds up the tempo and takes the audience back to 1986’s Discover before reaching “Bruises,” a classic track from their 1983 debut Promises. History revisionists will insist that the band strayed from its art rock roots somewhere in 1985, but “Bruises” proves otherwise. It’s every bit as anthemic as their post-Immigrant material.

“Jealous,” which Aston offers as evidence that the band does like to rock, is the sole representative from 1990’s Kiss of Life. The audience responds in kind.

The House of Dolls single “The Motion of Love” inspires some unsolicited audience participation.  “Break the Chain,” a massive hit in Portugal that was lost in the shuffle of Savage Records’ collapse in America in 1992 (a fate shared by David Bowie’s Black Tie White Noise).

The Jezebels’ night ends with crowd favorite “Desire (Come and Get It).” They’ve only scratched the surface of their catalog, but considering the confines of their opening slot, it’s a fantastic set.

This is the third time I’ve seen The Alarm in as many years. Prior to 2017, I had only seen Peters play an acoustic set as an opener for The Mission UK and Gene Loves Jezebel in 1999.

The set begins with “Blood Red Viral Black,” a track from The Alarm’s 2019 release, Sigma, which was a sequel to 2018’s Equals. Recorded with The Cult’s Billy Duffy, the song is a wall of noise reminiscent of The Alarm’s early material with an acoustic bridge in the middle that speaks to Peters’ willingness to stray from the status quo.

“The Stand (Prophecy)” from 1984’s Declaration is the first of the group’s classic singles that have become standards in The Alarm’s sets. This doesn’t dilute its effectiveness; the set would feel incomplete without them.

“Peace Now,” a song from Equals that feels increasingly relevant, leads into 1987’s “Rescue Me” from The Eye of the Hurricane.

Peters dusts off the Change single “Sold Me Down the River.” This is personally significant as it was the first song I remember hearing by The Alarm when I started to get into music in the late 1980s.

“Psalm” sees the group return to Sigma. It’s an acoustic number that slowly builds into a sing-a-long anthem. For “Neutral,” another track from Equals, Peters makes his way from the stage into the audience, where he is warmly received by a sea of fans who have all pulled out their phones to capture the moment.

Like an escape artist, he’s back on stage for “Strength,” the title track from the band’s second album, and the euphoric “Rain in the Summertime” that strays into The Killers’ “All These Things that I’ve Done.” Peters speaks warmly of Brandon Flowers before strumming his way into

“Beautiful,” a three-minute song from Equals that thrashes its way through the songwriter’s post-punk origins.

The set closes with “Spirit of ’76,” a medley of “Marching On,” “Where Were You When the Storm Broke” and “Sixty Eight Guns.”

The encore sees Peters return to 1983 with “Blaze of Glory” before ending the night with another Equals track, “Two Rivers.”

Peters is a great performer. You almost take for granted that he’s going to give a fantastic performance, but when he takes the stage he surprises you with his energy and passion.

I’m a little surprised that the set featured four tracks from Equals and only two from Sigma, but I’m not disappointed. Equals is a fantastic album and I can’t imagine what a night would feel like if it didn’t include “Beautiful” and end with “Two Rivers.”

In a perfect world, both The Alarm and Jay Aston’s Gene Loves Jezebel would have been allowed to play all night. No one in the audience would have minded. I don’t even think Stevenson, despite playing in both bands, would have protested.