To a thunderous welcome from their devoted audience, The Black Lips furiously launched into their set, opening with the garage rock number “Family Tree." 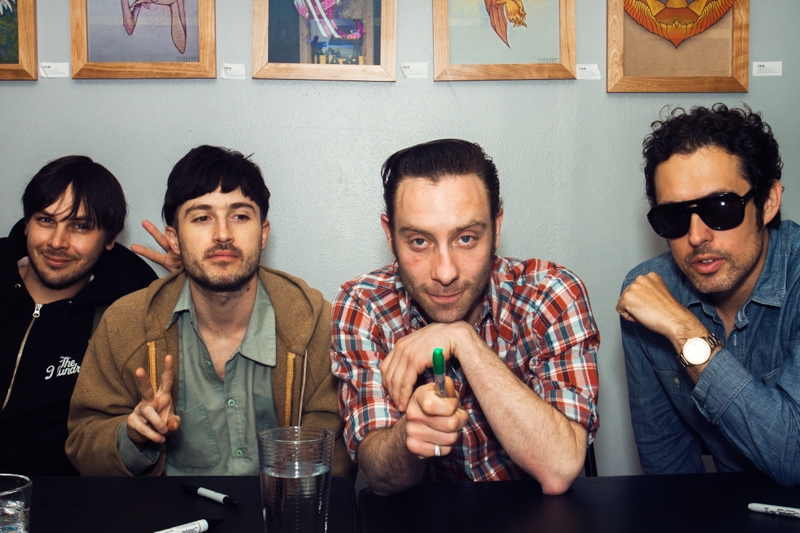 The Black Lips sit behind their signing table at Diabolical before the show, and get together for a quick photo. Photo: Talyn Sherer

Making the nightly pilgrimage to a rock n’ roll show is like testing the faith of a devout follower. The journey is filled with radically shifting weather patterns, miles of concrete terrain, and the flashing lights of the local patrol vehicles. Unfortunately despite knowing that they are around, it does nothing to sooth my anxiety, and rather, it extenuates it. It is at my destination, Urban Lounge, where my guard is relaxed as I am surrounded my other weary but excited travelers. Though we are strangers, our sub-cultural tastes and style of leather and denim easily identify us as like-minded, for it is clear that we are here for the same reason: To be delivered a fast, raw and furious sermon from The Black Lips, The Coathangers and local act Holy Water Buffalo. Hopefully, we’ll save our immortal souls, by damning them to a frenzied filled night of rock n’ roll.

As they readied themselves, the drummer of Holy Water Buffalo continuously played an execution march–styled beat. This contributed to a feeling of building anticipation, perking my interest. Finally, they launched into their set, grooving through it with a folky, muddy pop-like sound. They reminded me of a mix of “Maxwell’s Silver Hammer”–era Beatles with some Big Star and a noticeable dash of Ryan Adams. Their vocalist delivered harmonious melodies that blended Bob Dylan and Marc Bolan. I’m not usually a fan of this style of progressive rock, however, they brought something different and fun to Salt Lake. I easily sympathized when out of the audience, someone yelled out, “You guys kick ass.”

The Coathangers’ presence on stage was radically different to Holy Water Buffalo. While the latter were relaxed while playing, this punk rock trio positioned themselves in front of their audience with aggressive assertiveness. Prior to taking the stage, I had noticed them walking around the crowding venue, in a style that was nostalgic of The Ramones. They exhibited a gang-like attitude in their matching white denim jackets, with their band name printed on the back. Met with mass applause, they wasted little time in blasting out raw, punk-styled numbers into the waiting mass of people. These numbers were charismatically performed, combining the ferocity of a lineage that reminded me of The Slits, La Tigre and The Runaways.

As they channeled their energy into the eagerly receptive audience, they played songs off their new album, Suck My Shirt. Each one was a bit different from the other. They knocked out funky-type tunes with heavy breakdowns, while others seemed more hardcore influenced. Alternating vocalists, they each took turns playing different positions. One song could have a very catchy, poppy post-punk style delivered from Crook Kid Coathanger. The next could be belted out with harsh, tequila-soaked vocals courtesy of Rusty Coathanger. Not initially familiar with them prior to this gig, this captivating encounter blew me away. It’s not every day that I get to see something unique.

The Black Lips filled their own niche during this night’s performance. Setting up, they inspired a suspenseful buildup of excitement. Before coming out, I had read about notorious stunts at their gigs (check out SLUG’s interview with them here). In addition, I had seen them earlier in the day at their record signing at Diabolical/Albatross Recordings. So, I was keen to see how this shindig would go. While a majority of the packed house remained fixated on the stage, I took the time in between sets to find a good place to observe. This was not easy, as even my slender frame found it difficult to navigate the increasing thickness of the sweat and beer smelling populace.

To a thunderous welcome from their devoted audience, The Black Lips furiously launched into their set, opening with the garage rock number “Family Tree." Then they followed with up with the freakbeat sounding “Modern Art.” Their onslaught blasted intense energy into the crowd, inspiring everyone from the very front to the outskirts to start shaking and twisting. Kind of like a ripple effect, I confess I have never seen a more awake crowd at the Urban Lounge, who, by the time “Katrina” was being played, were acting like they were witnessing the Beatles in 1964. The only downside to this spectacle was that the speakers did not initially seem to be able to handle The Black Lips’ raw sound. This was eventually remedied. The other issue was the whiplash effect of the Black Lips constant pause in between numbers, though this didn’t seem to bother the gyrating and stagediving audience.

Continuing through, The Black Lips played throughout in good spirits, seemingly enjoying every minute of being on stage, even passing out the occasional beer to someone lucky up front—something they seemed to have plenty of. They knocked out tunes like “Drive by Buddy” and “Boys in the Wood” off of their new album, Under the Rainbow, both of which were well received. Concluding with their outsider anthem, “Bad Kids,” they briefly departed the stage, but not for long, as they came back and conducted the customary encore, during which they played “Wild Man” to an ecstatic audience.

By the end, a large percentage of the thinning audience had overwhelmed the merch table. I was lucky to get my hands on a Coathangers 7” with "Adderall" on it since their new LP sold out. With some encouragement, a moderate number of people stuck around for the DJ set being put on by The Black Lips. Taking advantage of the open dance floor, this remaining contingent of rock n’ rollers twisted to the 1960s garage and pop rock n’ roll records being spun. One has to admit, having the energy to do a DJ set after being on the road and blasting out a gig with commendable energy is pretty cool. I’m sure the beer helped, though.

Check out photos from the Black Lips record signing at Diabolical Records here.