Finally, it was time for the show’s centerpiece. Let’s get something straight, right off the bat. The Blue Aces are what rock and roll is about. No joke. They are, to borrow a term from the streets, “Da Truth!” After a few minutes of set up, the lights went down and drummer, Alisa Ramirez, started into the opening beats of “Heartbreaker” as the crowd went crazy. 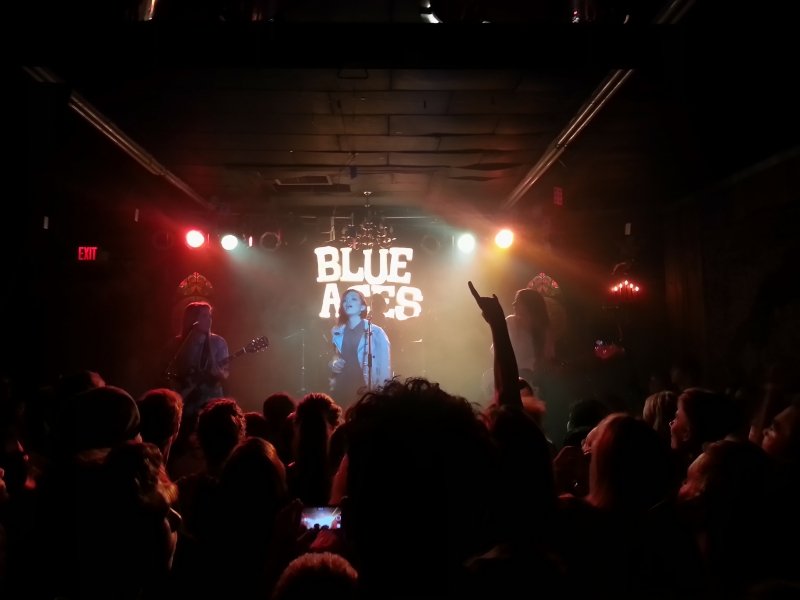 Join me, if you will, on a journey through time and space using Neil deGrasse Tyson‘s Ship of the Imagination (if you’re not watching Cosmos, then you are absolutely failing at life). The year, 2032. The place, 40 miles off of the South coast of the island formerly known as Crete (now known as Vladia, after a bit more than a decade earlier Russia having “accidentally” annexed it, most of Greece and part of Albania … fucking Ruskies). I’m lounging out on my 150-foot yacht (purchased, of course, by all the scratch I’m pulling down as a staff writer for SLUG Magazine), smoking a giant stogie and sipping on cognac. I turn to my butler Sidgie or (maybe it’s Widgie, his identical twin) and ask him to bring me my vintage compact disc player and a copy of The Blue Aces Greatest Hits—the best selling album of all time. I turn to Sidg…Widgie (?) and say, ”I saw this band way back when.” My thoughts wander to that mild April night in Provo, and a smile comes across my face.

The evening started out perfectly, with me devouring three La Campechana tacos and a bottle of MexiCoke from the fellas at Pico Norte Tacos. Delicious. It continued in greatness with the two opening acts, June Cat and Ocean Commotion. June Cat, a two person acoustic folk act (composed of Taylor Olson and Colin Hatch) that made the crowd absolutely fall in love with them, so much so that by the end they were singing along to the pair on stage. Ocean Commotion was very different—a throwback to the glory days of ska-influenced pop-punk, when bands like Sum 41 and Yellowcard ruled the world, but with a synth twist. They were raucous and exciting, and had the crowd jumping and dancing for their entire set.

Finally, it was time for the show’s centerpiece. Let’s get something straight, right off the bat. The Blue Aces are what rock and roll is about. No joke. They are, to borrow a term from the streets, “Da Truth!” After a few minutes of set up, the lights went down and drummer, Alisa Ramirez, started into the opening beats of “Heartbreaker” as the crowd went crazy. Bassist McKenna Petty and guitarist Katie Henderson joined her moments later, followed by Cristal Ramirez (lead singer). From jump street, it was obvious that the all-girl band, none of them old enough to vote, was there to rip the crowd’s collective face off. The set continued in this fashion, with songs from the newly released EP, Gave You My Heart, as well as their 2012 self-titled EP. They also covered the Hall and Oates classic “I Can’t Go For That (No Can Do),” one of the many high points of the night. The knockout song of the performance, however, was “I Just Lie,” a hard-edged bluesy number about an apparently bad relationship. They ended their set with their single “I Don’t Wanna Know,” a brilliant, radio-ready pop rock gem and the understated “Dear Moon.” A very good ending to an incredible set.

“It was an amazing night, Widgie,” I say, as I sip the rest of the cognac and stare off into that Russian (formerly Greek) sunset, “I knew even then that they were going to make it. They may even owe their success to that premonition.” Sidgie presses play on the ancient machine and my thoughts drift again.

Seriously though, if there is any justice in the world, this whole slightly made up scenario will come to fruition, because those four young ladies deserve to be huge and I deserve to be rich enough to employ a butler. The only risk, I guess, would be the Phoenix-esque rise of of the former Soviet Union—but that is a risk I’m willing to take.