SLUG Mag Soundwaves
Episode #392 – Homephone
00:00 / 17:29
Spotify Stitcher
RSS Feed
Share
Link
Embed
Glancing at the program, I noticed that the ages of the instruments that this quartet were going to play ranged from the newest being a 233-year-old Giovanni Battista Guadagnini violin to the oldest being a 423-year-old Luigi Mariani viola. I wondered about the different musicians hands that held and played these fine instruments through the centuries. The quartet would be performing pieces from Haydn, Dohnanyi and Debussy.

The Chamber Music Society: Growing With The Modigliani Quartet 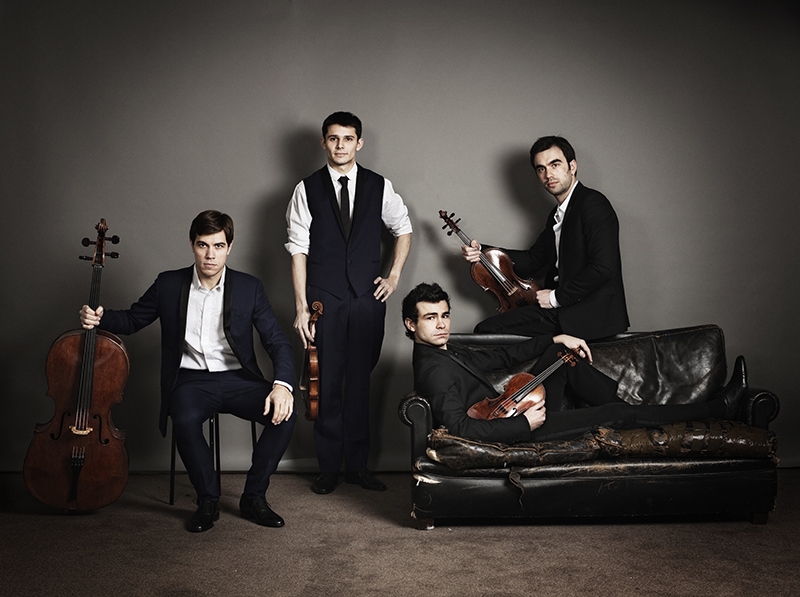 I really did not know what to expect when I walked into The Libby Gardner Concert Hall. I knew I was in store for relaxing, classical music. The Chamber Music Society was hosting The Modigliani Quartet from France. Other than a promotional picture on Facebook, I knew nothing of these artists.

As I stepped into the Hall, I was greeted by very bright lights and a room lined with the most beautiful wood—which created amazing acoustics. By the lack of speakers, fog machine, keyboards and microphones, I knew I had stepped into a world much more calming than my typical norm. On the first level of the stage sat two chairs, two benches and four music stands, and on the next level sat a glorious pipe organ spanning at least 60 feet. I could only imagine the haunting sounds that would bellow out of it.

Glancing at the program, I noticed that the ages of the instruments that this quartet were going to play ranged from the newest being a 233-year-old Giovanni Battista Guadagnini violin to the oldest being a 423-year-old Luigi Mariani viola. I wondered about the different musicians hands that held and played these fine instruments through the centuries. The quartet would be performing pieces from Haydn, Dohnanyi and Debussy. The lights dimmed and four younger gentlemen took the stage. I thought they must be world renowned musicians and musical geniuses to be able to play with such beautiful artifacts at such a young age. Scenes from the movie Amadeus ran through my mind.

The bows began to dance and the music began to flow, evoking a beautiful ballet. It appeared the room was just as enamored with what they were hearing and seeing as I was. When there was a low in the music, it was so silent you could hear the quartet take a breath or slide their shoe.

It is obvious they have played together for over a decade as they knew each other’s body language. They had impeccable timing with their harmonious and profound dynamics. With closed eyes, their bodies seemed to just feel the musical movement and the sounds poured out. The leader of this quartet was the first violinist, Phillipe Bernard. When the three others did open their eyes, it was to briefly check their music sheet and they would look to him for cues. Bernard seemed very comfortable with his craft and his cool demeanor breaks the uptight first violinist mold. He sliced the sounds out of the air with his bow, causing his violin to sing. The second violinist Loic Rio and the viola player Francois Kieffer did not stand out to me as much as the gentlemen on the ends, but that might have had something to do with the position where I was sitting in the hall. Although, I did notice that in some pieces, their timing with the bows was like watching falling dominoes, producing a beautiful scene. At times it was almost as if Francois Kieffer was making love to his Matteo Goffriller cello that was created in 1706. By his euphoric state, it appeared he was enjoying every stroke, pluck and touch, truly involved, body and mind, in the music he was creating. The vibrato on his notes was perfection, not too wide and the appropriate length—his intonation was amazing.

The music was so beautiful, and it was played with perfection. There was aggression shown while the intense pieces were played. It was an aggression that was carried out with grace. A different sort of head banging was taking place, not by the audience but by the musicians on stage. I was thoroughly entertained. There would be no mosh pits here—I giggled as I looked around the room imagining these folks circling and throwing elbows.

The performance was finished and a standing ovation was given to the gentlemen—there was no screaming for more, only applause. Then, the gentlemen took their bows and left the stage, returned and left again, but the applause continued until they returned and gave an encore performance. I was pleasantly surprised at the level of respect the audience had shown.

A classical art was revealing itself to me. Sheet music, suits, and the silence between songs showed me that I was in another world. It was not the turning of the knobs, tweaking distorted sounds, and advanced musical machinery of today’s age. It was the art and music that transcends all time. A very quiet, calm and relaxing evening had taken place. I was not bored, I was intellectually stimulated and hungered for more. It was a new world, a surreal world I stepped into, and I will be returning to it often. Don’t miss the next Chamber Music Society concert on Jan. 27 featuring Isabelle Faust on violin and Alexander Melnikov on piano.