Following the release of their latest album, Love Death Immortality, just last month, the Los Angeles-based group took their tour to BUKU for a performance that left everyone in awe. 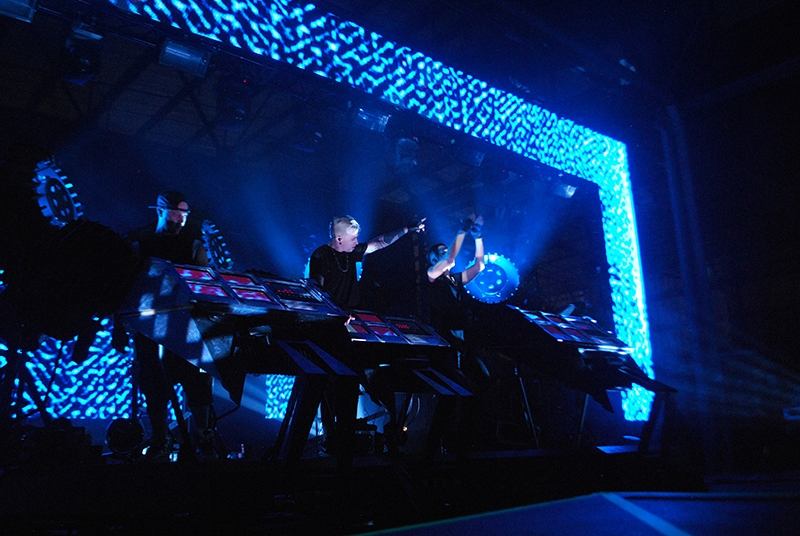 Each of the three stations held four iPads and a mixing table, as shown in their music video for their song “Beyond Monday." Photo: Julia Sachs

Following the release of their latest album, Love Death Immortality, just last month, the Los Angeles-based group took their tour to BUKU for a performance that left everyone in awe. Just before they took the stage, their booth was unveiled showing three separate robot-like stations that kind of resembled a spider as a whole with a set of large drums in the back that looked more like industrial fans than instruments. Each of the three stations held four iPads and a mixing table, as shown in their music video for their song “Beyond Monday." It seems as if DJ’ing from an iPad is the newest fad in live music, as the Colorado-based artist Paper Diamond did the same just the day before at BUKU as well. Being able to DJ from an iPad enabled the producer to walk around the stage and control the music at the same time, allowing for a more interactive concert experience. However, each of the four iPad’s at The Glitch Mob’s show were set inside of the stations and were faced towards the crowd, so the audience could see each beat being made throughout the performance. Meanwhile, the lighting coming from the VJ booth in the back of the room added to the experience while LED screens were set behind and around the front of the group, as well as on each post in the warehouse around the crowd. Strobes set behind the group put them in a silhouette on each beat change.

The group took the stage and began their set startlingly, blaring the most bass out of any performance over the entire weekend. They opened with their newer music and then went into their older stuff while progressing into their remixes in between. While their newer music sort of shows the group’s take on traditional EDM, the album transfers well into a live setting when they put their own twist on it. The Glitch Mob always put on a really great show in the times I’ve seen them in the past, and their latest performance will not disappoint the long-time fans. The group closed with their single, “We Can Make The World Stop,” before playing one encore from their latest album.

In between songs, the emcee of the group announced that he was excited to be performing in his hometown of New Orleans and the crowd cheered for him as people flooded into The Float Den stage to watch the rest of the show. Their latest tour in promotion for their new album stops in Salt Lake at The Complex on April 28 as well as other festival stops this spring such as Coachella in Indio, California and Miami’s Ultra Music Festival this coming weekend. You can find tickets to their show as well as other tour dates and information on downloading their new album on their website.

Check out a review of Ellie Goulding’s BUKU performance and a full profile of the festival here.