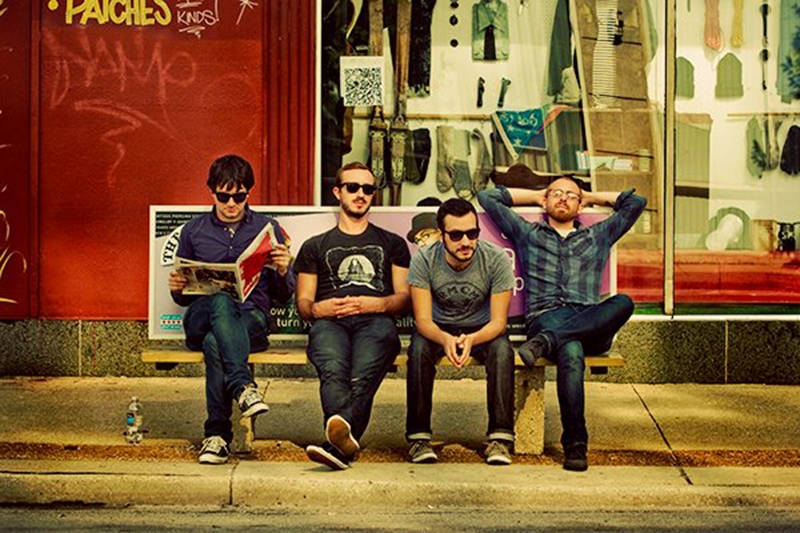 The Menzingers’ energy was infectious. Photo courtesy of Epitaph Records.

“Hey, you know what? Fuck the rest of PUP!” screamed guitarist/vocalist Stefan Babcock in an attempt to get their other guitarist to the stage. After Babcock’s first snide comment he still didn’t show up, to which Babcock laughed and topped it off with “you know what forget it, we can play the show without him!” Then I heard from outside, “Coming! I’m coming!” and Steve Sladkowski picked up his guitar and continued to setup. Babcock lightheartedly gave him more shit for being late and got ready for their set. What a way to start a show! Well, it at least was starting for me—I had arrived late and missed Cayetana’s performance, barely catching the last couple of minutes of their set. I felt horrible missing it but was happy that I was in time for PUP, and judging by the way things were going thus far, it looked like it was going to get pretty God Damn entertaining.

After Sladkowski finally got set up the band got busy producing some static feedback and noise to get the energy rolling, and then jumped right into “Guilt Trip.” And it may have just been Kilby’s sound system, but PUP’s sound, as loud as it was, was incredibly crisp—which was amazing considering the amount of distortion and drum work that were used on their songs. However, breaking through all that distortion were Sladkowski’s melody-driven guitar components that were a necessity to PUP’s sound—it was obvious that they could NOT play the show without him. Other than the sound being incredibly pristine and Babcock messing around with the audience saying that Salt Lake was 20 times better than Kansas, their energy was off the wall—bassist Nester Chumak kept his head-a-bangin’, as Babcock and Sladowski were working on stomping a hole in the floor, while I was watching for Zack Mykula’s explosive drumming to knock over his drum set. They ended the set with “Reservoir” bringing the entire audience up to the mic singing “You’re on your own! I’m letting go at the reservoir! You’re sinking like a Stone! We had it all and it fell apart!” PUP was a lovely high-energy experience to get the audience ready.

Lemuria was next to seize the stage, bringing all the hyper activity left by PUP down to a more mellow tone with their more somber sound. Their ‘50s dance-like drumbeats were what kept the energy moving—enticing the audience to start doing the Twist and keep their feet tapping and heads bobbing. Alongside the dancing, the audience kept in compliance with the lyrics to the point where Lemuria stopped playing altogether and let the audience fly solo to sing the lyrics without sustainment with the band. My friend nudged me and told me how awkward it would’ve been if it stayed silent when they did that. I couldn’t stop laughing! I kept imagining the audience staring at the band in confusion and vocalist Sheena Ozella hastily scrambling back to the mic and awkwardly getting the lyrics out, ultimately making a fool out of themselves. But that didn’t happen here—everything went through smoothly thanks to Lemuria’s faith that their fans dedicated themselves to listen to their songs over and over again until the lyrics were engraved in their subconscious.

Lemuria finished their set and started to make way for The Menzingers. The crowd, naturally, was getting restless, and who could blame them? The last time Menzingers were meant to play a show in SLC, they got snowed out. Now that they’re back, there should be no excuses for them to give anything short of an overwhelming performance, and with a new album under their belts it seemed unlikely that they would fail. Well opening up with the debut track on their new album was a good way to start off—when “I Don’t Want to be an Asshole Anymore” started playing, its pitch perfect buildup was just the thing to get the audience’s energy stirred up. Then, they hit them with “Good Things” and by doing so they unleashed a monster of raw emotion and lyrical compliance rolled into a ball of pure fanaticism—this was the beginning of what was to come for the rest of the show.

Keeping an even mix of new songs like “Rodent,” “Transient Love,” and “Where Heartache Exists,” and older songs such as “Casey,” “I Was Born,” and “Deep Sleep,” the crowd never got restless—they never missed a lyric and they were always in some form of movement whether it was pogo dancing or head-bobbing. The Menzingers’ energy was constantly matched by that of the audience—constantly smiling for them and thanking them between songs, even doing an encore without having to wait for a chant or even walking off the stage. They closed the set with “The Obituaries” and they could not have chosen a better song to do so—with its emotionally enthralling chorus it brought the entire front row to climb on top of the line of PA speakers and start screaming “I will fuck this up! I fucking know it!” bringing the all around high energy show to a satisfying conclusion.