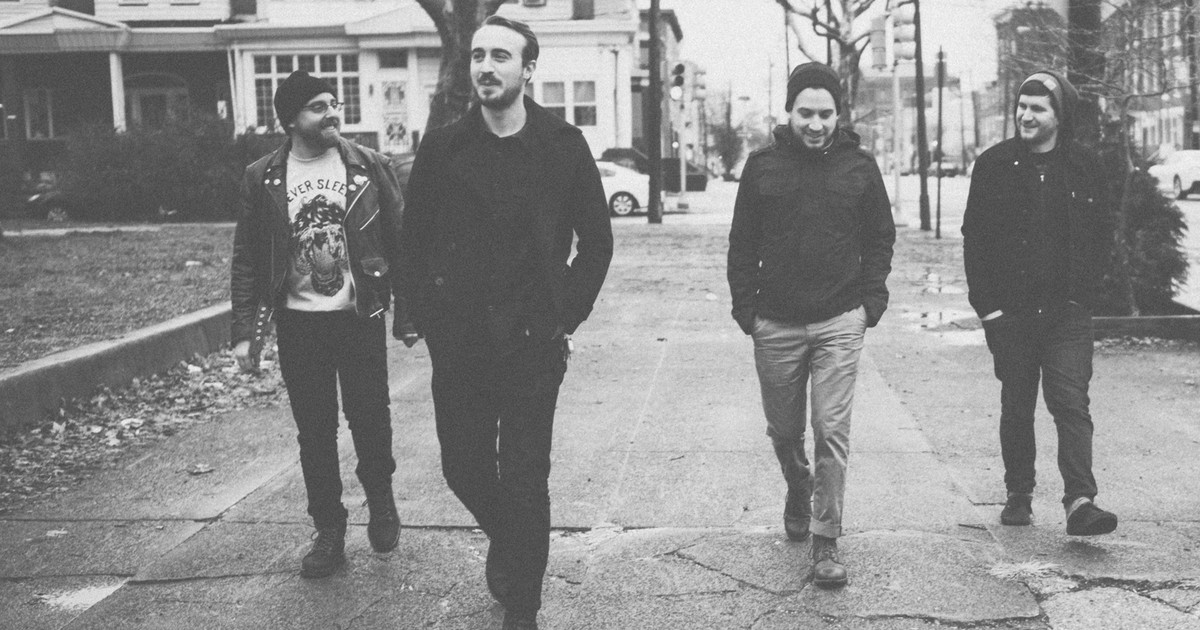 The Menzingers @ The Complex with Pianos Become the Teeth, meWithoutYou, Restorations

We’re at that time during the year where I’m in the process of adjusting to the cold and it was frankly too damn cold for a show. This is the second time I’ve been to The Complex within the last month. Last time I was there, I spent most of my time in the pit area, this time I decided to sit at the bar area and watch most of the show from afar. Like Caesar, I sat up on high with a Fat Tire in my hand, commenting on the show with a friend.

First up to bat was Restorations, a band from Philly. These guys have a heartland rock/post-hardcore sound, but with semi-Springsteen vocal style. The guitars have a swirling, rounding sound with injections of fleeting guitar solos—think The Appleseed Cast. Their dynamic onstage was interesting. Most of the band was stiff, focusing in on themselves, ensuring a quality product, but those onstage-left were amuck with movement and vibrations. The lead singer, Jon Loudon, twirls and does that leg tap people do in place of dancing, throwing his guitar between the verse and chorus. But the real show was Dave Klyman. I know he loves every moment he spends in front of an audience with that band. If I were to pick out the guy who formed the band or is their prime mover, it’s him. Klyman is hardly self-contained to his corner of the stage, bouncing off of Loudon, nearly rolling off the rim of the stage, a chaos bubble that made me anxious he’d trip on his amp cord and do a stage dive onto cold concrete. They were the band I was the least familiar with at the show and I must say, they’re pretty impressive.

Up next was Pianos Become the Teeth, a band that took me by storm a few years ago. The Lack Long After was a natural sequel to my Eons obsession. While their most recent album, Keep You, is a little less angry sounding, it is still one of my favorite albums of 2014. Most of the show consisted of Keep You, with its hazy mist of jangled guitars and sorrowful harmony. Kyle Durfey, lead vocalist, is a tree in the wind, bowing and shifting from the trunk up. His microphone shifted positions with little regard for practical sound amplification, but dammit did it look cool. Colors shifted between blue and green on the stage, behind the band a cloth background with a symbol that looks like the Death Star. Like Restorations, the band is stiff, focusing on their craft, holding close to their neck-wood and ensuring it’s expressed correctly. “Ripple Water Shine” shimmers in radiant azure beams across the room, crawling the walls and dissipates out to the glossy commons. From up high and afar, I felt as an empty cup, refilled, after their set.

After a second Fat Tire, my friend and I decided to waltz down the stairs to join the horde for mewithoutYou. My teenage years consisted with having mewithoutYou in the peripheral of my own musical tastes. My friends liked them, but I was too focused on Minus the Bear, Circa Survive and a hodgepodge of folk and punk to really give them my full attention. Earlier this year, I read an article about Pale Horses and decided to give them a try. It was a sonorous album. The band’s lead singer, Aaron Weiss, is a Michael Stipe yoga instructor on the stage. Stretching as if he just woke up at the oddest of angles, Weiss bounces around the stage in a bubbled excitement, throttling maracas in his white-knuckled fists. “Timothy Hay” reminds me of the quirky spirituality you find in Sufjan Stevens’ work. The music is intricate, but clearly the focus is the poetic content in the lyrics washing over the audience. The soft rhymes and off prosody are a man on stilts walking in a mine field—careful, intentional.

Closing out the show was The Menzingers, a band with a heart and something more. Like many of the bands that played on the stage, The Menzingers are also from Philly. The guys also have a close place in my heart, a band that resonates, their music is therapy these days. They started with “Good Things,” the song that got many people hooked on them—it’s low-limbed sadness and pangs of grief. The audience had shrunk—it was a Monday night and many people have responsibilities—but it was the right size for that set. Tom May bounced around the stage, owning most of the area for the band, flipping his guitar and jumping in a manner reminiscent of ’90s punk bands. He never seemed to sweat or get tired for the entire hour. They played a mixture of a Rented World and On the Impossible Past, even a cover of “Kate is Great” by The Bouncing Souls, which was awesome. The Menzingers closed out the show with “The Obituaries,”  the crowd hugged in towards stage and shook feverishly, the song tramples in an all-American riffs with a smattered snort-sheen vocals, then slows down to clean vocals. The song ends with a chant of “I will fuck this up. I fucking know it,” and ain’t that life.