00:00 / 20:24
Spotify Stitcher
RSS Feed
Share
Link
Embed
The night of January 25, 2014 was a “welcome home” of sorts for these local art scene favorites and the Provo faithful were in full swing at the sold-out show. The lights finally went down, as they often do before headliners and vigorous bowling competitions, and The Moth & the Flame welcomed everyone to their show. Little girls screamed and pats were received on several backs. This was a non-alcoholic show, so the pats were about as intense as the well wishing became. 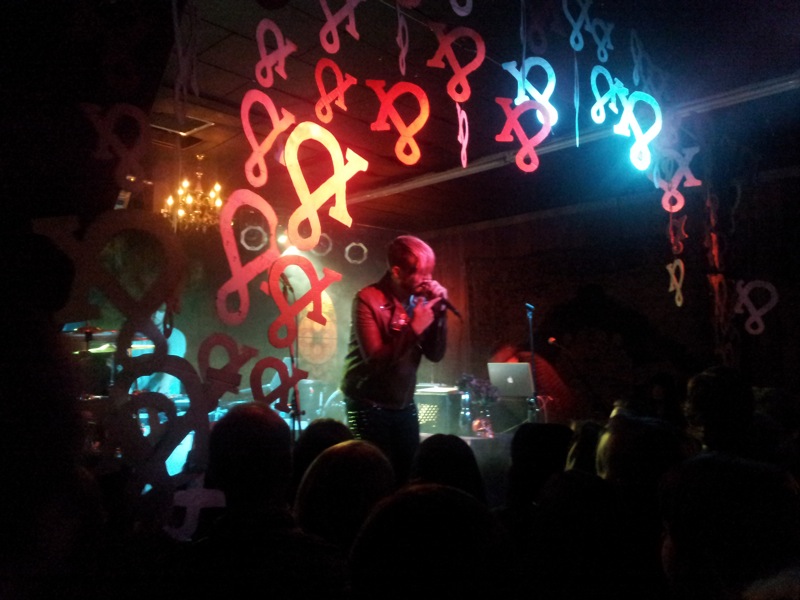 The presentation of the Velour Art Gallery is everything you’d expect from an art gallery. It’s gorgeous, alluring and you can almost feel it draw you in to its environment. Hanging from the ceiling are hundreds of upside “&” symbols representing the band’s recent EP that came out last October. Many fans of The Moth & the Flame were snubbed on an album tour last year because Imagine Dragons whisked them away to Europe shortly after its release. The night of January 25, 2014 was a “welcome home” of sorts for these local art scene favorites and the Provo faithful were in full swing at the sold-out show.

The L.A.-based art rock band has roots in Provo prior to this major label release and the crowd was twitching in anticipation for their much-deserved headlining performance. Three bands appeared on the bill that Saturday and Apt was the first one up, doing their best to quell the nerves of the impeccably dressed audience. Art rock shows bring out the best in youthful creativity along the lines of fashion. You can look onstage and see a studded out rocker, then turn your head slightly to the left offstage and see no difference in presentation. I even adorned a tweed sport coat for the event so I wouldn’t arouse any suspicions in my general lack of non-trendy-ness.

Apt (Adam Hochhalter) had the crowd into it from the start with his hip-hop swing and fluid stage presence, making it easy for Toy Bombs when they appeared. The crowd was screaming. The gears of rock had already been greased.

Modern rock has become wonderful because people are actually dancing again. My first decade in this genre had me standing at most shows nodding my head mindlessly as some allegedly depressed suburban kid screamed about dating, inner feelings or some acceptance crap. Now, you can twirl till your heart’s content and the only one who twirled more than me was Toy Bomb’s Cole Barnson (guitar vocals, percussion, minor sink repair, and bass). My nine-year-old, Samuel, would have been jealous of his energy and the former SLC indie band rocked hard that Saturday. The other member of the band, Brandon McBride (guitar, keyboards, vocals, bass, percussion, bass, percussion, fashionable beanie wearer and effects guy), stayed on the keyboards for most of the night and some Provo locals filled in the remaining gaps (side note: random bassist guy who’s name exists outside of Google or writing against my knee, you are awesome). After their set, McBride stood to the left of me most the night and in a moment of awesome male bonding asked me, “Could move your head a bit?” Bliss barely personifies these types of moments, and in true rocker fashion, I responded, “Uh, yeah, sure whatever.” He was way impressed.

The lights finally went down, as they often do before headliners and vigorous bowling competitions, and The Moth & the Flame welcomed everyone to their show. Little girls screamed and pats were received on several backs. This was a non-alcoholic show, so the pats were about as intense as the well wishing became. With just one full-length and an EP under their belt, they asked the crowd if anyone wanted to hear any new music. Everyone seemed OK with this so after songs like “Sorry” and “Lullaby,” they launched into new territory. “Silver Tongue” eventually showed up and I believe I even joined the screaming girls for that one. At the end of the night everyone made their way out and I took in the final scene once more. The floors of post-concert halls are littered with little oddities, all baring reference to something once treasured. Ticket stubs, T-shirts, and a pair of over-fashionable ‘80s sunglasses cover the once bustling event. There’s melancholy made in the most random corners of life. Thank you, TMTF, for finding such a corner and passionately sharing it with us that evening. Welcome back to the States. You were sorely missed.