00:00 / 16:39
Spotify Stitcher
RSS Feed
Share
Link
Embed
Powers leaned into the microphone and said, “Did you think we could leave without playing ‘Young Blood’?!” as Xayalith said, “We just like teasing you!”—I knew it!

The Naked and Famous @ The Depot 05.26 with Strange Babes, White Sea 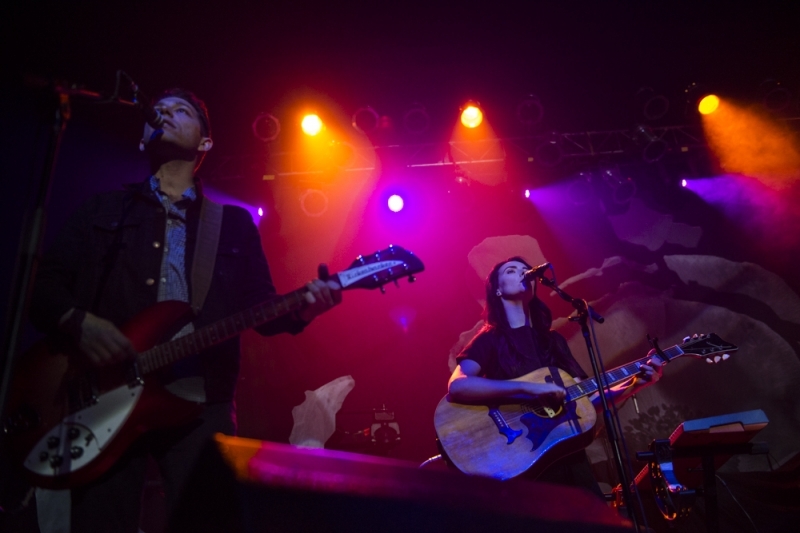 In the spirit of Memorial Day, I walked, stuffed with pizza and beer (as usual), by the crowd of teens to the end of the line. I felt slightly old. It was nearly 7 p.m. and it’s safe to say The Naked and Famous brought good weather and good vibes with them.

Shortly after 7 p.m., the lines were moving and anticipation was growing. We headed up to the second floor, grabbed (more) beer, and settled in some seats to the right. I listened to the chatter grow louder as people filled seats and space on the first and second floors of The Depot. I made some “concert friends,” whose names I couldn’t entirely hear over the pre-game music. If you guys read SLUG (and you better), what’s up! Finally, the lights fell dark and Strange Babes took the stage.

Strange Babes had the crowds clapping and jumping the whole time. I spoke with Aaron Short from The Naked and Famous before the concert and he said Strange Babes are ”Really really good friends of ours that have just started up a new band.” If you weren’t at the show, you can cruise over and check out their track “Holiday” on Bandcamp . Their music and energy was contagious, including a rendition of “Happy Birthday” to their drummer with the crowd singing along. At times, you could feel the sound waves reverberating off the walls—in a psychedelic kind of way; the stage was lit with blues, purples, and greens. They created the best of both worlds by incorporating the bass, and both hollow body electric and acoustic guitars—shaking things up with a tambourine. Their performance ended way too soon, but with a bang. They are a band I definitely want to see headlining a show in Salt Lake City sooner rather than later.

White Sea followed the hard to beat rockers. Morgan Kibby is the force behind White Sea. She formerly toured with M83, eventually starting her own solo project. The atmosphere changed when she came on stage, the lights still focused on the stage. There wasn’t as much foot tapping, but a lot of astonishment—White Sea was hitting sopranos all over the place, she kind of reminds me of a more electronic Florence + The Machine. Her music took the tempo down, leaving the majority of the work to be done with her voice. Just when I thought things were totally slow, she let the beat build, dropping it in an electronica way, with solos on the electric guitar. There’s no doubt she has raw, beautiful talent but, in my opinion, Strange Babes takes the win.

Both openers were great setups for The Naked and Famous. Each band brought different musical and performance-like qualities. A rock element: drums, guitar and keys, while also dabbling with electronic sounds: dubbing, reverb, etc. With that being said, it’s pretty obvious by the time White Sea was off-stage people were breathing anticipation. Around 9:30 p.m., apparently chanting The Naked and Famous was too hard to synchronize, and the floor crowd started chanting, “USA! USA! USA!”—maybe it was a Memorial Day thing. By this point, I was getting restless. Where are they?!

The venue rolled in black; I’m surprised no one passed out for screaming so long and loud. Alisa Xayalith, Thom Powers, Aaron Short, David Beadle and Jesse Wood took the stage tailoring their set to their obsession with black and white—white lights, black clothes and what seemed like hanging shapes of New Zealand lit up in blue. Powers and Xayalith were in the front, Short, Beadle, and Wood scattered behind them. They were spread out, leaving each his/her own space to embrace the atmosphere of a sold out show and the crowds that pushed forward cheering when they started playing “A Stillness,” the first track on their new album, In Rolling Waves, immediately transitioning into “Girls Like You,” from Passive Me, Aggressive You, which everyone knew the words to. Following, they played “Hearts Like Ours,” from In Rolling Waves. The Naked and Famous had a balanced performance between old and new songs.

At this point, everyone on the top floor of The Depot was leaning forward, while the crowd on bottom floor was pushing as far forward as possible. Everyone was clapping and reaching their fingertips trying to touch Alisa. She was at the edge of the stage, in a black flowing dress, just inches away from the crowd, clearly in the zone, teasing a touch to the front-rowers. Eyes closed, and swaying back and forth, looking fabulous in her bright red lipstick, she sang out, “We’ve yet to dream, we’ve yet to dream, all time and energy.”

Xayalith stopped to talk to the crowd, thanking them for coming, making one request, “This song sounds better with lots of people singing along,” she said. They started “Rolling Waves,” the drums at first, with everyone gently following. The crowd knew most the words, but when it came to the powerful moment of the chorus, each band member was in their own world. Their chemistry is like the wave they sing of; they perform so naturally together. They sound great on record, but even better live. When they got into it, so did the crowd. Together, everyone was singing, “Like rolling waves.” I wouldn’t be surprised if were heard for miles, because everyone at a sold out show singing those three simple words gets pretty loud.

You could really tell The Naked and Famous were throwing all their energy into the show, constantly moving up and down, sweat dripping! Before slowing things down with “No Way” they played “Punching in a Dream." This is one of their more popular songs, so things only got louder. Xayalith turned the microphone to the crowd, encouraging them to sing the chorus on their own. As hundreds of people sang, “Way-yay-yay-yay-yay/ I don’t ever want to be here/Like punching in a dream breathing life into my nightmare,” there was nothing but satisfied smiles plastered on the faces of The Naked and Famous. The smiles stayed all the way through, “Passive Me, Aggressive You.”

The band walked off stage, leaving the crowd to their chant, “Young Blood, Young Blood!” After a few minutes The Naked and Famous walked back on staged. Powers leaned into the microphone and said, “Did you think we could leave without playing ‘Young Blood’?!” as Xayalith said, “We just like teasing you!”—I knew it! They maintained their efforts to tease by not playing “Young Blood,” but instead Thom and Xayalith broke out in “The Mess,” sharing vocals in front of the red lit background.

Finally, it was the moment most everyone was waiting for: “Young Blood.” Everything just felt right at this point, and you couldn’t help but take a moment to take it all in—what a perfect show. I wasn’t entirely sure if I was at a concert of a light show, though. There were lights flashing fast, and everywhere. It was like a strobe light, just catching glimpses of fingers moving on the keys and electric guitar, watching The Naked and Famous throw every last bit of energy into this song. The lights went down, and it seemed like the song was over, but with much resistance. A few seconds went by and the stage lit up in bright lights again, for one last round the whole place started jumping and sang, “The bittersweet between my teeth/ Trying to find the in-betweens/ Fall back in love eventually/ Yeah yeah yeah yeah.” And like that, it was over.