00:00 / 20:24
Spotify Stitcher
RSS Feed
Share
Link
Embed
I always say that women make better punks than men, or at least I do now. Just ask Patti Smith. Or ask her doppelganger Becky Black, the lead singer of The Pack A.D., a two-piece garage rock outfit from the ‘Couve. This band is chained to The White Stripes on every website they’re featured on, but I don’t see it. In fact, the only thing they have in common that I can see is a female drummer. 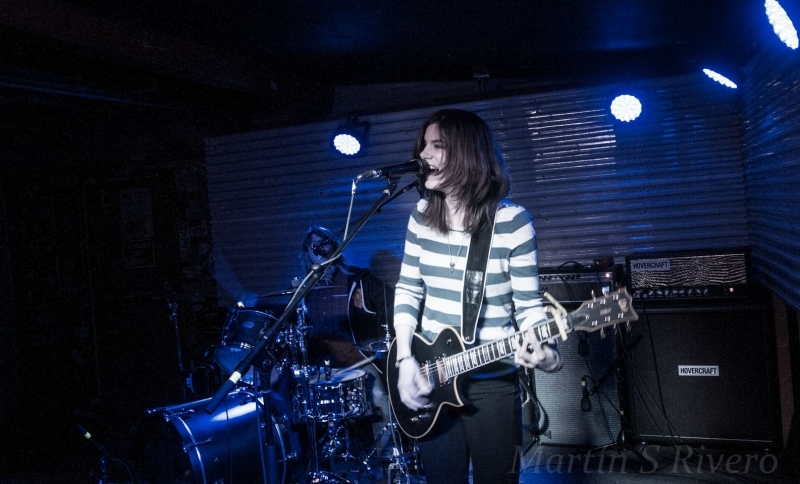 My working on Valentine’s Day was deliberate. Not wanting to succumb to the pressure of a blind date and not willing to subject myself to a night out searching in vain, I decided to remove the obligation entirely and instead sweat it out at Kilby Court with the rest of the lonely. It ended up being the right choice even if I did end up going out after the show. It’s not that I care about Valentine’s Day. Quite the contrary, actually. I just don’t like being reminded that I’m alone. Who does? Music usually cures my anxiety, though. That must be why I enjoyed this show so much.

Super Moon, a fairly young band still in embryonic form but can still kick just as hard as the rest of ‘em, emerged tonight as a band to keep an eye on. There’s something about their take on college rock that excites me. They’re like a cross between Dinosaur Jr. and Built to Spill, meaning the angular guitar work was the main highlight of their sound. It’s exciting to see a band with potential in such an early form. How cool would it have been to see The Quarrymen play in England in the late ’50s, before they evolved to become The Beatles? Not that I’m saying these are the next Beatles. Far from it actually—they’re just a good band with an interesting sound.

Anyway, they play a few interesting songs that remind me a lot of some old J. Mascis, after You’re Living All Over Me was released and before Pavement, back when those angular guitars were also so gritty, truly in ’70s FM fashion. They end their set peacefully with an “outro,” their version of a set-ender, and as the crowd exits I fecklessly take a seat in back where I can scribble in my notepad. Not that I’ll be able to read any of it the next day. It’s dark in here and I might be writing over myself, making everything illegible. I have to write everything down, everything I see, or it’ll be gone the next day like it never happened. I should really drink less.

Maybe Dead Tooth should, too. They came on stage not soon after Super Moon departed, dressed in capes and full L.A.R.P. gear, a gag that fit their overall style and chemistry on stage. I get the feeling these guys don’t take themselves too seriously, which is a fantastic quality to have in a band. It’s why The Frogs are the greatest band in the world and why Lars Ulrich is basically a shit person. These guys really do have a lot of fun on stage, mostly due to their self-deprecating and sarcastic keyboardist/guitarist who remains sitting for most of the show, taking the Paul Shaffer role for the night. I don’t know many people who would want to be compared to P.S., but it fits him well.

The lead singer, a cross between the lanky Alison Janney on the West Wing and Beiber before he cut his hair and started being awesome, dwarfs the rest of the band. They have charisma, that’s for sure, and they sound a lot like The Feelies or possibly Nodzzz, two proponents of math rock. At times they lose focus and entire songs can sound fractured, like six different songs at once—they aren’t sure what direction to take, but they inevitably go down the same paths. I still loved the set and would recommend them to most people.

After their set ends, SLUG photographer Martín introduces himself and he agrees they played a fun set. I saw him during the set one-handedly shooting the band because of his broken arm, looking more akin to a war photographer than a music photographer. It looked like a struggle and his arm reminded me of Henry Rowengartner from that shitty Gary Busey movie, Rookie of the Year. Give ‘em that stinky cheese, Rocket. You can check out more of his photos here.

I always say that women make better punks than men, or at least I do now. Just ask Patti Smith. Or ask her doppelganger Becky Black, the lead singer of The Pack A.D., a two-piece garage rock outfit from the ‘Couve. Oh, Canada. This band is chained to The White Stripes on every website they’re featured on, but I don’t see it. In fact, the only thing they have in common that I can see is a female drummer. They don’t have the same bluesy influence that informs The White Stripes. No, I think they sound a bit like Big Black.

Seriously, as someone who will listen to Songs About Fucking on repeat for hours, that’s kind of a big deal. True, they never play a song as good as “Kerosene” or even “Bad Penny,” but they sound just as jaded and resentful as Steve Albini.

Their set does seem a little rushed. After every few songs, the drummer, out of breath from the previous song, quickly talks for 15 seconds (thanking the crowd, plugging merchandise, etc.) and they get right back playing barely leaving any time for the crowd to catch their breath, let alone themselves. It’s just the fast-paced nature of the band, and I kind of like that. Some bands act like Wayne Newton, chatting away with the crowd between every song and throwing all their momentum out the door.

They play a bunch of songs from their latest release, Do Not Engage, and a Cramps song, too. And thank god it was “I Was a Teenage Werewolf.” It complemented their sound well. They turned it into a straight rocker instead of a campy, kaleidoscopic freak show. I prefer the freak show, but this was still fun.

Speaking of The Cramps, I think Poison Ivy would be a very good addition to The Pack A.D. Her bass and big hair would really fill out their sound. Not that they really need it. I like the stripped down, trebly but fierce sound they conjure together. Maybe this should be a tradition—every Valentine’s Day I’ll blow my eardrums out at some show, it doesn’t matter which one. Or maybe I’ll just get a girlfriend.