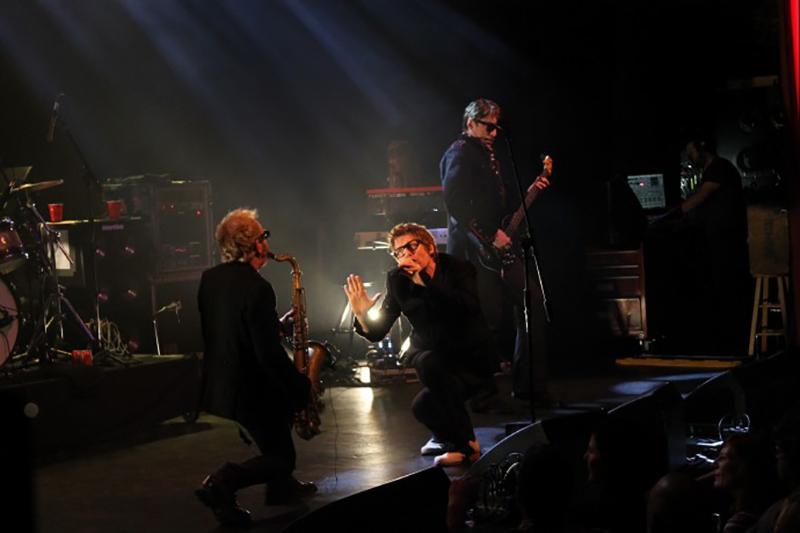 A sizable crowd has made their way into the Rockwell, the big box theater at The Complex. The night begins with Dear Boy, a jangle pop band from Los Angeles who channel 1991 in the most persuasive of ways. If I hadn’t been so impatient for what was yet to come, I would have paid closer attention.

There’s something electric about a James concert. The energy precedes their appearance; you never know what they might play.

The first time I saw James was in London’s Finsbury Park in 1996. They were headlining the Fleadh Festival with the likes of The Corrs and Sinéad O’Connor. It was three days before my 20th birthday and my youthful exuberance had me arriving early to secure a place on the rail, right up front. I didn’t move for 12 or 13 hours. I can’t find a setlist, but the night was euphoric. It wasn’t heatstroke—that I can assure you.

This would be the fifth time I was seeing James, but only the second time in America. I took a brief peek at some of their recent setlists and the inclusion of “Just Like Fred Astaire” in Chicago’s set had me excited for the possibility of hearing something from 1999’s Millionaires album.

That would have to wait, though, as the first four songs are all pulled from more recent releases beginning with “Nothing But Love” from 2016’s Girl at the End of the World. The band’s latest release, Living in Extraordinary Times, is introduced with “Extraordinary Times” and “What’s It All About.” These are followed with “Interrogation” from 2014’s La Petite Mort.

In just four songs, we’ve already been treated to a bit of folk, electronic-laced rock and shoegaze punctuated by Andy Diagram’s trumpet playing. For those unfamiliar with the band’s extensive back catalog, the ever-changing face that is James might be a little bewildering. I wouldn’t know how to classify them. They aren’t exactly avant-garde (their choruses are far too friendly for that), but they don’t fit comfortably into any genre, let alone a subgenre. There’s Tim Booth’s vocals, but his voice is as difficult to describe as his frantic dancing.

“Sometimes (Lester Piggott)” is the evening’s only visit to 1993’s Laid. A wonderful song off of a remarkable album. Many in the audience would have been happy if the band played the entire album from front to back, but that’s not James.

We return to the new record for “Hank,” a drum-heavy, distorted drone of a song that finds Booth at his most political.

“Why put your faith in facts when you can lie?”

It’s a bitter pill to swallow, but the message is on point and delivered with a sense of purpose. It’s bleak, but there’s something beautiful that emerges halfway through.

The band then played “Hello” from Millionaires. It’s a melancholy song carried primarily by the interweaving of vocal and piano. Frankly, it’s one of my favorite songs and I never expected to hear it live.

Le Petite Mort’s “Walk Like You” builds into 2001’s anthemic “Getting Away With It (All Messed Up)” from Pleased to Meet You.

Next up is “Leviathan,” a gorgeous ballad from the new album with lyrics that will never allow it to be played on traditional radio.  With “Sound,” we travel back to 1992’s Seven before the set closes with “Many Faces,” a song that should be too earnest to work with its chorus: “There’s only one human race / Many faces, everybody belongs here.” Somehow, it works live in a way that the album version doesn’t quite convey and the entire room is singing. Hopefully, the crowd believes in the lyrics just as much as Booth does.

There are shouts for more, but the crew clears the stage to make room for The Psychedelic Furs.

Shut Up and Play the Hits!

I’ve seen the Furs more times than I can count in a variety of Salt Lake and Park City venues. I believe I’ve only missed one of their dates in Utah since first seeing them touring the World Outside album in 1991. Add in Love Spit Love (vocalist Richard Butler’s side project with guitarist Richard Fortus from the ’90s), and the number of shows goes even higher.

Unlike James, The Psychedelic Furs tend to focus on their major hits and cuts from their first five records, released between 1980 and 1987. 1989’s Book of Days and 1991’s World Outside are often ignored entirely. If you hear “House” or “Until She Comes,” it’s a rare and wondrous night.

The band is still enjoyable, but there isn’t a lot of guessing when it comes to what they’ll play. They sound great, but are limited by their lack of spontaneity.

The setlist at The Complex features hits like “Love My Way,” “The Ghost in You,” “Highwire Days,” “Heaven,” “Pretty in Pink” and “Heartbreak Beat” along with deeper cuts like “Mr. Jones,” “Sister Europe,” “Into You Like a Train,” “President Gas” and “India.”

There are, however, two surprises. The first was “The Boy That Invented Rock & Roll,” a new song that Butler says is from their next album. This might not seem like a big deal, but since 1991 the band has only release one new song, 2001’s “Alive (For Once in My Lifetime).”

The second surprise is “Sleep Comes Down,” with Andy Diagram from James adding his trumpet into the mix.

It’s a good night. Those who came in search of greatest hits likely preferred The Psychedelic Furs, but I was partial to the more adventurous James.

Somewhere Out in the Dark: The Psychedelic Furs with The church @ The Complex, 7.29
Star Chaser: The Church return to Salt Lake City to celebrate 30th Anniversary of seminal album Starfish