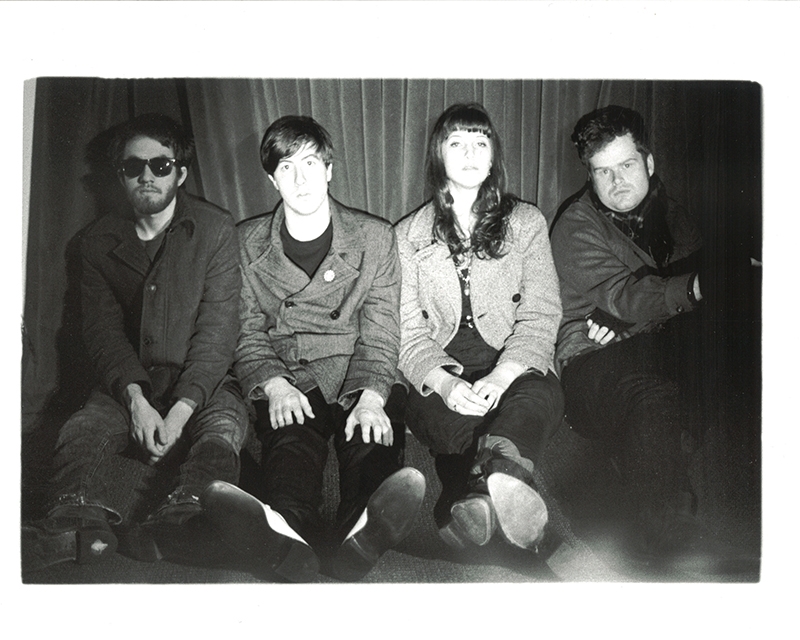 “Everything about The Shivas just screams, ‘We’re here to play some music!’ and nothing less.” Photo: Adam Blackman

The Wednesday before Halloween, I found myself at Diabolical Records for the first time, surprised by the tiny crowd. I arrived promptly at 9 p.m. and could hear the first note struck from the alley, as Salt Lake’s Super 78 had taken the stage and began play. From that first tune I heard from the alley, I knew I was going to dig this band. So, I stepped inside the shop and was caught off guard by the crowd composed of less than 20 people. I instantly thought, “This is the show for me.” My thoughts on the venue, if you can call it that, were interrupted when I came to, and remembered why I was there. There stood Cesar Reyes, Super 78’s manager and singer/guitarist, belting out the vocals as he plucked the strings of his beautiful Gretsch guitar. I’ve always admired anyone with the ability to sing and play guitar, and sing and play guitar Reyes did. As I continued to watch Super 78 play, I couldn’t help but notice drummer Charles Samuel’s machine-like banging on the drums. It was apparent that his internal clock needed no tuning—Samuel was on point. It was his mannerisms while playing that lead me to call his style “machine-like.” His body moved to the beat that he was producing, while his mind was wherever it wanted to be. His drumming intrigued me, but I had to pull myself away and take note of the rest of the band. While keyboardist Drew Workman mostly kept his back to the crowd and Devon Leon Ridd calmly played guitar, it was Kai Ikari on bass who kept the theatrics up, moving and grooving with some killer bass lines. Super 78 really put on a great show. They kept their setlist somewhat short, and I was definitely left wanting more, but The Shivas, hot off releasing their fourth LP, were to follow, and I was ready for it!

With their new album, You Know What To Do (released just a day prior to the show), The Shivas came on to display some of their new work. Let me start off by saying that The Shivas know how to put on a show. They looked good on that stage, and the music seemed to come out effortlessly. I’ve been listening to You Know What To Do non-stop lately, so I was pretty damn excited when I saw The Shivas were about ready to play. Standing only a few feet from guitarist Rob Mannering, I was entranced when they started to bang out their first tune. Though I was unfamiliar with the first song, I quickly perked up when they started playing the opening and title track of their new LP. A majority of their setlist consisted of tracks from this new album, and by the look of the small crowd, it’s going to do just fine. The main aspect I noticed at the show was The Shivas’ drummer, Kristin Leonard. Never have I seen someone slam so hard on the drums, and slam well might I add. Not only did she play the drums well, but she had an even better voice, which harmonized oh-so-well with that of guitarist and lead singer Jared Molyneux. I already stated how I feel about guitar-playing singers, but drum-beating singers? I don’t know how you do it, Kristin.
At some point during the show, when they played a song I had listened to more than the others, I realized how fucking good they sounded live. Despite some minor rattling due to the confined space, the band sounded perfect. Not only did they sound great, but as I mentioned before, they just looked good doing it. I’ve expressed my feelings on the drummer and guitarist—now let me move over to Mannering, whom I stood next to all night. You could really see the passion he had as I watched him strum his guitar and dance accordingly. That bassist, though—don’t even get me started on him. Eric Shanafelt is an absolute master on the bass. I play a little bass myself, so it was only natural that I felt a little envious as I watched him casually finger those bass lines. Bassists always seem to get the least attention of all the band members, always tucked away to the side of the stage. For me, this was not the case. I’ve studied those bass lines since I first heard The Shivas, and it amazed how me how he jammed them out.
Throughout their entire set, I think The Shivas stopped between songs for 20 seconds at most, which I really liked. As soon as the crowd began to clap after each song, the band had already started the next on the list. It really kept the show moving and left no time for any of us to fall out of the trance that they had put us in. Everything about The Shivas just screams, “We’re here to play some music!” and nothing less. From their almost-non-existent breaks between songs, to the cardboard box the microphone stood on, we knew they just like to make music—and we like the music they make! If you can take anything from this review, it’s that The Shivas fucking rock and they put on one hell of a show, regardless of its size—a job well done.
Photos: