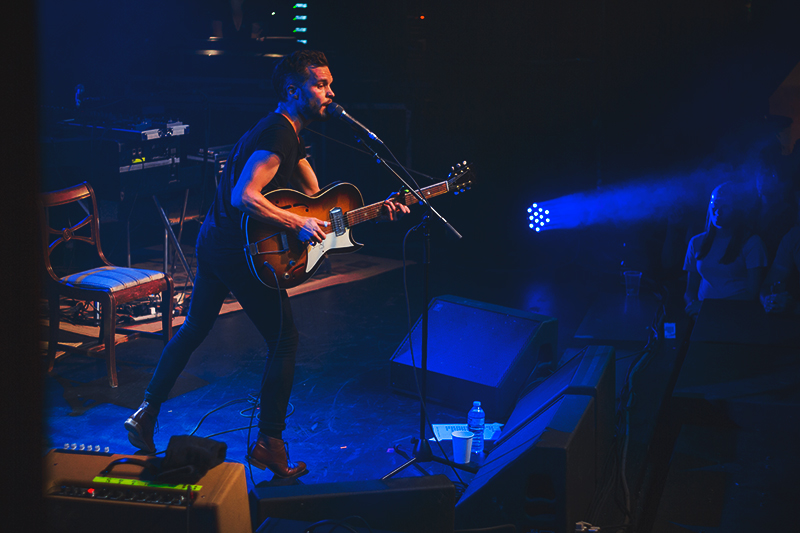 Deciding to practice his dance moves on stage, Kristian Matsson of The Tallest Man on Earth gets his groove on as the music takes over. Photo: Talyn Sherer

The Shortest Girl At The Tallest Man On Earth

Aly Spaltro, or Lady Lamb of Maine (formerly called Lady Lamb the Beekeeper), opens for Tallest Man On Earth. She has as much vocal strength as Mattson with a punkier rawness, but came onstage rather quietly, saying nothing and just picking up her electric guitar. She surprised the almost-full room with her DGAF attitude, powerfully closing her eyes, head swinging, and sang, “I’m a ghost and you all know it / I’m singing songs and I ain’t slowin’ / It was a fragile thing and I goddamn dropped it / I picked the pieces up and put them in my pocket.” Grungily dressed in black, she sang that she is “as blue as blood,” and to “twist your hips / crane your neck” in a catchy, electro-tune titled, “Crane Your Neck.” A one-woman show, she captivates the crowd, somewhat Cat Power–sounding but with a much sharper edge. Ms. Lamb sets the stage under cotton-candy lights with few words outside of song, but left the crowd alert and anxious.

10:07 p.m. creeps on to the clock, and the stage lights with red-and-white, black-shadowed figures jump on the stage, as excited as the woo-girls and guys in the crowd. Matsson takes the stage with background help on the bass, guitar, brass instruments and synthesizers. Showcasing his new album, he opens with the first track on Dark Bird, “Fields Of Our Home,” which dropped a few months ago. Dark Bird is slightly less folk, with more piano and frequent yet subtle synthesized effects.

His second song, “Slow Dance,” is an upbeat track about the strangeness of being a stranger. At this point, the audience’s movement is growing and pleasant. He stops and thanks the crowd, one of many times, for listening. He attests to never having been to Park City, having quit snowboarding just before the Olympic Games. “But I guess I made it!” he smiles, cuing woo-girls. He chooses “1904,” a well-known song among fans and semi-fans. Even the bartenders were dancing while pouring drinks. Even previously grumpy-looking men were smiling.

Matsson is definitely a treat to see live, even though “seeing” was really mostly just “listening” because it seems that all the tallest men on earth showed up, though I did see frames of Matsson swimming side to side across the stage, with his fish-strap hangin’ his guitar around his neck. He switches to a hollow-body electric guitar for “Singer” off Dark Bird, and before drifting into another new album song, “Darkness of the Dream,” he pauses to assure the crowd, “This is not about my grandfather. It’s about me making mistakes.” He moves, easily and joyfully stomping around, before bringing the tempo back down, playing “Super quiet,” he says, “so only dudes up front can hear if you don’t shut up.” The chatty fuckin’ Cathies half-silence, enough to listen to the chilling acoustic song, “Love is All,” from the album Wild Hunt (2010), and Matsson is a single, centered figure behind the colorful smoke that wove between beams of light.

He plays “The Gardener,” a dancing song, and “Sagres” with a 12-string guitar. He sings, “With your hands in mine / Little scream into the wonder”—pause—“and a wild set of rides,” before flowing into a contagious dancing tempo—“Come on!” The night is up and down; Matsson has a way of playing happy songs and happy-sounding sad songs that still make one happy.

Matsson interjects between shouts to “Shut the fuck up!” with a simple, “Hey, you don’t have to do that. Let’s just listen to a really sad song together,” and plays “Revelation Blues.” Matsson plays almost every track on his new album Dark Bird, moving to the piano (forced to be in one place for an entire song for the first time all night) for “Little Nowhere Towns.” The crowd appears to be satisfied with whatever he plays, even if they’re new and unfamiliar. Instrumentally and vocally, just standing and listening to The Tallest Man on Earth is aesthetically pleasing. Back to the strings, Matsson explains a miscommunication that turned into a song four years later, and utters the words, “I never knew I was a lover,” from the well-known song, “King of Spain,” before waved goodbye, leaving the stage and the crowd in awe.