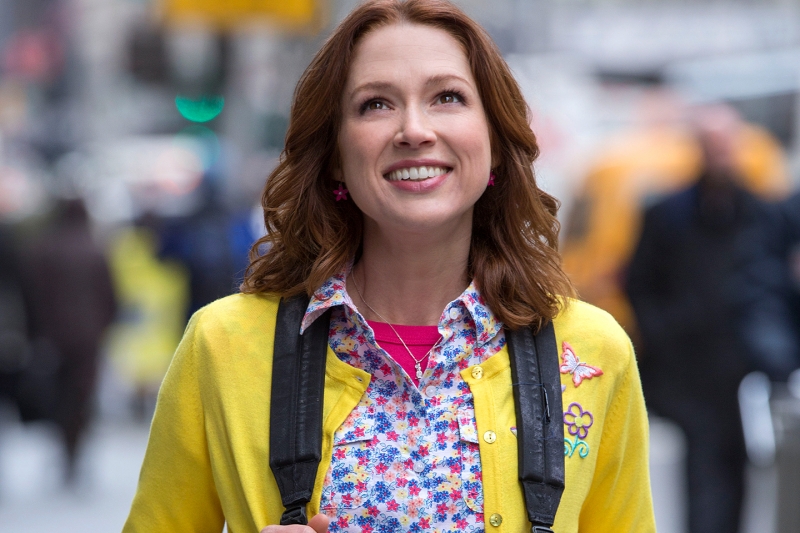 Mark my words: Everything Tina Fey touches is magical. She is the Fairy Godmother of comedy, and her newest Netflix exclusive is no exception. From the cast to the music, The Unbreakable Kimmy Schmidt stands up to its name and is a solid, feel-good comedy. The 13-episode series explores some very dark subject matter in a way that leaves you believing in the resilience of the underdog.
The story opens with four women in conservative, hand-made garments singing about the apocalypse in a bunker. Their sing-song explanation of why they believe the apocalypse has come upon them is that they are “so dumb.” Then, a bang at the door, and a SWAT team comes flooding in to rescue them. Kimmy (Ellie Kemper) greets the sunlight with a beaming smile that she survived the apocalypse and everything is still out there. We learn down the road that Kimmy was taken as a teenager from her yard by a cult leader, along with her other three captives. While the four women get a taste of fame on the talk show circuit speaking about their ordeal, Kimmy gets a taste for New York City, and she doesn’t want to go back to her small town in Indiana.
This is the kind of show you can binge-watch without guilt. From the first episode, the wit grabs you and the bubbly Kemper (“The Office,” “Bridesmaids”) keeps things fresh. Right off the bat, the auto-tuned news theme song sets the stage that these females are “strong as hell.” As the cast of characters are introduced, die-hard comedy fans will squeal at the supporting talent. One of my personal all-time favorites, the legendary Carol Kane, plays the nosy but well-intentioned landlady Lillian Kaushtupper opposite Kimmy’s new roommate Titus (Tituss Burgess). Kimmy Schmidt quickly finds employment with the helpless and clueless Jacqueline Voorhees played by Jane Krakowski who, to my utter delight, is essentially reprising her role from 30 Rock as a high-maintenance and out-of-touch woman clinging to her youth. The supporting appearances add to the roster, with Jon Hamm showing up as the smooth-talking cult leader Richard Wayne Gary Wayne, and Tina Fey as the horribly incompetent lawyer sent to prosecute him for the kidnappings. Rounding out the amazing cast are additional comedic powerhouses in guest appearances: Martin Short, Horatio Sanz, Amy Sedaris, Nick Kroll and Matt Lauer to name a few. Every character holds their own, and every storyline could be their own show from Titus’ job hunt foibles and costume choices, to Jacqueline’s “foot slut” failed marriage.
While seeing the world through Kimmy Schmidt’s innocent eyes, the series tackles some very tough subject matter in a naïve but straight-forward way. Not only does it deal with the kidnapping and brain-washing of four women, but we also watch Kimmy struggle through the Post Traumatic Stress Disorder-like symptoms of her ordeal. She doesn’t let things like people sneaking up behind her (and her subsequent ninja skills), or her irrational fear of Velcro stop her, but it does leave the people around her wondering about her past. Outside of Kimmy, her fellow characters deal with very real world topics like immigration, poverty, street harassment, dealing with infidelity and peer pressure to do drugs. This is played off in such a realistic and funny way, and never feels like you are watching an after-school special or one of those Full House episodes where the kids had to learn a tough life lesson. Jacqueline struggles with finding her identity as she goes through the first stages of divorce and breaks her bounds of co-dependency. Her character is much deeper than “ditzy blonde New York City housewife,” as you find out that she actually was a rebellious Native American teenager who ran off to the big city.
What I found the most impressive were the vast range of characters that you may not typically see on a network TV sitcom. You’ve got a strong supporting lead in Titus as an African-American gay man, Kimmy’s love interest is Asian-American, and her other strong-willed former captives do not include women who are traditionally seen as brainless sex symbols, like Donna Maria Nuñez (Sol Miranda). The theme of willpower and sisterhood are woven throughout, without shoving a pair of “traveling pants” down your throat. Kimmy Schmidt makes you want to overcome, persevere and bring neon pants back.
It’s nearly impossible not to watch this whole series in one sitting, and the second season hasn’t even been confirmed yet. The buzz for The Unbreakable Kimmy Schmidt is still on the rise, spreading by word-of-mouth faster than any other online series. This is a show that is edgy enough even for the most hardened pessimist and still happy enough to watch with friends or family. It remains truly “Unbreakable” while sneaking in a strong dose of non-traditional characters and feminist themes that any boyfriend or husband will gladly sit through. I recommend spending the time between this season and the hopeful next installment by watching this over and over again until all of the “feel-goods” are absorbed directly into your soul.
Photos: