SLUG Mag Soundwaves
Episode #403 – Mykah
00:00 / 21:59
Spotify Stitcher
RSS Feed
Share
Link
Embed
I stepped out of the car onto a quaint street tucked away in a quiet corner of Glendale. No large vans or trailers were in sight. “This can’t be the right place,” I thought to myself as I searched for familiar cars perhaps belonging to my friends whose bands were performing that night.

Tolar and Steel Bearing Hand Rock the House Down with Revolt, Deathblow, Discoid A and... 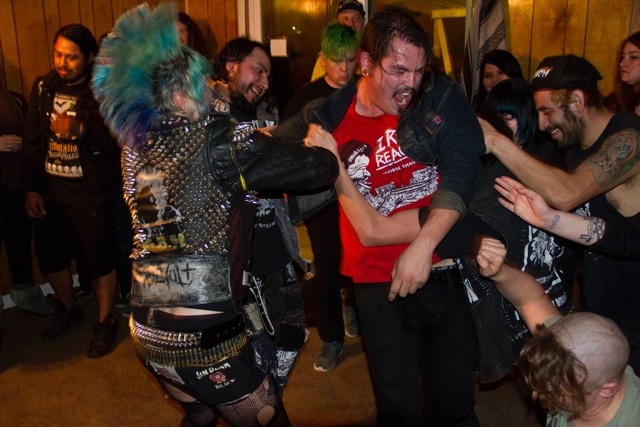 Monday’s house show was full of dedicated supporters thrashing to underground music. Photo: Madi Smith
I stepped out of the car onto a quaint street tucked away in a quiet corner of Glendale. No large vans or trailers were in sight. “This can’t be the right place,” I thought to myself as I searched for familiar cars perhaps belonging to my friends whose bands were performing that night. Looking around, I noticed a half pipe in the backyard of the house I was standing in front of, surrounded by a mass of patches, spikes and brightly colored hair. As I crept in to the backyard of this seemingly unordinary house, the distortion of a guitar amp faintly graced my ears. This was indeed an excellent location for a house show.
The glass door just off the patio slid open in front of me to reveal local two-piece punk band Steve Buscemi warming the crowd up for a wild night in a wood paneled living room. Drummer Althea Best pounded away as Discoid Sam yelled and thrashed on vocals and bass. A semicircle formed in front of the band as Conrad Callirgos of Discoid A threw himself around the room, smashing bodies into the wall. Steve Buscemi’s songs were not long, some only lasting about 15 seconds. Appropriately, their set was quick and the Monday night crowd’s enthusiastic reactions led me to believe the band never overstays their welcome.
A few skaters took on the half pipe as some people sat on the ground enjoying the last warm rays of sunshine between sets. Salt Lake City noisecore band Discoid A turned up the heat with an even wilder display of thrashing around the room, instruments be damned. With Raunch Records owner Brad Collins on drums, Callirgos on guitar and vocals and Discoid Sam doing double duty on bass and vocals, the crowd grew in numbers and in ferocity. The room was now too full of sweaty bodies to maintain the semicircle and few were safe from the assault of flailing limbs. A handful of people managed to obtain a collision-free spot atop a stair leading into the kitchen beneath an American flag. Like Steve Buscemi, the majority of Discoid A’s songs were less than a minute. Luckily, they had enough material to satisfy the rowdy fiends in the audience.
After Discoid A dropped their instruments, the crowd moved outside to escape the heat emanating from hot flood light in the corner of the room. Set up and take down time seemed fly by with the abundance of conversation to distract from the minutes passing. I’ve never been so hesitant to use the bathroom out of fear for missing a band’s set than at this show, nor have I ever seen such a clean bathroom stocked so full with toilet paper. Dive bars could learn a thing or two from this stand-in venue.
Local street punk band Revolt held the third spot on this packed bill. Vocalist Kay Kaos’ lyrical praise of beer was greeted with fervor and the crowd took it upon themselves to ensure her hands were never empty. The intimate interaction between band and audience was exciting and brought the energy to a new level. Revolt performed their tour tale tune, “Shitty Car,” to plenty of moshing and beer spilling. Audience members sang along to songs such as “All About the Beer” and “Bored.”
As the show progressed, song length increased and the style turned toward the realm of metal. Enter Deathblow, Salt Lake City thrash metal. Building on the surge of energy from Revolt’s set, Deathblow’s fast jams had the room in frenzy. On multiple occasions, Holton Grossl’s microphone stand lay defeated on the floor from the frantic moshing, but he played on. Drummer Dan Alexander’s cymbal accents were distinct and well executed. Paul Lachica’s bass tone, accompanied by Grossl’s guitar tone, was loud enough to even out the mix with Alexander’s furious blasting.
Like the previous bands, Steel Bearing Hand—a death metal band hailing from Dallas, Texas—plunged head first into their music with little banter from the vocalist. The guttural growl of Wyatt Burton rumbled through the sweaty air as the single floodlight filled the room with uncomfortable amounts of heat. That didn’t dampen the party, however—the crowd raged on. Guitarist Parker Turney’s meaty guitar tone enhanced his precise solos. Matt Preston destroyed his drums (figuratively speaking) and his impressive speed played a hearty role in the aggression of Steel Bearing Hand’s music. The band performed multiple tracks off their new self-titled album, which was for sale only on vinyl, and they concluded their set with a Discharge cover.
The crowd maintained their energy and support through the last band Tolar, also from Texas. Vocalist Davo lathered his voice in reverb adding a twist to the band’s performance that was unlike the other bands that played. Periodically throughout the set he would be lost in the bustle of the rampaging crowd, or screaming while kneeling down. Burton from Steel Bearing Hand doubled as a guitarist for Tolar as well and lashed about as much as he could without damaging his guitar. In place of a merch table the band sprawled shirts, patches and cassettes across the kitchen stove and luckily avoided any burning catastrophes.
All of the bands’ raw sound blasted through their own amps, microphone and drumheads. Without a PA or someone working a soundboard to confuse the balance of the instruments, the music was solid and consistent and still loud enough to make your brain ache the next day.
The bill was a weird mash up of bands ranging from punk to death metal but the steady progression of musical aggression was a great lead up and the bands and fans stuck around to support the entire bill. The show ended at a respectful time of about 10:30 p.m. and had quite an impressive turnout, especially for a house show on a Monday night.
Photos: