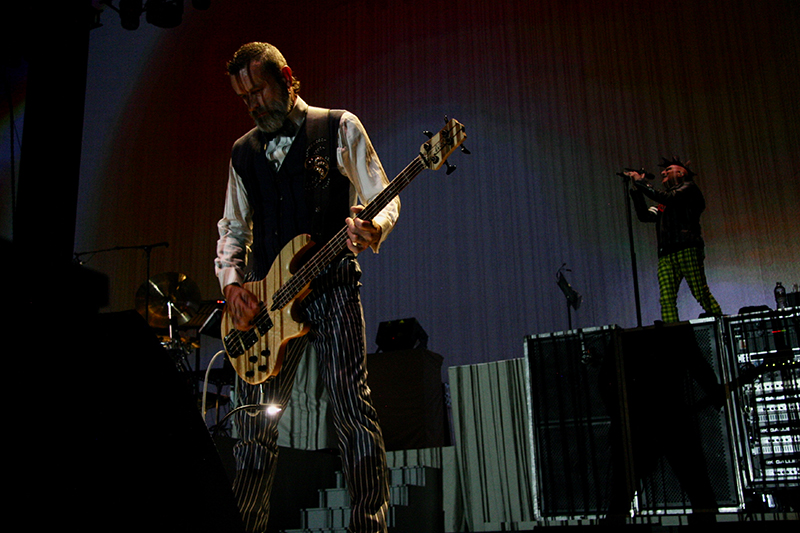 Like many Tool fans, I eagerly awaited the release of their latest album, Fear Inoculum. It was the first new music we’d heard from the band since 10,000 Days in 2006. Finding out their tour for the album would land in SLC, I jumped to the opportunity to review the show. Despite seeing some of Maynard James Keenan’s other projects—A Perfect Circle and Puscifer—a live Tool performance has always managed to evade me. I started listening to Tool when I was in middle school and my older brother got me into 1996’s Aenima. I was immediately drawn to their distinctive sound, which felt like a violent and heavy departure from the grunge scene I had been immersed in at the time. As I was a fledgling young drummer, Danny Carey inspired me to want to create insane fills and rhythms that shaped my own style for years to come. I’d waited a long time for this show, and with my photo credential and camera clutched tightly in my hands, I was wide eyed and eager for what I was sure would be a transformational experience.

Killing Joke opened up the show, and the band, who has been actively performing since 1978, played a lively show. Due to where I was (directly in front of the stage and then in the back of the arena), I really couldn’t hear well enough to do them justice here.

Tool opened up with the title track off of Fear Inoculum as the band was slowly revealed themselves to uproarious applause. I had one song to get as many pictures as I could, so I paced around the front of the stage snapping shots of guitarist Adam Jones, bassist Justin Chancellor and drummer Danny Carey, the last of whom wore a custom Utah Jazz jersey with his last name printed on the back. Maynard appeared on one of two large risers that sat on either side of the drums near the back of the stage, sporting a tall mohawk and checkered pants. The band and crowd seemed mutually excited to see one another—all 18,000 or so of us—and especially the four musicians on stage. Their typically massive sound rippled my clothes as I navigated the giant speakers at the foot of the stage, clicking away. As the song ended, I was shown to my seat to watch the rest of the show, camera free.

Despite touring on the new album, they only played a handful of new songs. Instead, Tool spent the bulk of the show playing every song you wanted to hear: “Aenema,” “Schism,’ “Vicarious,” and “Stinkfist” were among the 14 or so songs performed throughout the evening, which included a four-song encore. Not to say we didn’t want to hear more of the new stuff, but the balance of their discography was spot on and emphasized the ageless and consistent style they’ve maintained over the years as they seamlessly played through this nearly 30-year span of music.

As the show came to an end and the overhead lights came on, the euphoria of the crowd was clear—we’d all had an amazing fucking time. I’m pretty sure I heard everyone within earshot utter just as much as we made our way to the exit. I wish I’d seen them sooner, and I hope to see them again, but for now it was worth the wait and I am happy in my newly transformed, post-Tool state. –Ben Trentelman