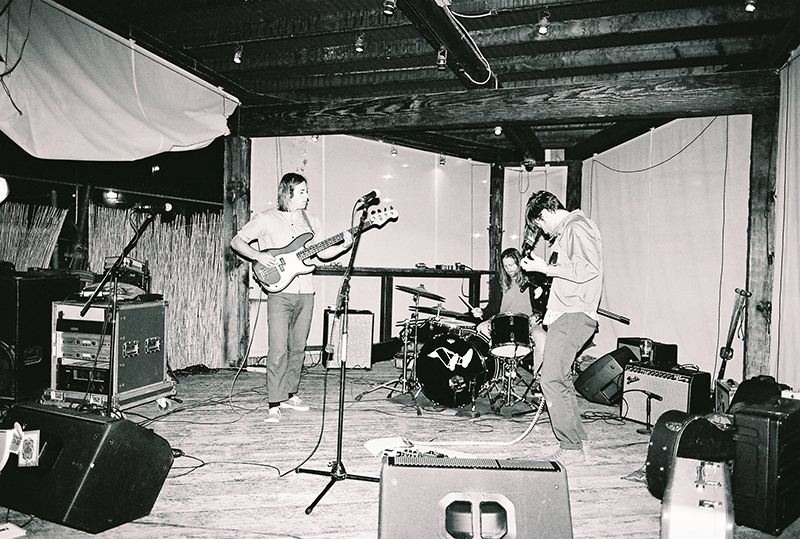 Skaters rejoiced this past weekend as Freckles and Travesura rolled into town, each band consisting of skate greats Josh Harmony and Leo Romero (respectively). The two bands played alongside local rockers Dark Seas, who closed the night out. Skate rat or no skate rat, Friday night’s lineup wasn’t one to miss.
Freckles opened the night up with some killer, surf-infused garage rock—no vocals! As a longtime fan of Toy Machine pro Josh Harmony and photog Grant Hatfield (ex-Toy flow), I’d been looking forward to this show for some time. Months ago, I saw these two masterminds had (loosely) formed a band, and I was instantly hooked. With the help of drummer Mike McMillin, Freckles plays some damn good surf rock.
I arrived at the show early and was just finishing my plate of chicken and waffles when I heard the first strum of a Freckles tune. I’ve had their album playing on repeat all week, and I recognized those songs, but I heard a Dick Dale tune in there, if I’m not mistaken. Dick or no Dick, Freckles ruled. Just as one would think, “This bassist is killing it,” Harmony handed the bass over to Hatfield and continued the set—a lengthy one, too. They seemed most comfortable in this formation, for the show only got better from there. At one point, Harmony charmingly spoke into the mic, stating the next song got its name from his son—appropriately titled “Boss Level.” I can relate to his 7-year-old son (similar minds), as the song moved into some heavy, almost eerie rock. Cue Bowser level. With their music screaming surf through and through, Freckles ended their set strong as their friends Travesura prepared to step up next.
Clearly, the term bro-style applies to all aspects of these dudes’ lives, as both bands participated in preparing Travesura’s set. Much like Harmony, Travesura frontman Leo Romero has been creating tunes for years. Since Cuates went quits, I’ve followed Romero’s music endeavors, naturally becoming a fan of his new band. Once they started, I felt like I was at a recent Bob Dylan concert with all that classic rock n’ roll rhythm, but without the sounds of Dylan gargling glass—I still love you, Bob! Backed by your everyday instruments and the occasional lap steel guitar, Travesura presented a sound I don’t hear much these days. I don’t know if it was the use of keys—or Romero’s voice and the harmonica around his neck—that brought me back to the Newport Folk Festival in ’65 (when Bob Dylan went electric). Whatever it was, Travesura made my night.
The first song simply rocked and led directly into the next—as if they need applause or time to readjust—and the rocking never stopped. I knew Romero could fucking skate, but I never knew he could make such fantastic music. One song after the next, I dug that shit more and more.
With a few entertaining stage antics, Romero and his band played a long set, yet not quite long enough, and some of the crowd finally got loose enough to get of their asses and dance. I’m not one to dance, but I had a hard time not doing so throughout that set. I can’t recall a slow or even mellow song in its entirety. By far my favorite of the night, Travesura put on a great show, and I hope to see more in the future. Next up, we have the closer of the night, and the crowd’s obvious favorite, Dark Seas.
Need I say anything about Dark Seas? I’ve only seen them a number of times, but I always know what to expect: a damn good time. I had almost lost faith in the crowd’s ability and motivation to dance when the band took their places and the music started. Within seconds the space in front of the stage became filled with booze-filled diehards.
Though still rock n’ roll, Dark Seas was quite the change of pace following Travesura—no excitement lost. Much like always expecting a good time with Dark Seas, I know to expect good rock music, which I heard plenty of, but at one point in the set, I heard a reggae lick. Between that, a Dick Dale–influenced riff, and Dylan-inspired songwriting, I had one hell of a night.
There couldn’t have been a more appropriately named venue for the bands that took over The Garage this weekend. The friendly, jam-band vibes were high and the crowd may have been higher. Dark Seas never disappoint, Freckles made their mark and Travesura ruled the night—mine at least. Thanks for showing SLC a good time!
Photos: