Tribal Seeds @ The Depot 01.24 with Wakane, Mystic Roots, Through The Roots 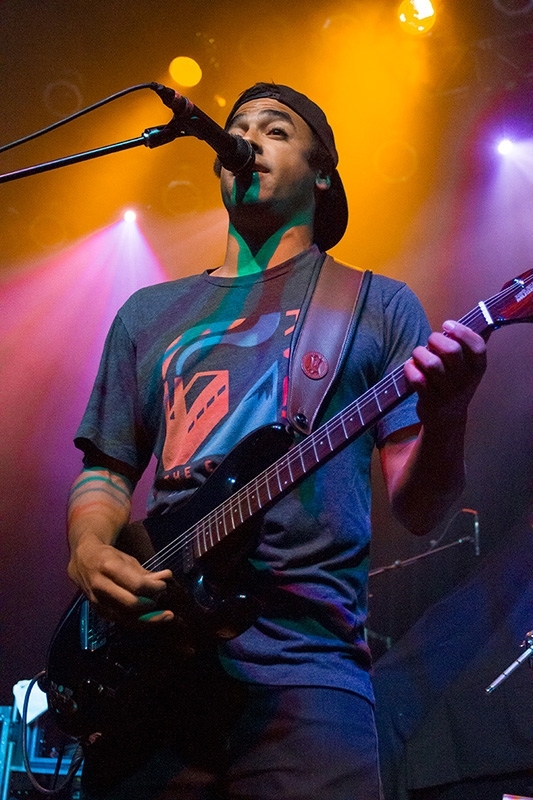 Evan Hawkins of Through the Roots was amazed to see the overwhelming amount of support from the fans in Salt Lake. Photo: Talyn Sherer

Twenty-one and older shows are the way to go at the Depot. There are plenty of places to grab a drink, plenty of servers, and no annoying ass kids. This show was not a 21 and over show, but luckily, the bar upstairs is still open for the older kids so I popped up top and found a nice spot overlooking the few people in the crowd and the cloudy lights shining onstage.

The smoky haze was just starting to thicken as Mystic Roots walked onstage to open the show with a reggae-style cover of Lorde’s “Royals.” I started to roll my eyes before I realized that, hey, this was actually a great cover and much better than the original. The band finished it up and moved into an energetic rendition of “$100 Dollar Bag,” a nice, reggae rap/rock style number evoking fellow Cali rockers 311. Just after finishing up the tune, vocalist/rapper Coot Wyman (Cootdog) told the audience he wanted to perform an exclusive freestyle just for Salt Lake. He asked the audience what he should rap about and some idiot yelled, “weed” to which he replied, “I always rap about weed, what else?” “Snowboarding,” someone yelled (naturally), and he spit some sweet rhymes about snowboarding and snow bunnies without skipping a beat before breaking into an interesting beat-box.

Once the beat-boxing was through, they invited singer/songwriter Wakane to the stage for a few nice numbers that had some heavy dub bass, trippy echoing vocals, and even some really soulful guitar licks. She had a quite a lovely voice that smoothly complemented the tunes they tangled with. The band finished up and exited the stage. By then the air was pretty thick with dank shit, some dude was full-on smoking a cigarette behind me, and the audience below me had filled in quite a bit. I waited in line to grab a beer, and the next band, Through the Roots, started to play as I waited in the massive and growing line for beer. With only four bartenders and hundreds of thirsty concert-goers, it was a bit of a challenge, but I got what I was after and took my seat. Thanks a lot, all-ages show.

I’ll admit right now that while I do enjoy reggae, I think it’s a lot like Mexican food. Just about everywhere you go to get Mexican food has the standard fare of tacos, burritos, whatever, just like most reggae has the standard songs about weed, feeling irie, Jah and makes use of grammatically incorrect personal pronouns. Some places you get your Mexican food are just standard (Betos) while other places knock that shit out of the park (Red Iguana). After years of eating Mexican food (or listening to reggae), most of what you’ve eaten (or heard) blends together in your memory and only a few really great restaurants (or bands) stand out. This means that most reggae is rife with clichés and reggae standards, seldom branching from its—ahem—roots. And on that note, I was amused by the fact that two of the bands who played had the word “roots” in their name. My friend quipped that since we had bands with “roots” and a band with “seeds,” it seemed odd that there was no band with “trees” or “plant” in the name, covering a whole arboreal lifespan.

But anyway, back to the music. Through the Roots is a fairly standard reggae band, though they certainly aren’t the Betos of reggae. I’m sure you’ve heard it or something like it, but probably nowhere near as polished. The band sounded awesome, they had some really burning guitar solos, the crowd was pumped, and a steady dub beat strode along with muted, up-picked guitar strums and solid keys. It was reggae at its finest. The crowd itself was stoned as fuck. Looking over the people in front of the stage you could see constellations of red-embered joints and dragons of smoke being exhaled all around—it was magic. A few dudes behind me started toking up as well, though their fun was cut short but a security guard, who rather than making a big deal about the fact that they were smoking bud, simply requested that they smoke outside.

Meanwhile, my friend and I devised a clever drinking game that involved drinking for each reggae cliché. “Oh, he said ‘Jah.’ Drink!” “Oh, there was an ‘irie.’ Drink!” it’s a blast—you should try some time if you’re not busy puffing magic dragons. My friend also thought he was pretty clever counting each reggae cliché as though he were a Rastafarian version of the count from Sesame Street. “One! Jah, Jah, Jah. Two! Jah, Jah, Jah.” Yeah, we’re a little weird, so what?

Anyway, because of this game, and because of the nature of reggae itself, the rest of the show was a blur. Through the Roots finished up and I waited in a mile long line to grab another beer and I swear Tribal Seeds were halfway through their set by the time I sat down. By then I was a little dazed by the lights and maybe a bit sauced and more than likely a touch ripped from the balmy clouds of chronic wafting about. All I really remember were echoed vocals and sturdy low bass as a nodded my head and grinned like an idiot.

I might not be able to tell you what the fuck happened for the last five or so songs, but I do know that I and I had a great time, and everybody I could see was rocking as well. There was nothing at all to complain about the show, I came out feeling pretty irie myself with the solid rhythms still bouncing in my head. If there’s one thing, it’s that even though I can’t tell you which songs Tribal Seeds played, it might not matter. What I heard was excellent music that stirred me inside. The sounds weren’t anything special, there really wasn’t a lot that sets them apart except for the fact that they were clearly very experienced at providing a full-power reggae experience. What any good reggae band should try to do is make sure everybody had a great time listening to music designed to help people relax and feel all right. Every band that played that night certainly succeeded. Check out more photos of the show by Talyn Sherer here.