00:00 / 20:24
Spotify Stitcher
RSS Feed
Share
Link
Embed
Merrill Garbus of tUnE-yArDs can do it all. She loops vocal harmonies and noises on the spot, drums and plays an electric ukulele. The latter instrument is unique, but it’s nothing compared to her strongest instrument—her voice. 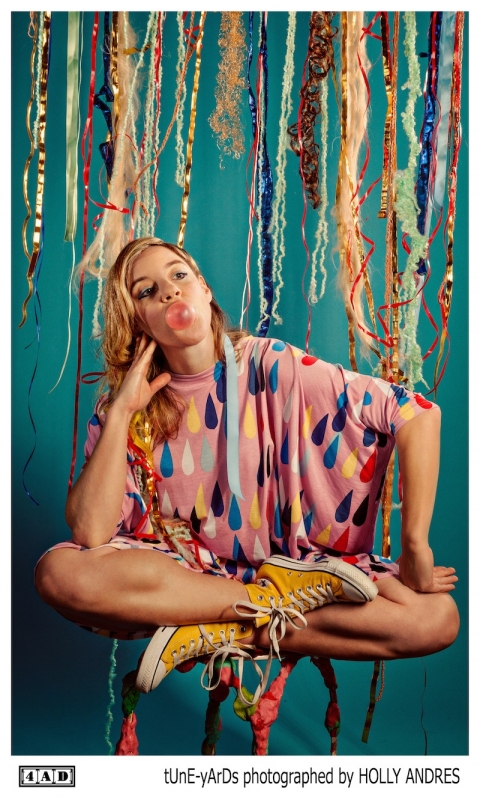 Merrill Garbus of tUnE-yArDs can do it all. She loops vocal harmonies and noises on the spot, drums and plays an electric ukulele. The latter instrument is unique, but it’s nothing compared to her strongest instrument—her voice. To be fair, her strongest elements are both her voice and her personality, and both equally shined during her set. Despite all of her talent and ability, Garbus is anything but a one-person show. She thrived off of her backup singers/band members, and she loved showing gratitude throughout her set. She’s definitely a leader, and people stand behind her in a respectful manner. I remember seeing her opening band Sylvan Esso fist pumping and shouting from behind the merch booth like any ordinary, dedicated fans would do.

Sylvan Esso is a relatively new act, and in an unlikely fashion for the Urban Lounge, they were the only openers, which means that the entire show, including tUnE-yArDs’ set was over by 11:30 p.m. That’s definitely a notable feat for Urban Lounge, and it’s attendees, who are used to headliners opening after midnight.

Sylvan Esso are undoubtedly an EDM act. They’re a male-female duo, with a female lead, similar to Phantogram. Opening for a crowd of dedicated tUnE-yArDs fans is no small task, but Sylvan Esso managed to win over more than a few. The vocalist did her best to keep the crowd at a high energy level, and the flashes of dub beat certainly helped. It was a relatively short set, seeing that they only have one album, and then it was time for an insanely positive and electric set.

In fact, tUnE-yArDs’ set was more of a tribal, artful performance. The stage was covered with cartoonish, Egyptian eyes and a pink banner strung across the back of the stage. It reminded me of something out of Pee-wee’s Playhouse, which was fitting because the show was extremely fun.

Garbus and her band walked out to the kind of applause that a band usually hears after an encore. And, that wasn’t the only time the level of applause was strong enough to induce goose bumps upon myself. Garbus would look back at her band members and smile big before she would break into shouts and birdcalls. Her unique voice instrumentation whipped the crowd into a frenzy. It was as if Garbus was an unassuming cult leader guiding her audience into joyous outbursts through rhythmic, tribal songs.

Her set was diverse from the get-go. She opened with “Hey Life” off of her new album, Nikki Nack, and then went straight to one of her most sing-able anthems, “Gangsta,” which is from her last album, Whokill. As she ranged through her three albums I was able to piece together a bit of whom Garbus is.

She’s basically presented her eclectic style through her three albums, specifically the titles. The titles serve as her alter egos, which she graciously shared with us. Bird-Brains is her most tribal and voice instrumental self. Whokill is her fast talking, and sometimes politically charged, gangster self. Nikki Nack is her most soulful and tender side.

During one of her song breaks, Garbus told the crowd that it’s absolutely surreal to perform her music in front of such a positively charged crowd. She also thanked Will Sartain, the owner of Urban Lounge, for having them as an act so many times. She mentioned that our little city seems to have “more going one these days,” and she also recommended we try the pork pull at Rye, Sartain’s new restaurant next door to the Urban lounge.

Once she finished giving thanks she broke into “Wait For A Minute,” which is one of her most beautiful and accessible songs to date. Surprisingly, the song’s breaks weren’t as snappy during the live performance, but the back up vocals added a new touch.

Aside from this one song, every other number was much more fun to listen to live. Garbus’ tunes can be a bit jarring, but the live performances we’re captivating. Her back up girls we’re wild, and definitely helped to keep things interesting. They added percussion not just through vocal sounds, but by beating trash can lids and congas.

As the set ended, the entire band joined hands and gave a unified bow. Their painted faces and sparkling clothes matched the happiness beaming from their faces. Salt Lake City was just as much of a treat to Tune-Yards as they were to us.