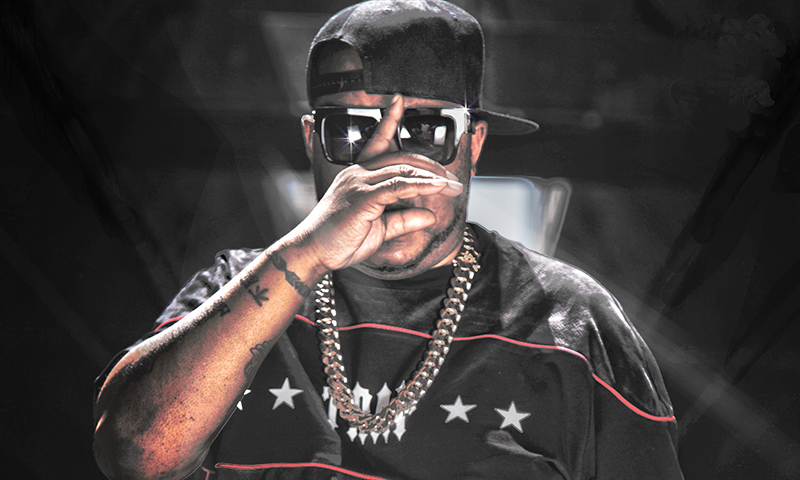 I came up during a time when Twista was at the top of his game. In the late ’90s, you’d be hard-pressed to drive past a car in my neighborhood that wasn’t bumping “Adrenaline Rush” from its speakers as it cruised down Halsted, Cicero or Harlem Avenue; and as with any localized following, it branched out into different directions with more acts being added to the fold every so often. By the time the new millennium rolled around, Twista, the Legendary Trackster, Do or Die, the Speednot Mobstas and Johnny P were known far beyond the Chicagoland area.

I ran into Johnny P at an open gym in the south suburbs of Chicago a few times. He was diminutive, had finger waves in his permed hair and always had his cousin with him if he wasn’t surrounded by a bigger entourage. One night, when my crew and I were waiting to play the next pick-up game, my friend Brandon bounced a ball off his shoe and it rolled on the court while Johnny was playing. He didn’t take too kindly to the interruption, and in an instant, my first and only “rap beef” began. It was squashed in an instant, though, as calmer heads prevailed and everyone went about their business. I saw Johnny in passing years later, and he greeted me with a smile and a handshake. He looked well. Driving a cherry-red coupe, sporting his signature hairdo, grinning and sharply dressed, he showed no signs of what was to come. His soulful crooning was well-known nationwide by then, and I was just happy that he didn’t dis me in front of my lady friend at the gas station (after I said I knew him when we spotted him from the car). Little did I know that Johnny was a childhood prodigy—one of the youngest artists ever signed to Columbia Records, he toured with Whitney Houston, The Jacksons, Michael Bolton, Jeffery Osborn and the New Kids on the Block in the late ’80s. This lead to a deal with Rap-A-Lot Records and his timeless work with “the Mayor” of Chicago’s West Side.

The last time I saw Johnny P, it was on YouTube, and he was not doing well. Apparently, he had been singing outside of liquor stores for money. His hair wasn’t done. He didn’t have the same light in his eyes, and I could tell he had been through a lot of shit. I had hoped that he could turn things around, but shortly thereafter, he passed away at the young age of 44, which is practically ancient in music terms, but for the average human? That’s way too young to go. Johnny could very well be crooning his signature “whoa” on tour with Chicago legends right now.

Sunday, May 27, at The Complex was a mix of different styles, generations and sounds—not only onstage but among the crowd as well. It started off with Zac Ivie, who was assisted by his peers, AZA and Shanghaii. The trio blends well despite having different styles and personalities—Ivie is more of the chopper with techniques, Shang is melodic and introspective, and AZA is off the wall with a unique flow and cadence. In the background regulating the sounds was Tobi Ali and Stickee of ClearSauce music. After that came young Devena (backed by Bacca from Atlanta), who handled hype-man duties. Sharing a venue with more established artists didn’t seem to faze them at all. The pinnacle of the performance was when Devena stopped one of his songs to spit a freestyle verse. Contemporary sounds and styles (but not mumble rap) with a little edge is how his music could be described.

Preceding the headliner was EMRSN, previously known as Emerson Kennedy, and boy did he put on a healthy show. Impressive crowd control and stage presence are some of his strongest traits. He had to have burned at least three thousand calories in his short set as he bounced about in a black T-shirt, black jeans, gray-and-white shoes and what looked to be purple ankle tape at the bottom of one leg. EMRSN is known in the Utah music scene as a battle rapper, but since his move to California, he’s grown as an artist and performer while still employing the same sharp wit and introspective mind with which he’s lit up leagues across the country. He performed a few songs but the most memorable were “Say No More” and “Key to Life.” EMRSN uses many flows and tempos but he seems most comfortable at a faster pace with his content reflecting his life experiences. Even though rappers in the valley don’t get much national recognition, Utah has a few rap icons and several up-and-comers—but no one knows what the future holds in an industry that’s as shrewd and unforgiving as they come, even for weathered veterans.

Twista started out as Tongue Twista and, you guessed it, he was always known for his rapid-fire lyrics and vocal dexterity. He was, at one time, the Guinness World Record holder for spitting fast—598 syllables in 55 seconds to be exact. If you listened closely to his rhymes, you realized that he wasn’t just spewing gibberish; he was telling stories—tales that catered to a group of people who were enamored by a Chicago accent in addition to international fans. He came out and let that fact be known with four straight blockbuster features: “Spit Your Game” with Biggie (posthumously), “Like a Pimp (remix)” with David Banner, “Let’s Go” alongside Lil Jon & Trick Daddy and “Is That Yo B*tch” with Jay-Z. Like an auctioneer high off pre-workout and espresso, he went through a cache of classic hits that still evoke the same head bobs and sloppy recitals as they did years ago (because few could keep up with that pace).

Then, in a blue shirt with gold details and white-and-gold Allen Iversons, he brought the pain “like two bad nurses” and went into the classics that brought his skills into the national spotlight—the songs that we played in pristine Oldsmobiles on our way to the “nine ball” (or 79th Street) before hitting Lake Shore Drive en route to Rock n’ Roll McDonald’s and Navy Pier. It made me feel like I was back home for just a moment, until Twista paid homage to the deceased singer before a rendition of “Po Pimp,” and I remembered that Johnny had passed away.

So who makes it to the promised land like Twista? Who falls off and becomes a victim to their vices? Who turns their rap career into a lucrative side hustle? There is no way to gauge, but one thing is for certain: Getting caught up in the fast life that comes with being a performer is a dubious endeavor. Musicians (and people in general) tend to refrain from talking about the circumstances surrounding the deaths of their colleagues. Hardly anyone performs a song about losing their friend to addiction at a concert because it’s a sure way to throw a wet blanket over the whole party—but it is a necessary conversation. We’ve lost too many great people to something so preventable. I don’t want to hear about another person losing their life to that dope. I don’t want to see someone I once wrote about or admired being put on the internet as a spectacle either. You’re special to us (as readers, artists and consumers) and we want to see you at shows until you’re rocking orthopedic retro sneakers!