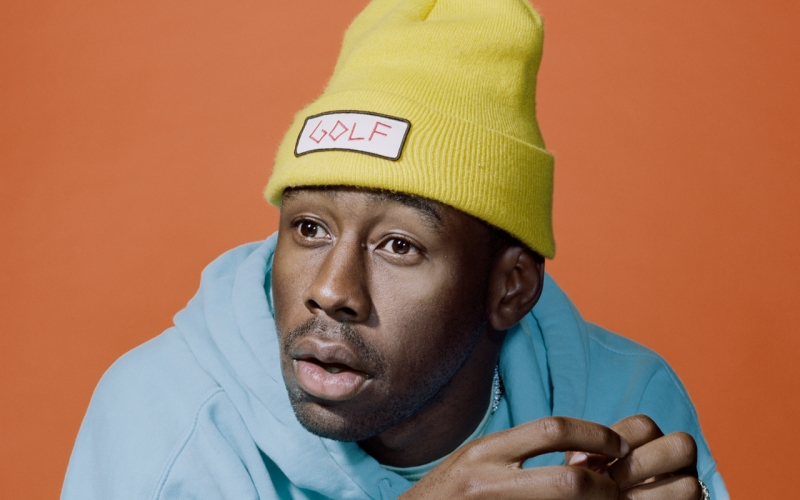 Tyler, The Creator: Over Before it Started

The sold-out all-ages crowd at The Complex swarmed like a pubescent, freshly-in-high-school hornet’s nest. White kids impatiently smoking their cigarettes casually dropped the n-word and talked about the recent Supreme Court decision on gay marriage and the prospect of marrying their “best homies.” All the while, an enthusiastic chant of “fuck her in the ass” drowned out the pre-concert house music. A few people stood idly in the 21-plus section like isolated zombies awaiting a beckoning noise.

The concert began at 8. Taco Bennett took the stage to foundation-moving cheers. His outstretched arms and head pointed to the sky looked as if he was giving alms to the large pink Superjail!-esque pig head from Tyler’s 2015 album Cherry Bomb, which was projected on a large screen behind him. Bennett played a myriad of well-known rap songs infused with deep techno drops. He cut the music often, allowing the crowd to sing along–however, it happened so often that it disrupted the flow of his set. The only time Bennett spoke through his mic was when giving a count-down leading to the bass drop and seizure-inducing strobe lights.

Just when the techno started to become a little too overdone, Tyler, The Creator and Jasper Dolphin jumped onstage. The dense mosh pit in front of the stage outstretched their arms and women lifted their shirts. “Why’re you showing me your tities?” asked Tyler. “The concert hasn’t even started yet.” Tyler’s no-fucks-given, tell-you-how-it-is attitude is one of the main reasons he is so popular (on their Adult Swim show Loiter Squad, Tyler, Earl Sweatshirt, Jasper and Taco act accordingly.) “Can I have all the black people yell?” Tyler said after asking if Mormon’s have multiple wives by the age of 23. Half-hearted cheers rose up from isolated pockets. “Oh shit, we’re outnumbered,” said Tyler. “Jump around or pretend you like this song,” he says flailing his limbs and jumping the moment Death Camp began roaring over the speakers. Excitement gripped the audience and a Misfits-esque mosh pit formed: pushing, shoving and punches rained down to the meter of the song. The majority of the songs played were from his new album, but old favorites like “Yonkers” and “Bitch Suck Dick” also made it onto the setlist. The whole event was centered around his well-known antics and constant squablles with the audience. The raps through the mics were often incoherent and–due to the overall quick concert–felt hurried. As quickly as the lights flooded the stage and the excited onlookers emanated a body-shaking cheer, the music was cut, the lights went down and the set was over. Disbelief mixed with uncertainty crept over the faces of the patient concert-goers. Then, the house lights came on and the rapturous conversations which were loudly broadcasted before the show were resumed. “My bitch suck dick like she sucks dick,” and “fuck her in the ass” were chanted by a few holding on to these nostalgic memories.

The concert ended at 10. The loose confederation of people in floral shirts with crew socks and pastel colored pants disjointed from the overall unity and scattered. Breasts were hastily tucked back into their close-fitting tank tops. The largely under-21 crowd quickly turned and began frantically trying to find their cars. The excitement that built up through the concert could not fully die down, since the concert only lasted about an hour. Young women emphatically debated about which of the group would be a better husband while the crowd quickly dispersed into the calm, freshly-night street. Tyler, Jasper and Taco put on a show made simply to satisfy.

There is, however, no doubt that Tyler and Odd Future are full of talent. In April they released an app called Golf Media App–effectively connecting the artist to his fans. Tyler also owns his own product line, which was emphatically at the concert, as well as his own  festival called Camp Flog Gnaw in Los Angeles. If Tyler, the Creator returns to Salt Lake with more time, his concert will definitely be labeled “a must.”